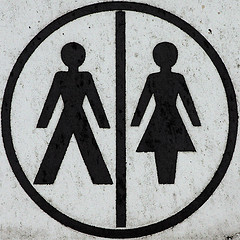 So when IS the right time to come out as trans?

Boldly Go considers the way trans* people are expected to present their gender and identity by a cissexist society, in light of the story of a trans girl being denied access to the girls’ restroom at school in the US.

There’s really no way you can win.

If you’re a trans* adult and you want anything in the way of treatment, you have to meet a certain bar of “seriousness”. You have to be binary identified (i.e. only identify as “male” or “female”) and you have to meet their expectations of what that means. If you’re a trans woman you’re expected to be feminine. If you’re a trans man you must be masculine. Violate traditional gender roles or admit that your gender is maybe more complex and no treatment dice. Because there’s so many individuals willy nilly requesting hormones and surgeries, they’ve got to make sure you’re SERIOUS.

Cue the expected anecdotes about how you “always knew” you were trans, about how you put dresses on your GI Joes. The pressure to have “always known” from a very young age hangs over you like the ultimate trans litmus test.

But then, you’ve got a six year old transgender girl, and what do they do? Deny her access to the female restrooms in her school. Some of the first comments and reactions I see from cis people? “Six is too young to know that you’re trans”.

Hold the phone. We should always know, because if we have any doubts we won’t get treatment because that’s a sign we’re not “serious”. But yet, when a little girl has the ability to say who she is, well… six is too young to know. After all, you’re just trying to protect her.

Maybe somewhere there exists these mythical cis parents who would do their darndest to convince their child that they’re trans (and should come out publicly as trans). Because no therapist, who they’d have to get their “pretend” trans child to see to get any form of treatment, could easily tell that.

We must protect trans children from the totally logical and real phenomenon of these abusive cis parents. That’s definitely more likely than abusive cis parents, siblings, and peers who see a child they think is a boy wearing a dress and beat them up.

That’s not likely, after all. It makes more sense to cause the girl the harm of being misgendered and ignore her own words about her identity, because then we’ll be sure her parents aren’t abusing her by… letting her be herself.

I could use myself to explain why “biology” isn’t as simple as people think… but then again I feel like I’m submitting myself for cis approval. My own experience of gender and my own identity is not clear cut enough for me to “pass” as trans in ways cis people approve of. I’m the diet coke of trans. Just one calorie. Not trans enough.

It kills me how we don’t blink to deny trans women access to female restrooms and have no problem with making them a casualty of a rape culture that’s so endemic, women can’t even share a bathroom with men without the threat of rape. We pretend a “female” symbol on a door is rapist kryptonite. That cis men have needed to “pretend to be women” in order to rape both trans and cis women (and how quickly in this narrative we’ve forgotten that most people are raped by people they know, not strangers hiding in a bush/restroom).

Because the second we allow trans women access, cis men will take that as an invitation, and what then? Then rape will be women’s own fault! Perpetuating the idea we can blame women and that cis men aren’t responsible for who they rape, regardless of what sign hangs on a door, is just absurd. If a trans woman is forced to use a male restroom by a cissexist society and is raped or beaten because of it, that’s also misogyny.

So six is too young but we must always know. Maybe I should just come out and ask… what would be a good time for you, cissexists? What is the optimal window for trans people to come out? At what point will you stop the concern trolling, misgendering, and policing? I’d like to know – especially from people who more likely than not do not understand what it’s like to be trans* – when I should take my own feelings seriously.

Because all children are gender neutral and unaffected by social pressures until they say they’re trans, right? It’s not like the world aggressively socialises children based on gender from the day they’re placed in a pink or blue basket. But we should only worry about abusive parents controlling their child’s gender the day they say they’re trans. The feelings of trans children and their bravery to come out despite the enormous pressure to be cisgender and “normal”… well, that’s inconsequential.

So please, tell me. What would be a good time for you?