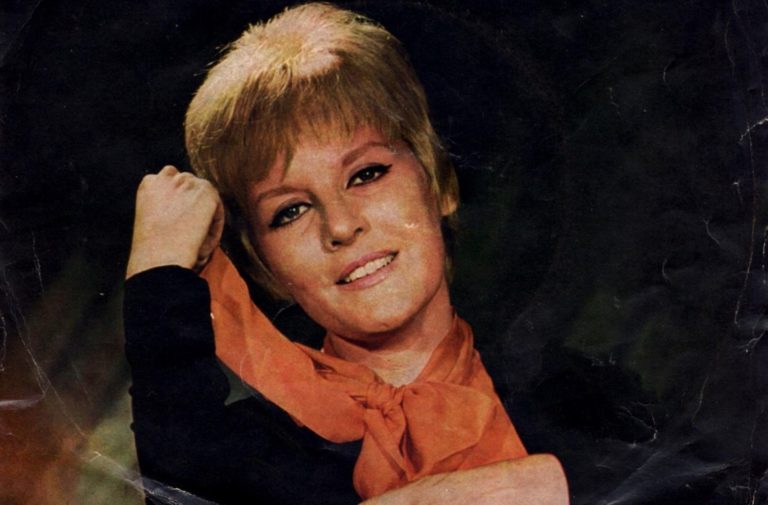 The early 1960s was the heyday of Goffin and King, Phil Spector and girl groups who sang gorgeous, swooning songs of love and longing and heartbreak. The Shirelles wondered whether their boyfriends would still love them tomorrow and The Crystals were all aflutter over being kissed.

‘Downtown‘, however, with its big band bravado and uplifiting lyrics is a different kind of song. The protagonist isn’t injured or heartbroken; she’s happy to be alive. Yes, she might be in love but, if she is, it’s with the city.

By 1964, the year that ‘Downtown’ was released in the UK, Petula Clark had started composing and was responsible for the soundtrack to A Couteaux Tirés. (She would go on to compose the music for 1969’s Animato and 1966’s La Bande à Bebel, as well as a number of tracks throughout the 1980s and ’90s.) However, like many pop singers of the time, Clark was not writing the songs she performed; ‘Downtown’ was written for her by Tony Hatch. The story goes that Hatch presented it to her in its half-finished form on a visit to her flat in Paris, after she had rejected all the other songs he’d offered her. She liked it and told him to go and write lyrics as good as the tune, which he most certainly did. When it came to recording the song, Clark’s interpretation of those lyrics made it completely hers; she owns it with her powerful, soaring vocals. It’s a barnstorming piece of music and the kind of song that makes you want to punch the air and belt out the words when you hear the chorus.

At the time it was fairly unusual subject matter for a pop song and in some ways is more in the tradition of Cole Porter, George Gershwin and Leonard Bernstein. Among the other big female pop hits of 1964 were Mary Wells’s ‘My Guy‘, The Supremes’ ‘Baby Love‘ and Cilla Black’s ‘Anyone Who Had a Heart‘. These are all classics, of course, but men and relationships are very much centre stage in all of them. ‘Downtown’ invites us to look away from these concerns, away from the things that might be making us feel sad and lonely, and to look outwards to the streets, where “everything’s waiting for you”. Not only is ‘Downtown’ a celebration of the city, it’s a celebration of agency. “Don’t hang around and let your problems surround you” Petula Clark tells us. Get out there and see what the city’s got to offer. This place – with its noise, bright lights and movie shows – is a place of excitement and freedom; you can hear possibility in the song’s opening piano and exhilaration later on in its thrilling big-band break. Optimism shines through and Clark finds beauty and inspiration in the sights and sounds: the sidewalks, the music of the traffic, the neon lights.

The song posits public space as a site of solace and there’s a kind of utopian sensibility here, made particularly special by the fact it’s a woman singing. Pop songs sung by women often have lyrics associated with private and domestic concerns but this is rejected in ‘Downtown’. The possibility of love is dangled before us at the end of the song – “and you may find somebody to help and understand you” – but it’s left non-specific. This person could be a lover, it could be a friend. Either way, nothing’s going to happen to you if you’re sat at home on your own – you need to get out into the streets and make it happen.

Eli Davies is a teacher and writer. She blogs at elidavies.wordpress.com and tweets from @EliDavies.

Left: German issue of ‘Downtown’ single with ‘You’d Better Love Me’ on the B-Side. This shows a picture of Petula Clark in an orange ruffle collar shirt and black jacket, against a black background. Her left hand is across her chest and her right hand is holding up a length of the ruffled collar of her shirt. A white strip across the top of the record shows the song titles in pink, ‘Petula Clark’ in blue and ‘Vogue’ (the record label) in white on a black oval shape.

Right: Danish issue of ‘Downtown’ single with ‘Baby It’s Me’ on the B-side. This is green and has a black and white drawing of Petula Clark with her hands clasped together overlaid on the left. All the record information (including an unreadable catalogue number) is written in black on the right.

Black and white film with ‘Melody Variétés’ written in the right-hand corner. The film briefly shows a nighttime city scene (including a building with an ‘Embassy’ sign) faintly overlaid with more city lights rotating in a clockwise circular motion.

Petula Clark sings in a shiny black high-collared PVC coat with blurred lights behind her and a breeze running slightly through her short blonde bouffant haircut. The misty rotating overlay encircles her. Most of the film shows Petula Clark at head and shoulders level and there is a switch to a dark and unclear background scene during the first chorus.

At 1.53, the rotating overlay becomes a circle made up of six Petula heads singing the ‘Downtown’ backing at the end of the chorus. These draw in closer before Petula comes back in at 2.11 to sing “And you may find…” At 2.46, the circle is made up of eight heads. This draws in even closer until the end of the film.