This gayby is just for laughs

Gayby. See what they did there? It’s like “baby”, but with “gay” mashed onto the front. Get it? The film is about a straight woman having a baby with her gay friend. Well, if you’ve wrapped your head around that wordplay, you probably have a decent insight into the level that Jonathan Lisecki’s Gayby operates on.

Jenn (played by Jenn Harris) is a single woman in her thirties who realises she wants a kid, so she asks her gay best friend Matt (Matthew Wilkas) to father it “the old-fashioned way”. That’s right: for briefly explained and barely comprehensible reasons, Jenn demands that if Matt agrees to help her, he’ll have to have sex with her. For equally unscrutinised reasons, Matt readily agrees.

This scenario is made all the more implausible by the excruciatingly awkward sex scene that follows. Neither of the friends is comfortable; they lie in their underwear, not looking at each other, barely talking as they contemplate what they are about to do. Presumably this is supposed to be hilarious, but it just left me baffled. If having sex with each other is such a difficult and unpleasant experience, why on earth have they deemed it necessary? Following several weeks of dutiful yet unsuccessful copulation, Jenn decides they should switch to the “turkey baster” method. Having witnessed their attempts at making a baby up to this point, it is hard to see why they didn’t go this route from the start. 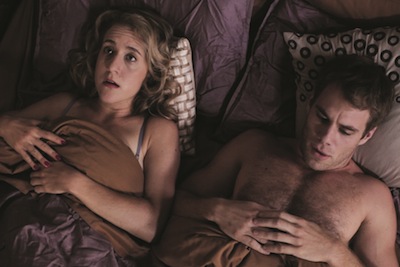 Gayby has two elements that make this reviewer roll her eyes. The first is the woman-of-a-certain-age-needing-a-baby trope. Perhaps women in movie land aren’t allowed to not want children once they are 35? I realise the very premise of the film requires Jenn to want a baby, but there are no balancing voices of dissent. The only other female character whose home life is explored is Jenn’s sister, who is in the process of adopting and therefore brings her share of OMGbabies to the table. Money is barely discussed and when it is, it transpires that Jenn has a trust fund for the purposes of supporting a baby. This and the large apartments show us how privileged the friends are.

I’m all for positive depictions of alternative parenting and family units, and, in fairness, Gayby is about the celebration of an untraditional union. It doesn’t insist that Jenn needs to be in a relationship to be a good mother; it respects her choice to do what she wants, which happens to be procreating.

But before I get too caught up in praise, I’d better cover the second irritating element: the stereotype of the gay man. Gayby is clearly a gay-friendly film, so why does it give us exactly the same caricatures of gay men we see in the most obnoxious mainstream offerings? There are several gay characters and, to varying degrees, they manage to be camp, bitchy, well-groomed and promiscuous.

Sure, there are gay men who sashay, wear cravats and drink white wine with their “hags”, as Gayby delightfully calls women who hang out with gay men, but there are also gay men who don’t. If you direct a film in which four primary characters are gay men, with a number of further one-scene appearances by others, you can afford some diversity. The closest Gayby gets is with Nelson, Matt’s best friend (played by director and writer Jonathan Lisecki, below with Matt Wilkas), who is in the process of restyling himself as a bear. The joke here is that his high voice and camp mannerisms keep betraying him: not exactly mould-breaking. 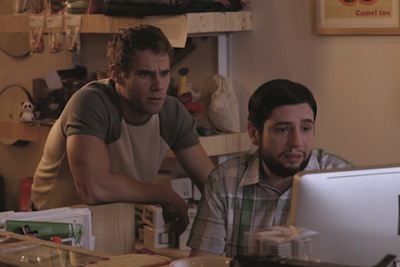 Then again, Gayby isn’t supposed to be mould-breaking. It’s not trying to make a political statement or examine the deep and challenging questions about identity, family and gender roles that could be implied by the subject matter. In fact, it’s so obvious that Gayby is just trying to be a sweet, funny film, that criticising it for not being subversive enough is like denigrating somebody doing a fun run for not running quicker. As much as the above criticism is important, I need to say that Gayby manages what it is trying to achieve with success.

The priority is to give people the warm fuzzies, whether through witty one-liners, physical comedy or feel-good scenes. And so I laughed a lot, even while noting that many of the shorter scenes were clearly set ups for a single excellent punchline. When Jenn has sex with her bizarre decorator, the montage of their energetic romping is fantastic and I was delighted to see him go down on her, in a way that still seems to be taboo in mainstream cinema. Harris in particular is skilled at comic acting, with her perfect facial expressions and deadpan delivery making many of the scenes. Lisecki also manages to steal the limelight from the main actors on several occasions, with comebacks and timing making Nelson one of the characters I warmed to most.

Gayby isn’t going to change the world, but it isn’t trying to. I would have liked a more plausible plot, more varied characters and more debate. It’s a film with laughs and happy endings and as far as it went, I enjoyed it – but I think we’re going to have to wait a bit longer for the revolution.

Gayby is released on DVD on 11 March by Peccadillo Pictures.

The images are stills from the film, courtesy of Peccadillo Pictures.

Megan normally reviews plays, but she enjoyed being able to pause the film and make tea so may reconsider. She also managed to watch this with a gay man without asking him to father her children at any point