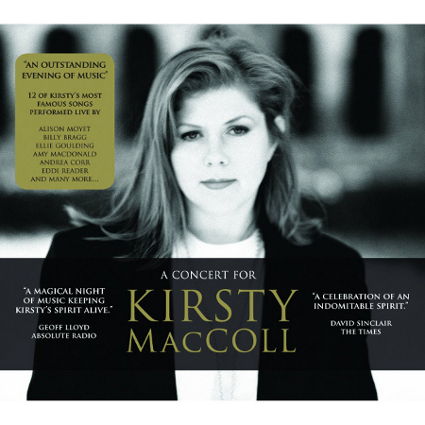 More than a decade after Kirsty MacColl’s death, two albums have been released in her memory. Liz Ely asks: do they bring us anything new or different?

Say “Kirsty MacColl” and many people would think of either her Christmas hit with The Pogues or her cover of ‘A New England’ but there is much more to be discovered in her back catalogue. Coming from a musical family with a background in folk, she continued in this vein in many of her songs but also had roots in punk (her first release being her appearance on the ‘Drug Addix Make a Record‘ EP). She delved into Cuban styles on her final album, Tropical Brainstorm (including the well-known ‘In These Shoes?‘) and those of you who grew up in the 1990s might remember her getting airplay on dance music shows with the various mixes of her hit ‘Walking Down Madison‘. Cazz posted a Song of the Day piece about this track back in the summer commenting on it as a “true ’90s song in that it perfectly captures that early ’90s sense of unease and drab disappointment in the UK”.

When reviewing the recent compilation A New England: The Very best of Kirsty MacColl (alongside A Concert for Kirsty MacColl), our reviewer Liz Ely also takes the view of this as a song that was very much of its time but sees it as more of a let-down, due to its earnest intentions.

Another song MacColl was involved in that had earnest intentions is Billy Bragg’s ‘Sexuality‘. Again, this song’s sentiments are perhaps very indicative of the time it was released but, like ‘Walking Down Madison’ I’d say it still seems relevant today. Unfortunately, the two album releases covered in Liz’s review don’t include ‘Sexuality’ (perhaps due to it being more firmly remembered as a Billy Bragg song in the public eye, unlike ‘A New England’, which has arguably become Kirsty MacColl’s). However, another song of feminist relevance included on the Best of is ‘Bad’ (included below), which Liz describes as “Thelma and Louise, filled with rage and frustration and about to go on the run”. There are also plenty of other possible feminist tracks to be discovered if you haven’t yet looked into Kirsty MacColl’s work more widely.

Here’s an excerpt from Liz’s review:

“As Kirsty MacColl fans go, I am probably fairly young. When she died in 2000, I knew her as “the woman who sang that Christmas song with the Irish guy with bad teeth”. Like many younger women, I have discovered her music posthumously and her wistful lyrics and easy melodies have become a part of the soundtrack to my life. Songs such as ‘They Don’t Know‘ and MacColl’s (in my opinion better) version of Billy Bragg’s ‘A New England‘ were a big part of my late teens and early 20s.

MacColl’s music is by turns funny, ironic, haunting and poppy. Lyrically, her songs may not seem explicitly feminist but she displayed a refreshing raw honesty and truthfulness about her experiences. Many women will recognise aspects of their own lives within her work, from the regret over a betrayal of friendship expressed in ‘Caroline‘ to MacColl’s contempt for deceitful pick-up artists in ‘England 2 Columbia 0‘…”

Front cover of A Concert for Kirsty MacColl. This is a blue-tinged black and white head and shoulders shot of a slightly smiling Kirsty MacColl in a black jacket and white T-shirt, standing in front of an out-of-focus building.

This is overlaid by the album details:

2) A strip, just above the bottom of the picture, containing the following writing in caps: “A magical night of music keeping Kirsty’s spirit alive (Geoff Lloyd (Absolute Radio)” [left side of strip], “A Concert for Kirsty MacColl” [middle of strip] and “A celebration of an indomitable spirit” (David Sinclair, The Times) [right side of strip].

Static shot. A very small copy of the back cover of 1993’s ‘Titanic Days‘ against a black background. This shows grainy black and white head and shoulders shot of Kirsty MacColl (possibly lying on a blanket). The tracklisting and other details are barely readable but can be found here.