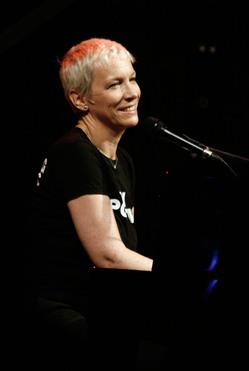 In a powerful video, Annie Lennox has called for an end to gender-based violence.

She talks about spending time in South Africa, and in particular about the rape and murder of Anene Booysen which had been in the news. She attended a demonstration in memory of Anene, and found that the media only attended because she – “somebody with a name” – was there. The rape and murder of a woman is so commonplace that the only media interest was due to the presence of a celebrity.

Annie and a friend decided that they wanted to, “inspire people to wake up to the situation that’s taking place”. She talks about why she feels this is such an important issue for her, saying,

“I’m focusing on gender-based violence because I’m a woman, and I’m a mother, and I was the daughter of a father once. I feel connected to the victims and survivors because of my gender. It makes my colour irrelevant – it is my gender that is my connection with this”.

“We must start to make people accountable. We must start the dialogue so that people like Anene Booysen, the victims of these crimes, are never forgotten. It’s simply an issue of human rights”.

The petition implores South African media, key government officials, and religious leaders to make a commitment of personal and professional responsibility, in order to ensure that the issue of gender-based violence is never marginalised again.

Click the following link to read the Video Transcript by Laura

Hi, this is Annie Lennox. On Valentine’s Day, a few weeks ago, women across the globe took part in a unique event: One Billion Rising. As Eve Ensler said, the issue of gender-based violence will never be marginalised again. On International Women’s Day 2013, I have a message.

[TEXT] For the sake of Valencia Farmer…

And every victim and survivor of sexual violence.

South Africa has an outstanding legacy of activism that is renowned all over the globe.

Everyone refers to the end of Apartheid in 1994 as an achievement as significant as the 1865 agreement to abolish slavery in America.

These events weren’t simply miracles that occurred by themselves. It took collective effort, courage and vision to achieve those goals.

Nineteen years since the end of Apartheid in South Africa, and there are still many obstacles and challenges to be overcome.

End violence against women and girls

I’m in London right now, and I’ve just come back from South Africa, where I spent a few months. And not so long ago, there was the most outrageous case of rape and abuse and murder of a young woman called Anene Booysen, 17 years old. And it was so horrific that it’s gained attention in all the media, all the press, so that people were all talking about it, because it was that bad. And the tragedy is that it sometimes takes a case that is that extreme for people to start waking up and remembering that the issue of rape and gender-based violence is absolutely endemic, right across the whole country.

So, I read in the paper that there was going to be a demonstration held on the steps of St George’s cathedral, which is right in the middle of Cape Town. And for the whole day I thought “Shall I go to it, shall I not go to it, what shall I do?” and then I decided that I absolutely had to be there, just by myself, you know. I mean I didn’t come with anyone, except that I called up a friend of mine who’s called Rhoda Kadalie, and Rhoda and I went to the demonstration.

After the demonstration – which was beautiful, very silent and dignified, small, but very moving – after the demonstration Rhoda and I walked down the street and she said to me that media had shown up – only a few – just a few papers and one television station and she said “You know, they came because they heard that you were gonna be there”. And on the one hand I was really pleased that the media were there, and on the other hand it really made me sad, because the issue itself has become so, um, marginalised in a way, in terms of the fact that it’s so commonplace that it took somebody with a name, which I have, to show up and be present for other people to come and to try to give a voice to what was happening there. So, Rhoda and I decided that we wanted to do something.

We decided that we wanted to inspire people to wake up to the situation that is taking place. People in South Africa are fatigued, they’re exhausted, they feel somewhat desolate and despairing really, because they’ve seen that the leadership in this country has been failing them for many years and that very often the issues that they’re facing every day are sidelined and they just carry on. And the people that live nice lives there are living in a nice bubble, and the ones who are outside of that bubble are living in really difficult circumstances.

The factors that contribute to abusive, dysfunctional behaviour – violence, sexual abuse, rape , these kinds of things – are many fold. And in my view, it starts with poverty. When people are living in completely inhumane conditions, where they are living in crowded shacks, in informal settlements and townships, people are very very close together, the children are very often exposed to things that should have boundaries around them so they don’t see that happening. They see things that shouldn’t happen, and they pattern them in their own behaviour and they become not only the victims, but when they grow up they start to become the perpetrators of these things too. As you drive from the international airport in Cape Town into the town itself, you pass the township of Khayelitsha, which is one of the biggest ones there, and you know that a huge percentage of the young men that live there have no future, they have no hope, they’re not employable, they haven’t had education, they haven’t even passed XXX, and there are issues with guns and violence and drugs and alcohol, and all of this plays into the bigger picture of abuse.

Things happen in a way that should never take place. And it’s hard for me to talk about it here because they’re so shocking and unthinkable that, yeah, it’s hard to talk about, but I will talk about it now on camera because it’s part of the reason why I feel so strongly about the situation of violence. Of course I’m focusing on gender-based violence because I’m a woman, and I’m a mother, and I was the daughter of a father once, and I feel connected to the victims and survivors because of my gender. It makes my colour irrelevant: it’s my gender that is my connection with this.

There are many instances of abuse that start from the age of zero, from new born babies all the way up to elderly women, and it’s not rare. It’s commonplace. It’s happening. There are instances of abuse taking place between teachers and pupils, members of the police force – who should be supportive and protective of people coming in to the police station to say that they have been raped – are very often the secondary rapists themselves. And this happens on a national scale. It urgently, urgently needs to be addressed. Many of the people who have been raped, when they take their case to court it gets pushed out. The perpetrator gets off. And so there’s a sense of impunity, that this kind of level of violation can be done and there’s nothing, you won’t be… there’s no punishment, in a way for that. This urgently needs to be addressed.

The system itself needs to have a sensitive structure that deals with these issues as they happen on a daily basis. It is completely wrong that a victim of these crimes goes to a police station and is abused, almost as if they were the ones who were the abusers in the first place. I don’t have the answer, because the issue is so complicated that, you know, it requires many, many actions.

Our long-term goal is to centralise this issue of violence and rape, so that everybody knows about it. We must take it out from the shadows and we must start to make people accountable. We must start the dialogue, so that people like Anene Booysen, the victims of these crimes, are never forgotten. It’s simply an issue of human rights.

If I were to try and simplify the message of the Make It Happen petition, it would be pretty simple in actual fact. We need to take the issue onto the table, and we need to make sure that it stays there. We need to inspire people to become personally aware and personally responsible, especially if they are in important positions in the media and in government and in religious groups, where they are looked up to, you know, they’re very influential people. They cannot just live in that country and act as if this is not happening. They have to make the change happen, we have to collectively be responsible for it.

[TEXT] Make It Happen. End violence against women and girls. A call to action! From Annie Lennox.

Many people feel fatigued and disillusioned. They don’t think anything will change for the better.

They have lost faith in politics and the criminal justice system, and are despairing of false rhetoric that offers empty promises without delivery.

But the problems will never go away by themselves.

It will take the same strength of purpose to create lasting and impactful transformation.

BUT… it is achievable…

We believe that gender violence CAN and MUST be tackled.

We need to create a tipping point of collective awareness and action to make it happen.

That is why we are appealing to EVERYONE working in the media and civil society to make a commitment to take personal and professional responsibility to become a part of the change. Together we can all bridge the gap between the victims, survivors and solutions.

We implore you to promote the efforts of organisations working to ensure the issue of gender-based violence is never marginalised again.

It is vital that you play your part in making the change.

[The image is a photograph of Annie Lennox smiling against a black background. It was taken by Manfred Werner and is used under a Creative Commons Licence]