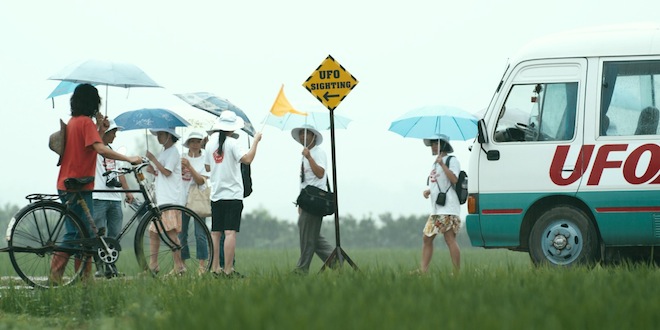 New review: UFO in Her Eyes

On the steaming hot day of 11 September, 2001, shortly after making love under an ancient camphor tree, a 35-year-old Chinese woman Kwok-Yun spotted a UFO above the hills of her village. Or at least that was the story she told her folks, which triggered the chain of unprecedented events in Chinese born director Xiaolu Guo’s latest film, UFO in Her Eyes (2011).

Considering her young age, Xiaolu Guo is an extremely prolific artist and her previous two feature films were adorned with prizes, including the Grand Jury Prize for best feature fiction for How is Your Fish Today? at the International Women’s Film Festival in Paris in 2007.

Our regular contributor M. Lý-Eliot enjoyed UFO so much that she was delighted at the opportunity to interview Xiaolu Guo, even if only via email.

“Was the little pig towards the end of the film actually slaughtered?!” asked M., a dedicated vegetarian, somewhat disturbed. “Pig, of course, we killed it and ate it for the dinner,” answered Xiaolu Guo, unfazed. “How can one eat meat in everyday life and be in denial of killing animals? Only Hollywood will do that.”