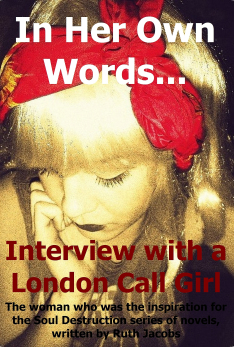 MarinaS argues reading In Her Own Words is more than a debate of for or against sex work. She argues that we should read it because it is a captivating story of an interesting person.

“[I]t’s an awful experience. You feel like you’ve been raped the first few times you do it. It’s very hard. […] I have got hardly any respect for my body anymore. […] I find it very hard to mix with normal people, people who don’t know what I do.”

Sex work or prostitution is the Rorschach test of Fourth Wave feminism. One’s position on the issue of legalisation of sex work – and whether one calls it sex work in the first place – is a generational and cultural marker that signals which side of the line in the sand feminists stand on: dour, hairy radfems this side, flighty funfeminists this way. To the left, Birkenstocks & dungarees, to the right, high heels and Cath Kidston pinnies.

I exaggerate the stereotypes for effect, but also because they are largely untrue. Created by a mass media fundamentally hostile to feminism and pitted against each other in an internecine simulacrum of the “Mommy Wars”, these division are, once one gets off Twitter, largely illusory. On both sides of the debate there is a deep commitment to the well-being and sexual agency of all women, and the argument is predominantly about means, not ends.

To read the full review, please click the link here.