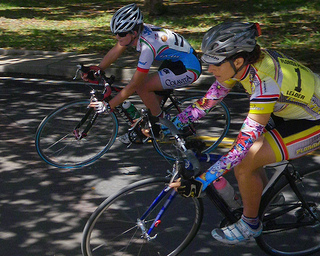 Critiques on science: exercise and women

One of my goals with working with the F-word is to have more people realise that science is not foolproof. To be a good feminist we have to understand that science also falls prey to gender paradigms and we need more women in science to notice the inconsistencies.

Which is why I want to point to this article which demonstrates one of ways researchers may not realise science can be incredibly gendered. I recently came across this article by the New York Times. Apparently, in 2008 they conducted a study on cyclists and the recovery rate when ingesting carbohydrates or carbohydrates with protein. They noticed a 4% increase in performance with athletes who consume protein after their intense workout.

What they didn’t explain in the 2008 paper was that the research was conducted only on male athletes but was generalised to ALL athletes. When women asked to be part of the study, the research team as an afterthought conducted the same experiment on female athletes. Their bodies did not perform the same way. Women showed no clear benefit from protein in their recovery period.

“Scientists know, of course, that women are not men. But they often rely on male subjects exclusively, particularly in the exercise-science realm, where, numerically, fewer female athletes exist to be studied. But when sports scientists recreate classic men-only experiments with distaff subjects, the women often react quite differently.”

If you’re interested in the details, it turns out that estrogen has a huge effect on metabolism and muscle health.

“What all of this emerging science means for women and the scientists who study (or ignore) them is not yet completely clear. “We need more research” into the differences between male and female athletes, Dr. Rowlands says.”

The picture above shows two professional women cyclists. Thanks dno1967b for the photo!