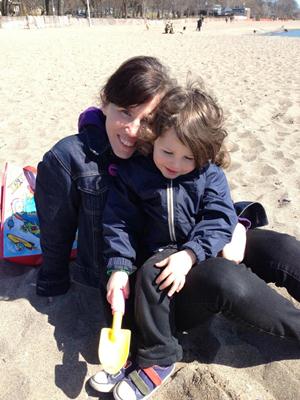 How becoming a mother made me a UK Feminist

This is a guest post by Lyndsay Kirkham. After years living around the world, Lyndsay currently resides in her home country of Canada, where she is raising her bi-cultural four-year old son. She writes about the intersections that surround feminism and motherhood over at ourfeministplayschool.

My feminism, at least my self-awareness in identifying as a feminist, began 14 years before I birthed my son. At 16, my feminism was very much a myopic and naive philosophy that only expanded into an understanding of multiple intersectionalities as I myself grew up. As a teenage feminist, I never could have predicted that I would find myself at 30 in the middle of Brussels, giving birth to a bi-cultured son and preparing to return to my home country of Canada.

Before having my son, I didn’t refer to myself as a “Canadian feminist,” but made efforts to consciously look, practise and consider beyond the geographical boundaries of the country where I was born. A feeling of panglobal feminism only increased as I began to spend extensive time in countries such as Italy, China and Belgium. I saw feminism not through the lens of any one nation, but as a philosophy and issue impacting all women – in different ways and degrees, dependent on the presence, or absence, of various factors and privileges. Most certainly, I was well-versed in Canadian feminist heroes and travelled the world with a tattered copy of Margaret Atwood’s The Handmaid’s Tale, but I hadn’t yet attached any sense of nationality to my feminism.

I didn’t anticipate motherhood, or how the oft-times disparaged work of mothering would heighten the intensity of my feminist practise, aligning me with feminists in the United Kingdom. I recognize that my feminism is not the feminism of women living in, or holding UK citizenship, and I don’t make attempts to appropriate those voices. However, in raising an English ally, the oppression of women living in, and identifying with, the United Kingdom is at the forefront of my theory, practice and passion.

In my commitment to understanding the struggles of my child’s fellow Britons, I have made connections with feminists, and feminist networks committed to UK focused activities in fighting oppression. Mothering an ally means informing myself about the realities that impact and shape the oppression of the women in my son’s culture. It also means celebrating the feminist heroes and women-stories that abound in contemporary and historical visions of the United Kingdom. It means being able to share with him the real struggles that have been, and are currently being fought by women living in the UK. It means investing in and teaching him about the intersections that play roles in the diverse groups of women that live in his second home. It means thinking deeply about and loving the women in his family who live in England.

It is easy to argue I’ve no place aligning myself with UK feminists, and it would be fair to question why anyone would bother compartmentalizing one’s feminism by geographical boundaries. The trick is ensuring that I avoid being a voyeur in UK feminism, or using my own voice to explain the oppression they experience or the history that they have lived. Instead of paving the road with my own interpretations of the experiences of women living in the UK, I must suggest to him the signposts for him to discover and connect with the women who share his culture and geography.

Being a feminist shouldn’t be about boundaries or borders, and it usually isn’t the case. But, we all have affinities. We all have connections. They shape our personalities, they influence our studies, they help us refine our passions. They come from many places, and stick with us for an indiscriminate amount of time. For some, it may be marriage, scholarship, employment or relationships that lead them to identify as a UK feminist. For me, it was the arrival of a newborn baby boy, a most surprising impetus, that has developed my focus in this specific area of a most global and intersecting fight.