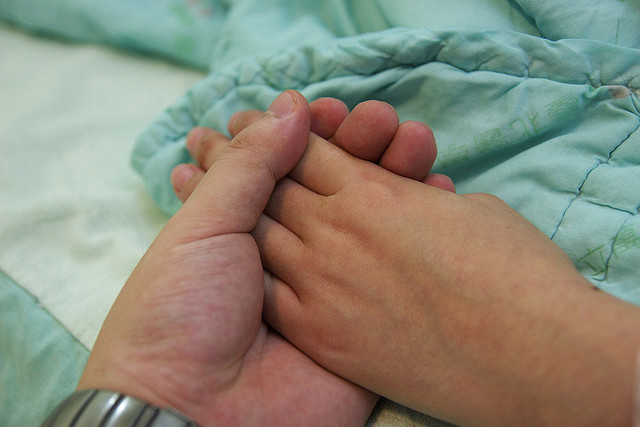 Chrissy D has a look at ITV1’s Home Delivery documentary and finds an exultant depiction of birth, despite the programme not going very far in its attempt to portray homebirth as anything other than something “other people” do.

I’ve never watched Call the Midwife, but I did YouTube One Born Every Minute a couple times after giving birth, just so I could have my own little private “I did that!” moment over and over again (I know, almost everyone else who has had a baby has done it too, I’m just about getting over myself), and feel thankful my partner never made any jokes or bored grunts during my labour. Seriously, some of those birth companions were almost impressively insensitive. But since everyone who’s anyone on the natural parenting circuit seemed excited about ITV1’s homebirth documentary, Home Delivery, I thought I ought to check it out to stay relevant.

The home vs hospital debate is one that seems to have been going forever, or at least since birth in hospitals was invented, but came onto my radar right after I gave birth to my son in January, 2011. More than just a benign discussion topic among birth professionals, it can be rather a polarising issue among those with a vaguely vested interest in birth choices.

Propping up the extremity of each side in the birth-advocacy-blogging arena in the US are The Feminist Breeder and Dr Amy, both proponents of safe, comfortable birth experiences for mothers and babies, each with a very different take on exactly what that should constitute.

Perhaps inevitably, the ITV documentary can’t help but portray homebirth as an option open mainly to a few renegades/middle-class hippies, but – more positively – the role of independent midwife is depicted as something possible, which could be pretty enlightening. It follows three couples with varying levels and qualities of birth experience as they prepare to deliver their latest babies at home, under the care of Virginia Howes.

Howes states, “…when birth has been taken out of the home and into hospitals… birth has become something that’s hidden away”.

While I don’t want to imply that 1BEM-esque programming is the key to yoinking birth back out into the open, or that those representations of birth are either realistic or helpful for the reputation of pregnancy and birth, I hope Home Delivery will go some way towards challenging the mainstream notion of the delivery room for some parents-to-be. In my ideal world, at least, birth not being hidden away would entail those in labour flocking to calm shores or inland lakes to peacefully and powerfully breathe their babies out, hair whoosing in the wind, serenaded by the braying of wild horses. Wild horses whose manes gleam in the wind while they eat redder than red berries off greener than green trees… I just realised I’m fantasising about Yellowstone National Park.

Indeed, it’s widely believed that the hospitalisation of the birth process can cause labouring mothers more pain (physical, emotional and psychological) than they need experience, though it seems insultingly easy for me to type this, living in a developed country where hospital intervention is possible, while mothers and infants in the wider world die in childbirth due to lack of medical care available.

To see a first-time mum giving birth at home in the documentary was an indignant surprise for me, since I was told, categorically (categorically) that I was not permitted to have a homebirth with my first baby. That was even way before anyone taking notes knew about my kooky medical history.

Home Delivery doesn’t go very far in its attempt to portray homebirth as anything other than something other people do, but it does raise the profile of independent midwives who are facing a tough time at the mercy of new legislation.

I’m wary that, as an advocate for the right to homebirth (but, for various reasons, clearly not advocationary enough to have planned one for the baby I’m now carrying), questioning the medicalisation of birth could come across as ungrateful to the efforts of those in the medical profession who work to ensure high risk pregnancies reach positive outcomes. Many people have positive birth experiences in hospital settings, without intervention, but as these don’t make news, interesting viewing or even impressive war tales around the lunch table. We tend not to hear about them.

The achievement of giving birth, by whatever means of delivery, is rarely truly celebrated. Home Delivery is certainly the most exultant depiction of birth I’ve ever seen on mainstream television, so it will perhaps, along with the pretty damn beautifully adorned re-release of Childbirth Without Fear, break the waters in the normalisation of positive birth tales, helping people to realise that a joyful birth, even a birth at home, is possible and desirable.

Chrissy D is the founder of Attachment Feminism (www.attachmentfeminism.com).

[Image description: Close up of the side-resting hand of a person in a bed with a green cover, being held by another person’s hand (palm-upwards). Tagged under ‘childbirth’, by yada2222 and shared under a creative commons licence.]