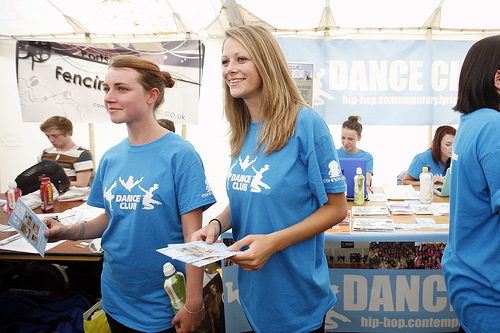 It’s one of those things that surrounds you so much that you almost stop noticing it, and even when you do notice, you shrug it off as something routine. Such is the nature of lad culture in higher education.

The recently released report by the National Union of Students (NUS), ‘That’s what she said’ (the title refers to the phrase commonly used for sexist TWSS jokes), delves deeper into the persistent and pervasive prevalence of lad culture on our campuses. Kelley Temple, NUS National Women’s Officer, wrote a feature on the report for The F-Word.

‘That’s what she said’ follows on from an earlier NUS report ‘Hidden Marks’ which found that “One in seven respondents had experienced a serious physical or sexual assault during their time as a student, 12% had been stalked while at university or college, and 68% had been a victim of one or more kinds of sexual harassment while they were at university.”

The findings resonate commonly among women students in the UK. A read through a new feature on the site by Beth Saward on her experience of freshers’ week, that “infamous rite of passage”, confirms how acceptable sexist behaviour and attitudes are in universities (as they are elsewhere, but perhaps more disconcertingly so in universities which are considered to be our seats of learning and are educating the next generation of world leaders).

“After attempting to out-drink the boys in our flat (having been crowned an honorary ‘lad’, an accolade I bear with mingled pride and disdain), we met up with some other guys. Suffice it to say that one of them took a more than keen interest and didn’t seem to realise I wasn’t returning his attention. After a very long night, I was left to wonder as to whether I’d deserved this harassment.

After sobering up, I quickly came to realise that what had happened was not usual freshers’ week behaviour. Or at least I hoped it wasn’t. When I came to talk to my flatmates about it, I was told that if I hadn’t been flirting with him, or let him into our flat, he wouldn’t have got the wrong impression. It wasn’t just my flatmates either. It was also the person appointed by the university to ensure that we were all feeling safe and happy within our accommodation.”

Unfortunately, this issue has been, so far, ignored by policy makers. NUS is trying to change this by involving stakeholders in the discussion on what needs to be done to tackle lad culture in universities. The start of this discussion was made at their recent National Conference where one of their fringes was a panel discussion on the topic.

I, along with the inspirational Lucy Holmes of the No More Page 3 campaign and Liam Burns, NUS President, were the panellists for the session chaired by Kelley Temple, NUS National Women’s Officer, and it was encouraging to see huge interest in the issue from both women and men at the conference.

The discussion highlighted how important it is to recognise behaviour that derides, denigrates and objectifies women as part of a wider misogynistic and sexist culture and to find spaces to say no to it and criticise it.

Lad culture is unacceptable and it’s time we stood up against it.