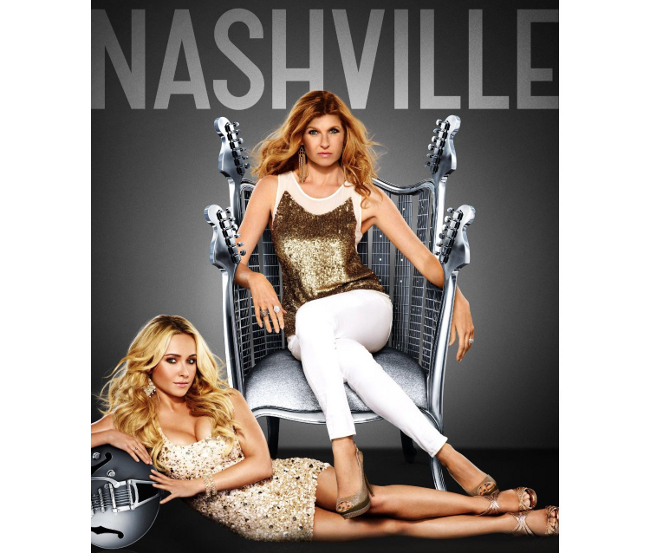 A country mile ahead

Nashville: you may have seen the word in TV schedules, accompanied by “big hair”, “country music” and Hadyn Pannettiere, and thought: “Absolutely not” – or, given how fast this new American import has disappeared from critics’ listings, “Huh? What is it?” Well, it’s not the celebrated Robert Altman film or a multilayered David Simon drama about urban corruption and multiply interconnected characters across social boundaries. But it’s far from the camp shoulder-pad ‘n’ hairspray ‘catfight’ suggested by write-ups that draw on sexist Southern stereotypes or describe it as “juicy and finger-licking good“.

But Nashville is, indeed, a little of all of those and something more besides. First off, it’s a big, razzle dazzle return to screen storytelling for Callie Khouri, the first woman to win an Oscar for Best Original Screenplay for Thelma and Louise. Like Parks and Recreation and Girls, it brings another US female showrunner to British TV screens and highlights – Heading Out, anyone? – just how far British TV has lagged behind.

All that is not to say Nashville is a feminist utopia. As Kelsey Wallace of Bitch‘s TV blog points out, there is a lack of ethnic and gendered diversity among characters and cast. And, in a sign this is a cable show, LGBT country fans (let alone country singers) clearly don’t exist on the programme. But when Wallace tells the show to “shove it!” for its insistence on traditional gender roles, the Madonna/whore dichotomy and the siren call of the so-called catfight, the show is arguably way ahead of her.

The first episode sets up expectations that the story will follow this traditional trajectory, introducing us to Rayna James (Connie Britton), a country club daughter turned country music legend who’s found her style and profile gazumped by poppy up-and-comer Juliette Barnes (Haydn Panettiere). Rayna is under pressure to counter falling sales and financial troubles at home by going on tour as a co-headliner with the brash Juliette, who, when not hiding from her drug-addict mother (Sylvia Jefferies), is trying to poach Deacon Claybourne (Charles Esten), Rayna’s old flame and long-term guitarist.

By episode five, things are exactly where you’d expect – Juliette has scored Deacon and had a Mommie Dearest-style showdown, Rayna is advertising beauty products but also writing for herself again – but they’ve got there by unexpected means. Okay, so the protagonists haven’t jumped in a classic Cadillac and sped South but you can’t help but hope they will. Now you’ve seen Rayna and Juliette penning and performing a song together, being professional despite their personal antipathies, you get the sense that’s where Khouri’s taking the audience. The success of this song, the wittily-titled ‘Wrong Girl’ with its shove-it message to waster guys, resurfaces the idea of the joint tour in episode eight. As Rayna says to Edgehill Republic label boss Marshall (Todd Truley), she’s “not saying no.” And nor am I: I want to go along for that ride.

While reviews and previews amp up the potential for face-offs and showdowns between the two women (because that’s apparently why we watch shows with female leads, to see them fight over a man, right?), what’s compelling about the show is that no earrings have yet been ripped out or nails bared. It’s sad but true that I also find it significant that no-one has yet been punched, stabbed or raped, making Nashville stand out from much TV drama.

This is mirrored by the triangle between Scarlett (Clare Bowen), a waitress at the legendary Bluebird Café, her punk-country frontman boyfriend Avery (Jonathan Jackson) to whom she’s devoted and almost-identical songwriter Gunnar (Sam Palladio), who uncovers Scarlett’s talent as a singer-songwriter. (Again, Kelsey Wallace nails it when she says the show suffers from “brown-haired scruffy handsome white guy” syndrome.) Gunnar’s “someone should tell you you’re amazingly talented” play for Scarlett in episode eight would be a heart-melter on a more conventional show, but Scarlett smacks him down for being presumptuous in thinking praise earns him smoochies. Music’s where her heart is.

But will they/won’t they is hardly the focus; refreshingly, the show makes no moral judgements about whether they do or don’t. Instead, it has a profound fascination with the uneasy blurring of professional collaboration and romantic intimacy in a genre known for its focus on love and relationships – the first song Scarlett and Gunnar record is called ‘Fade Into You’ – and what that means for women, given the double sexual standard. It probes the vexed questions that appear in discussions of women’s artistic practices across the board: how much of your work is autobiographical? Is that a good thing or a bad thing? Are you using your sexuality or being exploited for it? How much of the emotion conveyed is real and what does that mean?

Perhaps that’s the most feminist question of all.

Indeed, country music is known for its duality of extreme emotional sincerity (“Country music, the music of pain“) and rhinestone fakery: both are feminised in Western culture. So a show that celebrates both the heartfelt and the camp, particularly as strategies by which women performers succeed, is entering risky territory. Much more so than with the over-familiar and all-male subplots, involving Rayna’s father Lamarr (Powers Boothe) and her husband Teddy (Eric Close), about corrupt local politics and sub-prime property deals. Although Rayna’s teeth-clenched intervention into Teddy’s run when it’s derailed by revealing photographs, performing the ‘good wife’ for her daughters’ sake, brings the same questions of truth and lies (or rather grit, glitz and grey areas) to the political arena.

No emotional event passes them by: it’s all grist for the songwriting mill, not a prompt for passive despair

You don’t have to spend too much time willing this tortuous sub-plot into the background; by episode five, it’s clear it is just that: background to Rayna’s story. Her status as family breadwinner, her relationship to a changing media and her take on parenthood are the issues we care about. Like Barbara Kopple‘s compelling Dixie Chicks documentary, Shut Up and Sing, it shows women negotiating family and career and navigating questions about self-presentation that are both gendered and classed. Indeed, Juliette has some smart words to say about the contrast between Rayna’s privileged upbringing and hers; after all, she writes a song about her. It’s those class issues that give some charge to her involvement with dull, white-bread, true-love-waits baseball player Sean (Tilky Jones) against the wishes of his stuck-up mother (J.J. Rodgers). More importantly, her account of a childhood on the breadline, “eating dry pancake mix”, make her relationship with her fabulous new wealth and her mother Jolene (and her addictions) more complex than the phone-throwing scenes indicate.

Nashville is, first and foremost, a show about women performers, working hard to earn a living and develop their styles. At first, it’s a tad irritating that the female characters seem unable to write a song with a guy without falling for him. But slowly the show reverses that: perhaps they can’t fall for a guy without writing a song about him? No emotional event passes them by: it’s all grist for the songwriting mill, not a prompt for passive despair.

It’s hard not to hope that Rayna, Juliette and Scarlett may get a chance to share their very different talents with each other. Keeping them apart, the show sets a slow-burning desire to see them together. Other than Rayna’s exchanges with her pre-teen daughters (outstanding) and her sister Tandy (so far cast as her daddy’s pet), as well as Juliette’s brief, terse commands to her female PAs, there’s not much opportunity for Bechdel-positive dialogue.

In constantly delivering storytelling to the sound of varied female voices, Khouri creates the sense of a potential alliance, or at least conversation. I suspect that it may have somewhere more creative and generative to go than nose-first into the Grand Canyon. Or maybe it’s just that my unabashed love of a well-written classic country song – and gratitude for the awesome term “diva dip” – has me dreamin’.

Image description: Connie Britton sits cross-legged on a throne made out of silver guitars. She is wearing white trousers with a layered white and gold top and heels. Haydn Panettiere lies sideways on the floor at her feet, propped up by a guitar on her right side. She is wearing a textured crème dress (possibly jewel encrusted) and heels. Dark grey shaded background with the light grey Nashville logo in capital letters at the top. This is the current picture for the forthcoming dvd boxset on Amazon but the final picture is not yet confirmed.

Sophie Mayer is the author of The Cinema of Sally Potter: A Politics of Love, and of two poetry collections, Her Various Scalpels and The Private Parts of Girls. One of her current projects is Poems for Pussy Riot, with English PEN