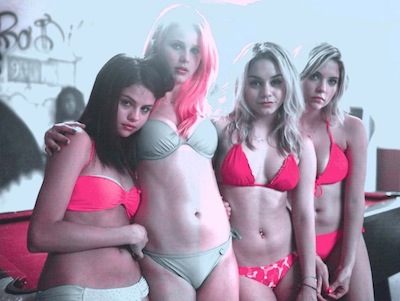 The latest offering from Harmony Korine, of notorious Kids (1995) fame, has already divided audiences, and along different lines. Having watched the film myself and having perversely enjoyed it, though not without reservations, I was torn between those of my friends (with a soft spot for Britney Spears perhaps) who loved it and the rest, appalled by the fact that I went to see this “trash” at all in the first place.

Spring Breakers features in abundance typical images associated with American college students’ spring feast of debauchery on the beaches of Florida, quite exotic to the British audience, peeking cautiously from the other side of the pond.

The images are “typical” not in a documentary sense though, but in media-airbrushed one: everybody is not only young (a given in this context) but also white, beautiful and slim. I am not sure about “sexy”, unless you find completely smashed young people sexy. They are also typically gendered, so the ratio of young women in bikinis to young men in swimming shorts is perhaps skewed, especially that four main characters are female. There is lots of bare breasts dangling and frenzied grinding too, so much so that it almost becomes no more than nauseating background noise, like in contemporary pop culture we are immersed in.

Numerous reviewers, male and female, self-identified feminist and not, find the film irredeemably misogynist, sexist and reinforcing rape culture. To support this view, Heather Long wrote in The Guardian:

“In another scene midway through the film, one of the girls is partying at what looks like a frat house. She is drinking even more than the guys and making sexual poses as the young men encircle her and urge her to ‘take it like a stripper’. She tells the men they can’t have her, at the same time she takes her top off.”

All true but… the men don’t have her in the end. And she doesn’t “take it like a stripper”, or anyone else for that matter. Nor do any of the remaining heroines. And this is why other reviewers think there is more to SB than the in-your-face objectification of a female body. Our new contributor Sarah Crawford writes about one of the turning points of the film:

“The surprise comes when you realise that they will not, literally or figuratively, lie down and submit to his prowess in a lustful daze. They want all the control that comes with his world and so they turn two loaded guns on him, thrusting the barrels into his mouth.”

Sarah credits Korine with questioning, rather than condoning, the status quo and signals how the audience’s expectations are played with during the film:

“‘I feel like something really bad is gonna happen,’ Faith pleas through her tears as she tries to persuade her accomplices to return home with her. This is how a great part of the audience feels, I imagine – anticipating the worst. The fact that you are waiting for something bad to happen to them speaks volumes, revealing predisposed attitudes towards gender, sex and power in the UK and North America where we’re constantly told that dressing provocatively, drinking and behaving recklessly will lead to an attack. Because these girls are about as wild as it’s possible to get, we assume they will be violently used and spat out. But that never happens.”

I will not recommend watching the film wholeheartedly as it will be torture if this kind of cinema is not your cup of tea. By all means, read Sarah’s review and comment.

The image is taken from the official Facebook page, with Selina Gomez, Rachel Korine, Vanessa Hudgens and Ashley Benson.