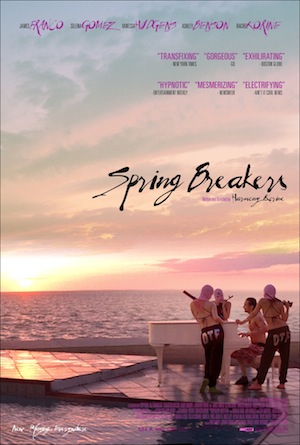 When spring break is over

The US tradition in which thousands of college students descend upon Florida beaches to revel in sun, sex and intoxication exists in the UK as a myth, one we learn about through glorified references in film and television. Spring break always involves hoards of young adults trying to become the wildest they can, but you wouldn’t expect things to get as out of control as those in Harmony Korine’s take on the phenomenon. In Spring Breakers the director focuses on the hedonism of four female protagonists. My fascination with these characters lies not in their unruly actions, which Korine neither directly celebrates nor condones, but in what lies behind the girls’ motives.

The only dialogue between the four friends revolves around spring break itself and how to get to the beach of their dreams. Faith (Selena Gomez) is the only character into which the audience gain a deeper insight; we know nothing about the other three except that they’re bored with their college lives and feel a need to let go, which suggests a rather unfulfilled, possibly empty, existence. Faith (indeed!), whose involvement with a Christian prayer group is highlighted, stands out as she seems less then enthused about some of her friends’ actions.

To fund their trip, three of the girls (minus Faith) carry out a successful robbery of a Chicken Shack, after which all four leave for Florida. In the heat of the spring break party, they are arrested for cocaine use and underage drinking and then find themselves bailed out by rapper Alien, a drugs and arms dealer played by James Franco. Faith leaves shortly after, overwhelmed by the heightened intensity of their new environment amongst Alien and his posse. Rather than guilt induced from her religion, it seems she is just scared, and so are we at this point.

After Alien guides the three girls into participating in some of his dirty work, circumstances take their toll on Cotty (Rachel Korine), leaving just Brit (Ashley Benson) and Candy (Vanessa Hudgens) by his side.

The desire to have fun, to be reckless without any responsibility, is made clear and is relatable for the most part. What’s wrong with wanting to party? However, as the film progresses, you begin to realise that the fun is far from harmless and that there lies a distinct drive within the girls to push things to the extreme in the name of spring break – the holy grail of indulgence.

Whether you consider the behaviour of Candy, Cotty, Brit and Faith as empowering or not, it’s implied from the start that they gain a sense of freedom, accomplishment and confidence through their rebellious actions. I would argue it’s like witnessing personifications of combined messages sent out by various channels of American culture: to be “hot”, sexually primed yet withholding, money hungry and open to objectification. In my opinion the film also explores a pressure to adopt masculine behaviours or qualities in order to be respected and taken seriously.

It’s not so much Alien that the young women desire, it’s his life and his lawlessness they’re salivating over

Franco gives an entertaining and impressive performance as Alien. His character seems to represent the pinnacle of power that most of these girls aspire to. The exhilaration felt by the girls after the chicken shop robbery is made clear as they re-enact the event to Faith. Alien has the money, drugs and criminal lure to keep Candy, Cotty and Brit not just interested but entranced. Masculinity exercised through criminal behaviour is sexualised to the highest degree and the use of phallic symbolism throughout could warrant an analysis in its own right. [Some reviewers draw attention to the racial dimension of the film. You can read The New Yorker’s Richard Brody’s piece on this subject – Ania]

It becomes unclear whether what began as a dangerous rush continues to be exciting and enjoyable for them or a mere survival mechanism after they encounter Alien. Will they adapt to their newfound situation or get eaten alive?

“I feel like something really bad is gonna happen,” Faith pleas through her tears as she tries to persuade her accomplices to return home with her. This is how a great part of the audience feels, I imagine – anticipating the worst. The fact that you are waiting for something bad to happen to them speaks volumes, revealing predisposed attitudes towards gender, sex and power in the UK and North America, where we’re constantly told that dressing provocatively, drinking and behaving recklessly will lead to an attack. Because these girls are about as wild as it’s possible to get, we assume they will be violently used and spat out. But that never happens.

The film has been criticised by Heather Long in The Guardian for reinforcing rape culture. I disagree: I think Korine wanted to subvert and challenge these grim expectations through the narrative. I believe the three of them use Alien in equal measure. There’s a scene back at his place that is incredibly effective in symbolising this change in control. “Look at all ‘ma shit,” he chimes again and again, while the girls writhe on the bed, admiring the extensive weapon, drug and money collections before gazing up at him in awe. It’s not so much Alien that the young women desire; it’s his life and his lawlessness they’re salivating over.

The surprise comes when you realise that they will not, literally or figuratively, lie down and submit to Alien’s prowess in a lustful daze. They want all the control that comes with his world and so they turn two loaded guns on him, thrusting the barrels into his mouth. Alien remarks, with apparent approval and an air of respect: “You’re my mother fuckin’ soulmates.” Fulfilling their power hungry fantasy of glamorised crime, they have become his fantasy.

Despite the film’s undeniable voyeuristic qualities (the heroines wear bikinis at all times, even in the courtroom), to write it off as sexist garbage would be too easy and redundant. It’s worth pointing out that when I saw it, a group of around ten young men left the cinema about two thirds of the way through. If frequent sexualised nudity was the main selling point, it couldn’t have been very successful in that respect. I don’t think you can accuse the director of only objectifying the female characters. It’s more likely he wanted to examine how a generation deal with the pressures American society inflicts upon them and, ultimately, their questionable aspirations. This is how young women are seen: in popular culture, by their peers, in porn and by the male characters in the film. I think it’s this modern fantasy that Korine wants to explore, not just a shallow, sexy bad girl bonanza.

Spring Breakers is dark, comically absurd and confusing. I see the film to be an exploration into the liberation, conscious desires and most significantly a need for control in young women. I found myself wanting to revel in the power and freedom seized by the girls whilst simultaneously despising their shallow motives and delusion. Are they really free at all? What is shown is a masculinised and hyper-eroticised version of female empowerment.

All images taken from the film’s official Facebook page.

Sarah Crawford has devoted her efforts to journalism since graduating from Bournemouth University’s Media School. As well as analysing film through a feminist lens, she focuses on various areas of pop/sub-culture. You can follow her on @Crawfster