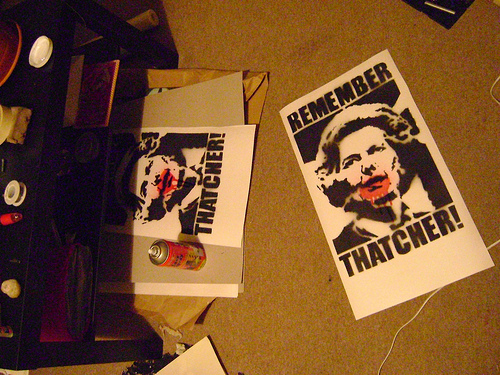 Thatcher: Through Their Eyes

Guest blogger Claire Rush compiles different quotes about the late Margaret Thatcher. They speak to the debate of whether Thatcher was a feminist icon.

‘Today, we in the House of Commons are here to pay our own tribute to an extraordinary leader and an extraordinary woman. What she achieved even before her three terms in office was remarkable. Those of us who grew up before Margaret Thatcher was even in Downing Street can sometimes fail to appreciate the thickness of the glass ceiling she broke through – from a grocer’s shop in Grantham to the highest office in the land. At a time when it was difficult for a woman to enter Parliament, almost inconceivable that one could lead the Conservative Party, and by her own reckoning virtually impossible that a woman could become prime minister, she did all three’ – British Prime Minister, David Cameron.

‘When you laud Thatcher as a feminist icon, you erase that experience. You uphold a racist, homophobic, classist woman who was probably one of the best examples of internalised misogyny to ever hit the halls of power in the UK, or as one of our members put it, ‘Holding Thatcher up as a feminist icon is like kicking intersectionality in the stomach’ – Hampshire Feminist Collective.

‘At each stage of her life she broke the mould – a woman at Oxford, when there was not a single woman at the university who held a full professorship, a woman chemist, when most people assumed scientists had to be men, a woman candidate for Parliament in 1950 when there was opposition from her local party in Dartford at the age of only 24, a woman MP in 1959 when just 4% of MPs in the whole of this House were women. The only woman in the Cabinet when she was appointed in 1970. Of course, the first woman prime minister …’ – UK Labour Leader, Ed Milliband.

‘Thinking of our 1st Lady of girl power, Margaret Thatcher, a grocer’s daughter who taught me anything is possible’ – Tweet from Geri Halliwell (soon deleted).

‘Thatcherism wreaked the most heinous, social, economic and spiritual damage upon this country” Everything I had been taught to regard as a vice – and I still regard them as vices – under Thatcherism was in fact a virtue… A woman (Thatcher) not on my terms’ – Glenda Jackson, Labour MP.

‘She stands as an example to our daughters that there is no glass ceiling that can’t be shattered’- US President, Barack Obama.

‘Barack Obama, interestingly, said in his statement that she had “broken the glass ceiling for other women”. Only in the sense that all the women beneath her were blinded by falling shards. She is an icon of individualism, not of feminism’ – Russell Brand.

‘Margaret Thatcher did great hurt to the Irish and British people during her time as British prime minister… Here in Ireland, her espousal of old draconian militaristic policies prolonged the war and caused great suffering’ – Sinn Fein President, Gerry Adams.

‘There is a whole generation of women politicians coming forward who owe their careers to Margaret Thatcher’s legacy’ – Author and former MP, Louise Mensch in the Wall Street Journal.

‘Tramp the dirt down… May she burn in the hellfires’ – Tweet by Respect MP, George Galloway.

‘Thatcher was certainly not a feminist either in principle or in practise. She is alleged to have said that feminism was “poison”. Far from seeing herself as a role model to female politicians, she actually promoted fewer female MPs than her male predecessors. She was the archetypal successful woman who revelled in being ‘one of the boys… Whatever you think of her political record, no one can deny Thatcher’s historic status. But no one can deny either that, despite her disavowal of feminism, her gender was an essential part of the myth of Thatcher’ – Labour MP, Diane Abbott in the Huffington Post.

‘When political policies are so brutally hard line, that they effect people’s entire existence at a pen stroke (whilst being told to pull themselves up by their boot straps), you can be sure that the spirit of dictatorship has arisen’ – Annie Lennox.

‘Few figures chan have had such a divisive effect on society. The ultimate Marmite politician, she ws either loved or hated… The financial crisis of 2008 was largely her doing’ – Former Canon at St Paul’s Cathedral, Giles Fraser.

‘It is right that today we give thanks for a life devoted to public service, acknowledging also the faith that inspired and sustained her’ – Archbishop of Canterbury, Justin Welby.

‘The real Thatcher legacy – the one that will last forever – has been the liberation of women from the shackles of male chauvinism… Today, the idea that a woman can lead a democracy is so common place that people assume it was an inevitable development of modern society rather than the result of the enormous courage and tenacity of one woman’ – Amada Foreman in the Daily Mail.

‘… Thatcher can’t really be seen as a “warrior in the sex war”, let alone as “the ultimate women’s libber.” Far from “smashing the glass ceiling”, she was the aberration, the one who got through and then pulled the ladder up right after her… Thatcher especially resented being defined by her gender. People should pay her the same respect of the doing the same after her death…’ – Hadley Freeman in The Guardian.

Whose tributes or comments resonant with you? What are your thoughts on Baroness Thatcher’s legacy?

The photo is of two spray painted posters of Margaret Thatcher in black. They have the words “Remember Thatcher”. Over her mouth is spray painted dripping red paint. Thanks R_SH for the photo.