Philippa rounds up the posts, articles and stories we couldn’t write about this week. From rape prosecutors to D. H. Lawrence to No More Page 3 to the inevitable Thatcher stories. 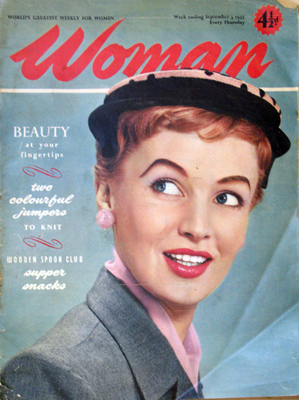 It’s the start of the week, so where better to start than with a round-up of the posts, comments and situations that we haven’t had the spoons, capacity, time or expertise to comment on here at the F-Word.

Please bear in mind that just because we link to something here doesn’t mean any or all of us agree with it, it could simply be that we found it interesting or thought-provoking. Also, we can’t guarantee that any of the places we link to are safe and without triggers, so do take care when you visit external sites.

If you have any stories or blog posts you want to promote or links that you think we’ve omitted, please let us know in the comments section below.

And to close, enjoy Yuja Wang playing Rimsky-Korsakoff’s Flight of the Bumble-Bee fiendishly quickly. Her hands are a blur!

[The image is a photograph of the front cover of Woman magazine from 1955. It is captioned “World’s greatest magazine for women” and cost 4 1/2D. It features a woman dressed in 1950s clothing and the headlines, “Beauty at your fingertips”, “Two colourful jumpers to knit” and “Wooden spoon club supper snacks”. It was made available by Vince Connare and is used under a Creative Commons Licence]