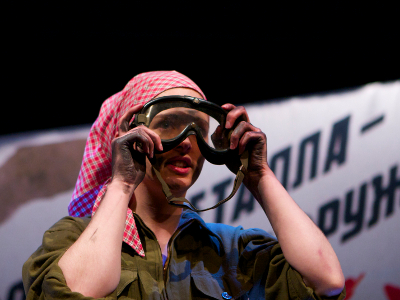 Set during World War Two in Stalinist Russia, White Rose tells the story of the Soviets’ Red Air Force and the women who broke with convention and penetrated this male-dominated world. The narrative centres around one of these women in particular, Lily Litvak, the “White Rose of Stalingrad” who became a combative legend in her own right. This is a neat and well-polished piece of theatre from Firebrand Theatre Company, with a cast who did justice to Peter Arnott’s play, which in fact debuted at the same venue during the 1985 Edinburgh Festival.

The historical roots of White Rose are fascinating. To think that three regiments of the Red Air Force were comprised entirely of women during WW2 is quite startling. In this sense, White Rose is an interesting snapshot of a unique place and time in history, during which women made their mark with vigour and passion that rivalled any of their male comrades. This context presents real opportunity for an exploration of gender roles in both the highly militarised and brutal setting of WW2 as well as an apparently classless communist society where despite being in the “same struggle” women are seen as having a crucial but different role to men. Indeed, at the beginning of the two hour play when we meet Lily we find that Alexsi refuses to let her fly as it would negatively affect the morale of the jumpy and superstitious male fighter pilots. Suffering a tirade from Lily and Ina, he eventually lets Lily fly – but only as his wingman on a trial basis. Despite her flying record and qualifications Lily has to prove herself as worthy of fulfilling a male role. However, the possible conflict that Lily could experience in her role as a woman in a man’s world is quickly displaced by her inhuman cold-hearted effectiveness. Lily is a mere teenager in this story but she seems almost as robotic as the engine that she flies in. 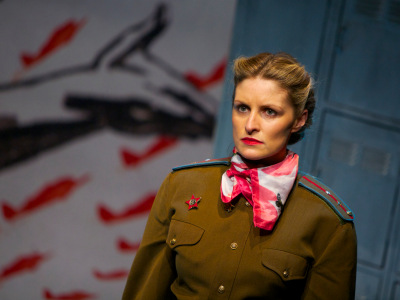 The portrayal of women inhabiting a man’s world is at the forefront of White Rose. However, it is dealt with in a flimsy and unsubtle way. The play never really digs behind Lily’s cold exterior to find out what her gendered experiences are like. Instead, most of the play is taken up by the love story between Lily and Alexsi, which like Lily is passionless and far too functional. With a play set in one of the bloodiest settings of WW2, the tepid love story seems a little weak. The horrors and brutality of the war are only alluded to briefly: Lily claiming that Alexsi needs female pilots in his squadron due to the high death rates, the fleeting tribute to Alexsi’s lost pilot comrade and the unpersuasive mentions of Lily’s Jewish grandfather. We would have liked White Rose to grapple with far bigger issues, like the pointless cruelty of war and the suffocating Soviet state as well as delve more fully into the experiences of women in the front line.

Nevertheless, this production of White Rose has an accomplished cast. Lesley Harcourt takes on the role of Lily with vigour and passion while Alison O’Donnell is fantastically pitiable as the out-shone, jealous and down-trodden Ina, Lily’s engineer. Robert Jack is also excellent as flight squadron leader, and later Lily’s lover, Alexsi – not missing a single facial tic, worried glance or pregnant pause. However, at times the use of almost exaggerated Scots accents and colloquialisms across the cast feels a little bemusing. We enjoy the Scots language and generally celebrate accent and dialect but in a piece set in Soviet Russia it becomes alien and out of place. In particular, some of the phrasing and delivery seems far too current to portray the authenticity of war time Russia.

The actors filled the space with elegance and creativity 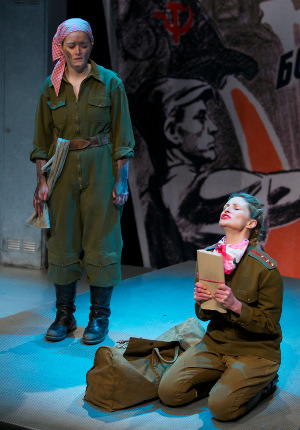 However, the staging in this production was a delight. The authentic Soviet poster backdrop and music and a simple set of military-style lockers framed each side of a small central stage but contained a myriad props and adaptations which allowed for an aircraft hangar to turn swiftly into bunking quarters and an office to turn into an outdoors game of chess and then a prison cell. Lighting, sound and video were combined fantastically to provide space for monologues, forays into the characters’ inner thoughts and action sequences being looked on from afar. The actors filled the space with elegance and creativity. One particularly memorable scene saw Jack, in an excellent sequence of physical theatre, make very clever use of the set’s three simple chairs to recreate the trenches, the firing lines and the ground combat in a way that was extremely energetic and engaging.

White Rose is theatrically attractive in its delivery but is somewhat disappointing in its story. This is a missed opportunity to remind us that even in the brutality of war, women struggle to escape being held back. The significance of gender could have been easily teased out of the unconvincing love story to provide a more well-rounded and satisfying piece of theatre.

White Rose showed at Traverse Theatre 13-16 March. Photos are by Graham Ridell and are used with permission.

Hazel Robertson is from the Scottish countryside but has been enjoying the bright lights, horizontal rain and boutique coffee shops of Edinburgh since 2005. By day she helps students at her former University and by night she consumes as many cultural titbits as she can get her paws on. Rowena McIntosh is a trainee social worker based in Edinburgh. She likes being profane, curry and a well made cup of tea, sometimes all at once. She also regularly engages in impromptu Twitter photo shoots with Beans the cat.