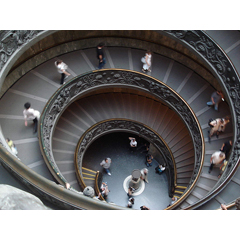 This week’s closing video is “Tourniquet”, from the album Departure and Farewell by Hem. There’s an interview with Jordan Bruner, who animated the video, at 1.4:

Image attribution and description: The image at the head of this post is called Spiral. It is from mag3737’s Flickr photostream and is used under a Creative Commons Attribution-NonCommercial-ShareAlike 2.0 Generic license.