From street to canvas 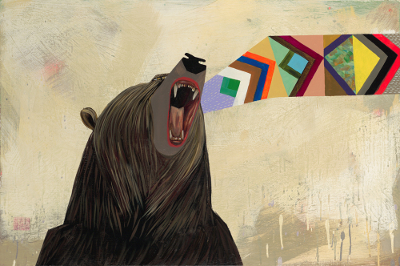 Arriving at Shoreditch’s Pure Evil Gallery on a sun-drenched Thursday evening, I was met with the buzz and lively chatter that marks the opening night of a long awaited show. As the Los Angeles based Deedee Cheriel’s work has enjoyed much trans-Atlantic praise, her first solo London show, Little Spirit and the Infinite Longing, has been the cause of much excitement. The hype is not misplaced.

What is most striking about the Little Spirit series is Cheriel’s innovative reconstruction of the human body. By topping somewhat crudely drawn human bodies with intricately and beautifully painted animal heads, Cheriel creates a troupe of sphinx-like creatures with the heads of tigers and beautiful sparrows. There are even reverse centaurs with luscious blonde manes. Inspired by the Pacific North West forests of Cheriel’s childhood, nature is present throughout the collection as a realm where the magical and the familiar live in apparent union.

Roaring bears wear make-up, thick trees with sparse leaves read untitled books, seahorses (half mermaid, half horse) commune under the sea, and text bubbles are filled not with words, but with Native American style geometric prints in transfixing colours. This delightful otherworldly space is not merely surreal escapism but a retreat to nature where possibility is infinite and we can live beyond the confines of society. .

While the faces of all creatures are beautifully and intricately constructed, the bodies appear hastily drawn, without attention to proportions or form, thrown in as if an afterthought. The effect is a provocative and fascinating disconnect between the head and the body; the ethereal realms of the spirit, mind and imagination are celebrated while the physical pales into insignificance. By replacing human heads with animal forms without gender signifiers, Cheriel removes gender binaries. We still make impulsive assumptions based on the clothing (those figures clad in dresses must be female), but our eagerness to jump to such conclusions only highlights and challenges our reductive notions of gender construction. 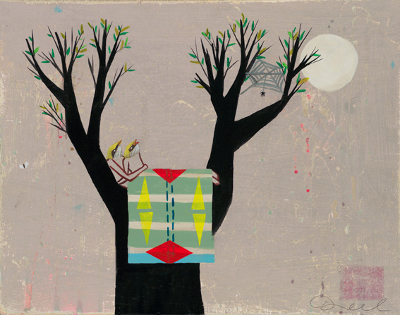 While her work refuses to acknowledge mainstream conceptions of gender, Cheriel is anxious that the omnipresent emphasis on the importance of gender wields an unfortunate influence on the artistic world. Chatting to me over a Peroni, she is eager to confirm that she considers herself a feminist. Cheriel is concerned that pressure for women to have children and the anxiety of child rearing have left many talented female creatives reluctant to pursue a career in the arts.

Sighing, she considers the lack of prominent female street artists, arguing that the public perceptions that an artistic lifestyle is incompatible with motherhood could not be more wrong.She reflects that the flexibility and free-spirited nature of an artist’s life makes it the perfect environment for women to pursue both motherhood and a dedicated career, likening the process of raising a child to creating art. Cheriel laments the marginalised position of women in the art world and hopes that if her art could enact one change on society, it would be to inspire more young women to create art and street art.

Cheriel has not forgotten her street art roots. Though her stay in the capital is fleeting, she has certainly left her stamp on the London landscape. In the two days prior to Little Spirit‘s opening night, two murals, inspired by pieces in her latest series, appeared on the street walls. Just a few doors down from the Pure Evil Gallery, a humble garage door has become a canvas to a striking depiction of a bird-headed woman in a conservative colonial-American dress, a tiger biting at her foot as if to restrain her, blood pooling beneath them.

Meanwhile, in the surrounding alleys and side streets, prints in the style of old Western wanted posters, depicting a roaring bear and the bold statement “you have everything you need” can be found pasted to walls and doorways. Playful yet poignant, the beauty of both Cheriel’s street and canvas art is that it contains a rare and buoyant sense of fun. Like her street art, every piece from her new series has a joyful feel of the subtly celebratory to it. Her colour palette is vivacious and her subject matter not without a touch of the whimsical; each piece is a real delight to behold. 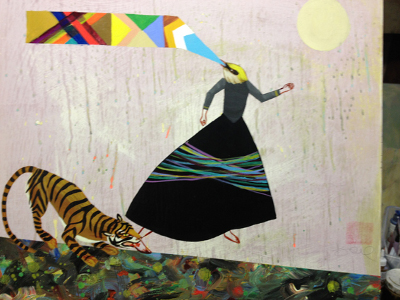 But ultimately, what makes Cheriel’s work so compulsively enjoyable is her emphasis on personal interpretation of her art. Apart from a handful of obvious signifiers, such as a lotus for fertility, she tries to avoid attaching symbolism in her work. Perhaps inspired by the importance of communal contributions in the world of street art, where anyone can alter a piece, Cheriel’s refusal to weigh her art down with concrete meaning and interpretation creates deliberate ambiguities that allow for real engagement between her art and its observers.

She is eager to grant fans from all philosophical and social backgrounds license to paint meaning on the works, giving each piece a fascinating sense of depth. Cheriel’s insistence that each piece is very much open to every viewer’s unique interpretation facilitates a liberatingly unpretentious, democratic and all-inclusive appreciation of her art. If Deedee Cheriel’s mission is to inspire is to inspire young female artists to make art, I am confident that she will succeed.

Deedee Cheriel’s Little Spirit and the Infinite Longing showed at Pure Evil from 18 April to 12 May. Cheriel’s street art can still be seen around the area, including one spectacular mural opposite the gallery: catch it quickly before it’s erased!

Lara Tutton is a literature graduate and freelance writer living in London. Follow her @larissa_faye