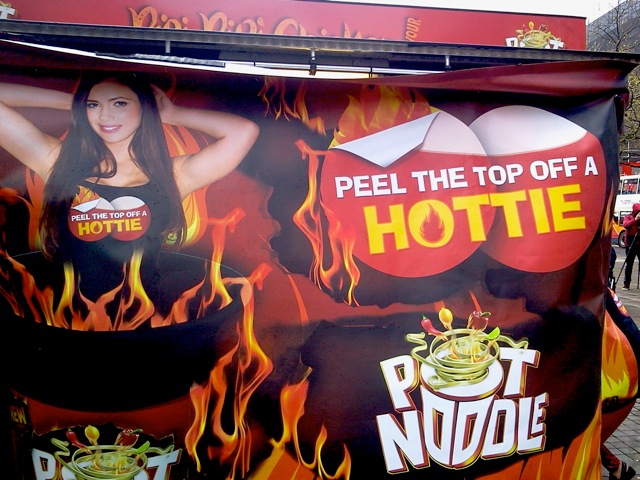 Not so hot: “Peel the top off a hottie” campaign by Pot Noodle

Breasts. Boobs. Knockers. Tits. If you happen to have a pair of fatty deposits attached to your chest, you’re probably aware of the fact that many people really like this particular kind of fatty tissue. So much so, they sometimes just can’t help themselves but stare at them, tell you to “get them out”, shove their hands under your top, or give them a good squeeze, because apparently that’s what they’re there for.

The marketers of Pot Noodle seem to have noticed this fascination with breasts and, because Pot Noodles aren’t already disgusting enough, decided to run a campaign that emphasises the status of female breasts as public property. The result is an advert that uses the image of two Pot Noodle pots, partially skin-coloured and placed next to each other to look like breasts in a low-cut top, alongside the slogan “Peel the top off a hottie”. The promotional stall they’re parading around the country makes the “pun” even more obvious by placing an image of a busty woman wearing a top with the Pot Noodle breasts on her breasts (Pot Noodle boob-ception!)

Using sexualised images to sell products is already irritating enough – but to be honest, I can just about live with images of scantily clad ladies randomly pasted into adverts to sell cars or electronic gadgets. The problem of this advert lies deeper, as this article by the editors of Vagenda explains: rather than simply using an image of an attractive woman, it actively encourages viewers to “peel the top off a hottie” – which can be easily translated into “pull the top off a woman”, an invitation to nothing other than sexual assault. Women are not only objectified and degraded to faceless “hotties” in the form of bodyless, floating breasts, but they (or rather, their breasts) are likened to Pot Noodle pots. Instant food in plastic pots – quite possibly the lowest of all commodities, there to be consumed and thrown away. Think about that for a minute. In a world where (sexual) violence against women is being described as a “pandemic”, we really don’t need a producer of instant food to pour even more petrol onto the fire, fuelling lad culture and the sexually aggressive behaviour towards women that comes with it.

Pot Noodle are obviously aware that their campaign is problematic, as they responded to several critical comments on their Facebook page, awkwardly stating that they’re just having a little fun. Other people’s reactions to criticism, however, were far less diplomatic, telling the posters to “shut up”, “get back into the kitchen”, or calling them “feminist fuck”. Pot Noodle did not bother to remove these rather vile comments from their page, but proudly declared in several posts that their promotional stalls now also feature some “male hotties” to cater for their female customers, which makes the campaign totally acceptable. Of course it does not, and the posters – including the Pot Noodle boobs – are still there, proudly telling all passers-bys, families and children, that pulling women’s tops off is totally cool.

I have submitted a complaint about this campaign to the Advertising Standards Authority, and I hope others will do the same. Given that there have been several successful complaints in recent times, including the “Pussy” drink advert which, well, used the word “pussy”, I am optimistic that the Pot Noodle campaign might come to an end soon. You can also email Pot Noodle directly to let them know what you think about this campaign.

Image is a photograph of a poster advertising Pot Noodles, as described in the article. Permission to use the photograph has been given by the photographer, @nomorehotties.