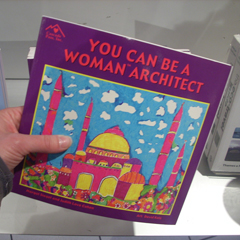 The blog so far has focused on challenging norms within architecture and I would like to propose that changes in architectural practice could lead to a more inclusive architecture both for professionals and inhabitants. It is important to consider the current state of affairs concerning gender awareness within architecture to find some clues as to where we can go from here.

It could be assumed that there should now be more be women in the profession, as there is equal access to training and job opportunities. Yet Greer asks us to consider the supposition that “it might be construed that women are to help carry the can full of the mess that men have made, it need not be surprising that women have not leapt at the chance.”1

Parallel to this, it is a common notion that the role of the architect is changing and Judi Farren Bradley writes that the architect is becoming invisible in society2, illustrated for example, through practices such as design and build contracts.3 By analysing the current position of women in the profession deficits in architectural education and practice can be noted thus allowing the introduction of new inclusive and sustainable possibilities.

One of the most important documents regarding the current statistics of women in architecture is the text “Why do women leave architecture?” Which was written by members of The School of Planning and Architecture at UWE (UK), partially funded by the RIBA and published in May 2003.4 This document questions why only 13% of the UK architecture workforce is female when they represent 38% of the UK architecture student population.5 UWE fully endorse assessing the architectural profession from a gender studies perspective adding that environments should be created where women can “thrive” within the profession. They also believe that this analysis and execution “will be beneficial to the profession as a whole.”6

Men and women’s differing skills and stimulants are rarely considered within the sphere of architecture. It has been proposed that certain working habits can best exaggerate women’s skills and pique their interests, thus allowing them to work to their full potential7 even though “the architecture profession believes itself to be in sex/gender terms ‘male’.”8

The current state of affairs

So, why are there so few women in architecture and what does this mean to the future of the architectural profession? In the paper “Why do women leave architecture?” the team analysed a questionnaire of 174 women who had either taken part in architectural training or practice and consequently left. Although some of the answers are expected some are deeply worrying and, I believe, potentially addressable with alternative teaching and working methods. Some of the results9 are as follows:

Not only the UK suffers from a disproportionate amount of women within the architecture profession. During an interview it was discovered that even though women in the Stuttgart architecture school actually represent a higher proportion of the student body the interviewee had noticed in a recent professional conference that she was one of 4/50 women present.10 This is backed up by the fact that the UWE questionnaire was responded to by women from as far away as Hong Kong and New Zealand; proving that this is not only a British but an international issue.11

While the UWE research paper makes recommendations of considerations to be made, by the RIBA (Royal Institute of British Architects), architecture schools and practices, it does not touch upon any specific conclusions or direction. It seems that research and theory is very good at raising awareness and asking questions but it rarely offers a way to move forward.

Through the teaching of gender studies within architecture schools and consideration in the workplace, through questioning modernist ‘common sense’ binaries and allowing vulnerability of the profession perhaps changes can arise when these theories are put into practice.

9 de Graft-Johnson, Ann, Manley, Sandra and Greed, Clara, ‘Why do Women leave Architecture?’ (Bristol: University of the West of England, unpublished research, 2003) p 3 (some recommendations have been omitted, check document for full list.)

Image attribution and description: The image at the head of this post is called you can be…. It was modified by Helen from an original photo by katherine of chicago under the Creative Commons Attribution-NonCommercial-ShareAlike 2.0 Generic license.