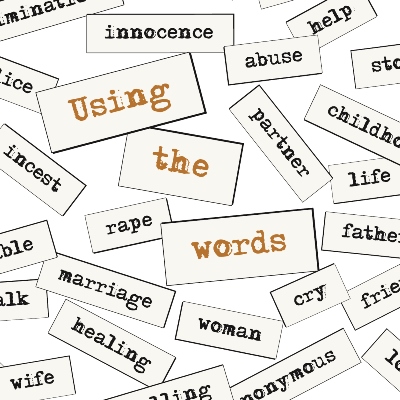 Annie Moran, who has previously written two features for The F-Word describing her experience of reporting rape, going to court and the aftermath, introduces a new project to help survivors speak out about sexual violence.

My best friend was asked in court “When did Annie first tell you she had been raped?”.

She couldn’t answer the question.

When I did start confronting it, it wasn’t what had happened that was holding me back. It was finding the words to describe it. The word rape seemed so loaded, so all encompassing, so scary that I never managed to say it.

And I am not alone in that.

I’ve come a long way through being raped, navigating the court system, arriving at feminist activism and reclaiming my life. I have discovered that not only are the words for what happened to me hard to find, but that people don’t know how to respond, how to even listen, to the words you do find. Rape jokes and throwaway comments are everywhere. But naming my experience and using the word rape causes people to flinch or look away.

In a world where each and every day new stories are breaking showing us how prevalent rape and abuse is, it’s time the world learnt how to listen to the people behind these stories.

Rape isn’t just something that is ‘out there’. The media would have us think it only happens in other countries, or in the 1970s. That it happens to other types of people, that they are weak people, that they are ‘victims’. But the media is wrong, it happens everywhere, all the time, to people who are like you, as well as people who aren’t. It happens to people you know. It might have happened to you.

That’s why, along with a couple of friends, I set up Using The Words. We wanted to reach out and understand how our experiences connect to others, and to try to find a language to name what was going on. Though for each person the words are different, we wanted to try and break some of the silence and stigma around discussing rape and abuse. A space where it is ok to use whatever words we need to describe what happened, and where strategies for survival are shared.

Rape Crisis estimate that one in five women will experience some form of sexual violence in her lifetime. This may have happened to you. You will know someone this has happened to, whether they are using the words or not.

That’s why we write, and why we would like others to write with us.

We invite you to read some of these stories, and to tell your own. You can find some guidelines for writing on our site.