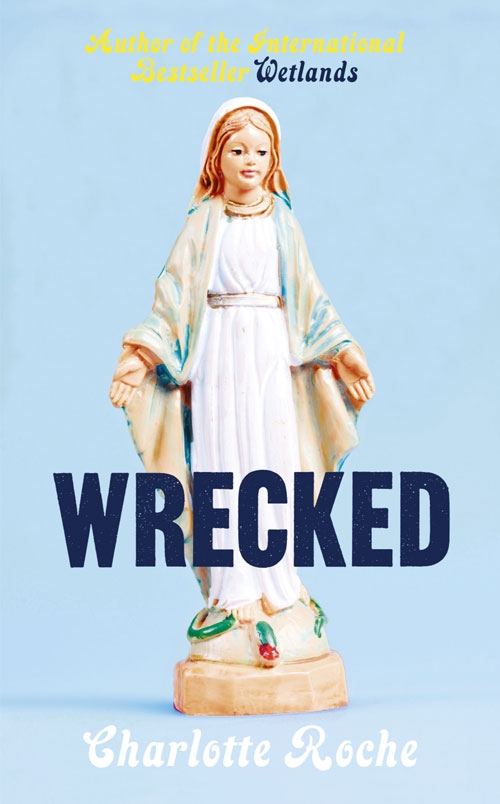 I remember well the media attention on Charlotte Roche’s debut novel Wetlands and the questioning over whether it could be seen as feminist. This talk – coupled with curiosity over whether it really was as explicit as the press had me believe – led me to pick it up. I was somewhat disappointed. The style of the writing (which I found self-indulgent and too descriptive), the main character… it didn’t fulfil the hype. But my curiosity about Roche – the themes she tackled, her message, the feminist debate – continued, meaning I wasn’t quite ready to disregard further offerings.

Born in England, Charlotte Roche has lived in Germany from an early age, pursuing a career as a television presenter with brief musical stints along the way. Wrecked is her literary return. Published in Germany in 2011, the translated edition hit Britain in April 2013 and has already begun to stir the same feminist attention as Wetlands. Visually, the cover has the same style as its predecessor – use of bright colour and minimal detail, with what the audience can assume is a statue of the Virgin Mary gracing the front. The beginning of the blurb (“It’s easier to give a blowjob than to make coffee”) sums up its tone and also made it something I was not so quick to produce in public reading spots. The blurb continues:

Elizabeth Kiehl is a twenty-first-century wife who goes to great efforts to please her husband in the bedroom. She is also an extremely thoughtful and committed mother. But her compartmentalized life is taking its toll and Elizabeth is heading for complete psychological collapse.

I expected the book to follow this descent into psychological disarray, which its structure also suggests. It compromises three chapters, “Tuesday”, “Wednesday” and “Thursday”, covering a three-day period in Elizabeth’s life. This expectation was not quite fulfilled. Elizabeth is instead presented as someone collapsed rather than in the process of collapsing. Initially she felt to me irrational, erratic and, I hate to say, unlikeable. For example, overly descriptive narratives are included of daily routines around basic events, such as having dinner. Her efforts at pleasing her husband are the primary driving force behind the book, or at least it appears that way to begin with, with the first fifteen or so pages devoted to describing a bout of afternoon sex.

By the end, my view of the main character progressed from “unlikeable” to “bearable” to “understandable”. This is something that the story did very well in my eyes, introducing focal concerns which seep out further and become increasingly complex as the story develops. Elizabeth’s relationship with her mother, for instance, is hinted at near the beginning, and at first might merely be written off as yet another turbulent mother-daughter relationship without any underlying substantive reason for such a rift. However, it emerges as the complicated outcome of very emotional events.

There has been feminist commentary on the original German title Schoßgebete, with “Schoß” being a poetic term for female genitals and “Schoßgebet” referring to a last-ditch prayer. Read into that what you will

Despite the sensitive themes (death, mental health, sexual monogamy), an element of humour is found among the pages (whether intentional or not). For instance, during a run to the bathroom after sex, there are some amusing deliberations over the use of a children’s toy. Or the character’s musings about a pornographic film director’s apparent thing for titles starting with the letter ‘W’ – which it seems Roche has too? Arguably this might perhaps be mere coincidence which emerged once the book was translated. There has been feminist commentary on the original German title Schoßgebete, with “Schoß” being a poetic term for female genitals and “Schoßgebet” referring to a last-ditch prayer. Read into that what you will.

Elizabeth as a doting mother and eager-to-please wife is perhaps what has led to some feminist backlash towards Roche. Alice Schwarzer, the founder and publisher of the German feminist journal EMMA, for example, has criticised Roche (link in German) for upholding a patriarchal view of sex, accusing her of using it as a marketing tool. By patriarchal view, we can assume she means that of a subservient wife, denying herself her own sexuality at the expense of her husband’s. Schwarzer notes the lack of sexual material in the book, despite this being a theme Roche claims to address. This is reason for Schwarzer to call it a “gimmick”, a marketing technique. She also suggests that the book portrays “desperate women” going to great lengths to keep a husband, referring, for example, to Elizabeth’s visit to a brothel with her husband despite suffering a digestive problem. This seems an oversimplification considering Elizabeth is initially relieved on realising she’s unwell and uses this to excuse herself from the impending visit. Schwarzer’s comments might be in part a response to Roche’s use of her within the novel itself, with the main character conjuring Schwarzer’s voice in her imagination, telling her she is imaging herself having vaginal orgasms “in order to subjugate yourself to your husband and his penis” – something Elizabeth denies.

While Schwarzer’s critique focuses on the negative connotations surrounding the female sexuality expressed in the novel, Roche’s attitudes towards female sexuality more generally has been considered in a more positive light

Initially I may have agreed with Schwarzer, but once I’d read the book in its entirety I did not feel it was as simple as this. Elizabeth, as a person, is very believable and complex: for example, she engages in threesomes during visits to brothels with her husband, yet feels uneasy at talking to her ex, because she knows he’s seen her naked and heard her come during sex. And while it felt at times Elizabeth was getting a rough deal in her marriage, some level of subservience is returned by the husband, and she has an ongoing plan for sexual freedom (read: to sleep with other men). While Schwarzer’s critique focuses on the negative connotations surrounding the female sexuality expressed in the novel, Roche’s attitudes towards female sexuality more generally has been considered in a more positive light (scan Roche’s Wikipedia page entry and at the bottom the “See also” directs you to “Sex-positive feminism”…). It is possible with the women’s standpoint pursued by the author in Wrecked – the story told from Elizabeth’s point of view, her candid description of female sexuality and the recognition of also female sexual power – that it could be viewed as promoting a sex-positive feminism.

So: a declaration of female sexuality or further reinforcement of patriarchal oppression? My mind’s still not made up and I’m curious as to what Roche delivers next. Wrecked tackles tough topics and can be an explicit read; and Roche may or may not be the feminist of the moment, but the book did leave me with one very clear impression: by the end, my initial dislike for Elizabeth had gone beyond a sense of understanding to an actual identification with her.

Image shows the cover of the novel, as described in the text. Used with the permission of the publisher.

Laura Way is a twenty something college lecturer who is completing PHD research on ageing punk women. She is also an out of practice bassist.