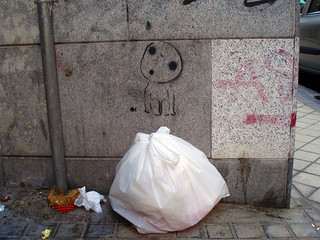 Who’s going to save the planet? Feminists, probably

I think we can all agree that, these days, the majority of people think the environment is an important concern, right? Whereas expressing worry about the environment once earned you the label ‘tree-hugging hippie’, these days it’s climate change deniers or folks with dirty great carbon footprints who risk social exclusion. Everyone recycles, at least a little, and most of us have got hip to the notion that charity shops are good places to find cool bargains, with the added bonus of not buying new quite so often. It’s getting to the point where being green is fashionable, even. So why should feminists pay particular attention?

Because the environment is a feminist issue. (The great Jess McCabe has written several pieces about this at the F Word – check out Why wind turbines are feminist, for starters.) I basically think that if anyone’s going to end up saving the planet, it will be feminists. I know… it already feels like we have to do everything, right? But stick with me.

We know the terrain

Feminists are perhaps the best-equipped people there are when it comes to understanding the Man vs Nature dichotomy. Ecofeminists have been saying since the 1980s that the domination of women (and oppressed groups generally) by men that occurs under patriarchy is no different to the domination of the natural world that’s also going on all around us. Women and other minority groups are all too often treated as objects, not subjects; patriarchy tells us what’s good for us in terms of our nutrition, appearance and behaviour when in fact what’s actually good for us is never the priority. We are valuable as generators of capital – consumers – but we are also there to be consumed. Our consent routinely goes unsought.

The same patriarchal mindset has allowed and still allows the powerful human beings (usually men) of this planet to commit heinous crimes against it. The planet is also an object, not a subject. Patriarchy’s way of doing things is considered superior (or you know, more efficient and therefore more profitable) to nature’s own, which is why we have genetically modified seed, factory farms and an almost total reliance on fossil fuels. The natural world is considered valuable when it delivers capital, but in order for this to happen it must also be consumed. The wellbeing of the creatures who live in it is routinely ignored. Feminists know exactly what this feels like.

Women generally suffer the most fallout from environmental destruction

For example, in places like rural Kenya – where climate change has resulted in severe droughts – women are traditionally charged with fetching water while the men take care of livestock. These women now have to walk unbelievable distances – often with their children – to fetch that water. Women will generally prioritise the wellbeing of their children before their own if they are struck by drought or poverty, too. When natural disasters strike, fatalities among women are generally higher than among men, which the London School of Economics links to their lack of rights. According to Oxfam, water related diseases kill over two million people a year, and most are women. Women are also still the primary care-givers when people get sick, and of course the number of sick people requiring care skyrockets in the wake of climate change or environmental disaster. Finally, women make up the majority of the world’s poor and are routinely employed as labourers in industries whose output damages the planet – often working for low pay and in poor conditions.

Women don’t have enough of a say

This is slowly changing, but women – and other minority groups – are still conspicuously absent at the world’s debating tables. This is true when it comes to the vast majority of issues, but the environment is definitely a big one. Because men dominate maths and science fields, we have fewer female biologists, chemists, climatologists and meteorologists. Women who take part in environmental campaigning are more likely to do so at a grassroots, local level, not on a national or governmental level – again, because politics is so dominated by men. In short, it can be no surprise to feminists that when it comes to the environmental problems that women are dealing with every single day, it’s men who are debating the ways we need to tackle them.

This is why, if you’re a proud feminist, you should also consider yourself an environmentalist. It’s a slowly-but-surely sort of deal, but the more rights women around the world are able to gain, the more we can do to protect ourselves from climate change, environmental disasters, the destruction of natural resources and all the other horrifying crap that’s still being done to the natural world in the name of progress. Encouraging more young women to study STEM subjects, providing more positive role models for girls – like the original Dora the Explorer – and raising awareness about environmental issues using our feminist networks… all this stuff adds a few more drops to the clear, blue, unpolluted ocean of positive environmental change.

Image shows a bag of rubbish, above which someone has spray-painted a picture of a Kodama, the tiny spirits representing a forest’s health that featured in the ecologically-focused anime film Mononoke Hime. Used under a Creative Commons licence, with thanks to Óscar Palmer.