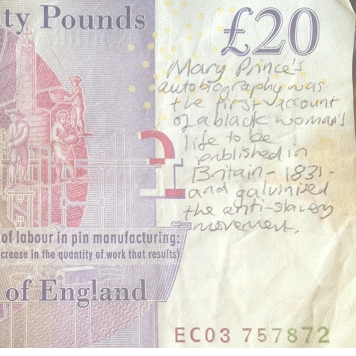 A biro and a tenner

Unless you have been on Mars, you’ll know that feminists have been putting immense pressure on the Bank of England to reverse its plans to redesign the five pound note. The new fiver is set to replace the image of the reformer Elizabeth Fry with Winston Churchill, and after that happens then England’s paper currency will only highlight the contributions of men, not women.

(Although Mary Slessor appears on one version of the Scottish fiver.)

There have been efforts to raise money for a law suit that will challenge this decision in the courts. There have been protests, with people dressing up as possible candidates for notoriety. All sorts.

But the latest idea is my favourite: a bright spark on Tumblr has come up with the idea of writing women back onto the currency ourselves. Take out a biro, grab a note, and write the name of a woman who has contributed to the nation’s history.

Now, as the Tumblr mentions in its disclaimer, it is technically illegal to write on bank notes. However, people do this all the time – including bank clerks. Still, please bear that in mind and also that I’m not encouraging you to break the law. Etc.

But. Here’s what I like about the Protest Penny. It doesn’t just highlight one woman. Or two women. Through crowd-sourcing this, in theory we could write on our currency the achievements and significance of as many women as we want.

Coronating just one woman by placing her face on a banknote is all very well; but it is inherently problematic. Such an endeavour might have been made more problematic, not less, by the recent campaign to keep a woman on the fiver.

Beforehand, I suspect few people thought about this issue much. Now, the absence or presence of a woman on our banknotes has become symbolic of the visibility of women in English and British society. So the choice of woman has a weight it never did before.

This is why the choice of Jane Austen as the possible next face-of-the-tenner has been so controversial. She has become known, via the period drama, as a particularly unthreatening example of the successful and significant woman. Even Mervyn King said she was “quietly waiting in the wings” for inclusion, adding to the suggestion of her as a demure token. (Unfairly. It’s probably true that this is why she has been chosen by such a conservative institution as the Bank, but this depiction of Austen doesn’t bear much relation to reality, however many bonnets have been sold in gift shops.)

Which woman gets to represent the historic contributions of half the population? Is it a white woman? An aristocrat? A heterosexual woman? A cis woman? Choosing a figurehead is fraught, and I doubt that the Bank of England, which doesn’t mind eradicating women completely from bank notes, has the chops to address these questions of which women are visible, and which women are invisible. These are questions that even the feminist movement is still grappling with inadequately, as we all know.

That is why, even though the ultimate goal of Protest Penny is obviously linked with the fiver issue, I think it has a bigger life of its own. So if you do choose to flout the law and pick up a biro, then why not look through the Penny Protest Tumblr and try and highlight a woman who’s not yet appeared. One of the many, not the few.