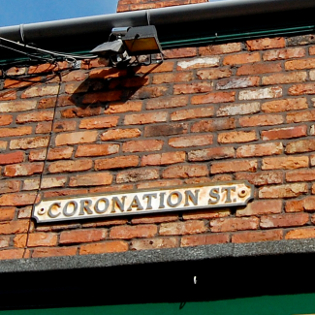 The menace of Karl Munro

I initially started to think about Coronation Street from a feminist perspective in January of this year because I was impressed by the soap’s willingness to address the issue of women’s control over their bodies, such as when Kylie Platt (Paula Lane) openly stated “my body, my decision” in response to pressure from her husband, David (Jack P. Shepherd), not to end her pregnancy.

Along with this, Wikipedia includes a description of Coronation Street as a “matriarchal soap” that is “known for its portrayal of strong female characters”, drawing on the well-worn examples of Hilda Ogden, Elsie Tanner and Annie Walker.

Stella Price (Michelle Collins) most definitely qualifies as an assertive and well respected figure in the soap, following in the footsteps of Walker and a long line of formidable women as the landlady of the Rovers Return. However, despite her initial show of feminism – throwing out her cheating partner Karl (John Michie) and ignoring the street’s gossipers when dating the much younger Jason (Ryan Thomas) – Stella has recently been seen increasingly under the control of Karl, who she has unfortunately taken back.

Sadly, this particular form of threatening behaviour is probably being realistically portrayed

Karl Munro has been portrayed as a stereotypical nasty-piece-of-work bad guy from early in his Coronation Street life: stealing, gambling Stella’s money and lying to her, although it was only the revelation of his affair with married bar worker Sunita Alahan (Shobna Gulati) which eventually led Stella to ask him to leave. Karl has never been a nice man but he wasn’t a frightening one in the beginning of his current storyline. Though not happy about being thrown out by Stella, he leaves willingly and begins the same pattern of dependence with his lover Sunita (now separated from husband Dev (Jimmi Harkishin), conning her out of money and lying about his source of income. It is perhaps this need to be cared for that has kept some viewers at an emotional distance from him, due to him coming across as pathetic, according to traditional expectations, rather than dangerous. However, more recently, this has changed.

The descent begins in early March when Karl is still separated from Stella but wants a reconciliation (unknown to his new partner Sunita). Increasingly frustrated by not having his way, he behaves in a threatening manner towards Stella in the pub after hours, grabbing her by the arm when she refuses his advances. This scene is genuinely frightening, as it seems entirely possible that Karl, a man Stella had trusted and who was practically a member of her family and living with her and her daughter, could now assault her. Sadly, this particular form of threatening behaviour is probably being realistically portrayed, as it is well-known that a high proportion of women who are raped or assaulted know their attackers.

Stella tells Karl to back off and is seen exiting, looking upset and shaken. However, this doesn’t stop Karl, who later goes on to kidnap her in the taxi he is working from. Although obviously wary, Stella handles the situation with calm strength, explaining to Karl that she can’t trust him anymore and has moved on to a new relationship with Jason. Karl appears to accept this and drives her home, apparently with an understanding that the relationship really is now over.

These two acts of invoking fear, just days apart, are a clear warning sign that Karl is capable of more than was first apparent. In keeping with this, he does not take Stella’s advice to move on and instead executes a plan to burn her pub to the ground. In doing so, he removes Stella’s source of income (and, thus, independence), simultaneously ruining her relationship with Jason by rigging the fire to make it initially seem like it could be the result of poor electrical work by the young builder. To top it all off, this fire gravely injures Sunita (after she catches Karl in the act), traps Stella (who Karl subsequently ‘saves’) and kills the firefighter, Toni, who goes in to save Sunita.

Karl has arguably appeared as a man driven by desperation but he still has yet to admit his guilt out loud. Indeed, until his relatively recent flashes of compassion for Sunita’s estranged husband Dev (who he has, for the record, also considered killing), Karl’s frequent silent looks of fear have seemed to primarily relate to his worry that he will be found out. These moments are always followed by swift action on Karl’s part to make sure he isn’t caught, with any regret over the harm caused to Sunita, Toni and Stella seeming to pale in comparison. It should also be noted that Sunita comes out of her coma and is close to surviving the fire, but dies very shortly after a visit to her room by Karl, with the strong suggestion (although this is not seen on screen) that Karl has removed her breathing tube in the hospital. Along with this, we see Karl planting the keys to the pub in Sunita’s hospital possessions and successfully convincing the police that she was behind the event.

I would find any theory of the manipulative and calculating Karl as a man forced into his actions by love and desperation extremely hard to get behind. The fire has solved so many of his problems – ridding him of the woman he blames entirely for the breaking up of his and Stella’s relationship and providing him with an opportunity to play the hero and rescue Stella from a burning building. This seems an all-too-neat conclusion from his point of view.

In turn, the new hero status Karl has managed to create from the tragedy of the fire has directly impacted on Stella rekindling their romantic relationship. That forgiveness is forever possible – not to mention on the basis of deception – is a worrying statement for Coronation Street to make. After all, Karl has had plenty of second chances: this is a man who previously staged a robbery on the pub in which he lived and worked, which is owned by the woman he claims to love, just to cover gambling debts.

A gender inequality in terms of forgiveness can also be found when we compare the overwhelming misdeeds of Karl to the reactions to minor indiscretions of female characters. For example, after kissing a boy who wasn’t her boyfriend, Katy has had to leave her home, been called a terrible mother, specifically told she cannot be trusted and repeatedly shouted at in the street. Katy did not physically harm anyone but she’s arguably had it much tougher than Karl ever did for his cheating.

Significantly, several months into the storyline, not only has Karl Munro not had to face much (if any) justice for his actions against Stella and her livelihood, but he has also refused to take any semblance of responsibility for his affair with Sunita Alahan. In a scene shortly before her death, Karl violently pins Sunita to the counter of her husband’s shop and openly states that their affair was all her fault. According to Karl, losing his job and his partner – which, of course, he regains soon enough – is not down to any of his own actions.

Since the fire in the Rovers, this attitude has been conveyed by others and Sunita has now also been blamed not just for the loss of the local pub but for things which can barely be traced back to her at all. For example, Gloria, Stella’s mother, even recently tried to pin the local builder Owen’s loss of trade on Sunita; her logic was that if Sunita hadn’t (as she mistakenly believes) burnt the pub down Owen would never have passed up on other building jobs to take on the Rovers (which, at the time, had an insurance problem that was stopping work from taking place). Sunita has committed one indiscretion that her peers view as immoral – her affair with Karl – and suddenly her life outside of the relationship, as a mother and respected member of her community, means nothing. Meanwhile, Karl is now a hero on the street.

Seeing a man (albeit a fictional character) so readily able to push the boundaries of his relationships in this way – never mind that he is undoubtedly going beyond the limits of the law and has now killed people as well – is a chilling thing to see on prime time TV. Most chilling of all is that the storyline, while obviously heavily dramatised, nonetheless seems to reflect the very real and core problem of a patriarchal society that romanticises heroism. This could indeed make it easier for a man to begin or restart a relationship under false pretences.

I can only hope Stella will eventually stand up to Karl when she does find out about the extent of his violence and lies. I also hope she comes out on top, unlike Sunita who lost out and paid with her life.

Gemma is a student in Scotland, about to start an MLitt in Modern Literature. Her first love is work of Dorothy Richardson. When not reading enormous novels she likes cycling and soaps. She blogs at Feminist Coronation Street