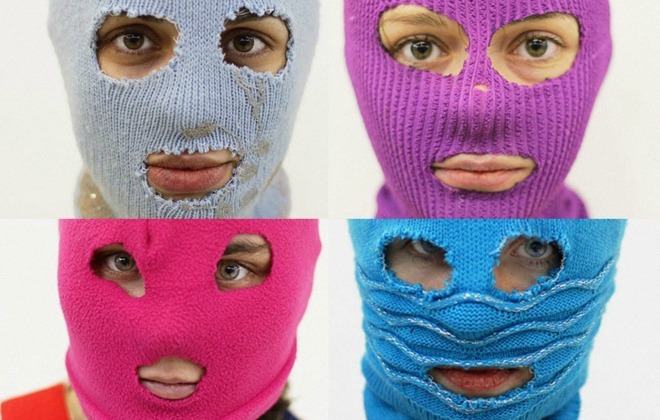 Last year, many were holding their breaths, watching the trial of three members of the group. In March 2012, Nadezhda Tolokonnikova, Maria Alyokhina and Yekaterina Samutsevich were arrested in the aftermath of their site-specific performance ‘Mother of God, Drive Putin Away’ in the Moscow Cathedral of Christ the Saviour.

The verdict in the process, which to those unfamiliar with the Russian context seemed absurd or elicited comparisons with Stalin’s notorious show trials from the 1930s, was issued on 17 August 2012. All three got convicted on the basis of “hooliganism motivated by religious hatred” and sentenced to two years in prison. After the appeal in October, Katia was released on probation while Nadia and Masha remain imprisoned in penal colonies in the east of Russia. If you want to show your support, you can send a letter to Nadia and Masha.

Inspired by the collective’s performance on Moscow’s Red Square in January 2012, filmmakers Maxim Pozdorovkin and Mike Lerner flew to Russia shortly after the arrest and spent six months there, working on a documentary Pussy Riot: A Punk Prayer that opens in UK cinemas on 5 July.

“We were following them from March to October and then rushed back to America to get the film cut for Sundance, so it was a rushed job,” Mike Lerner told me in an interview I was lucky to get with the directors after the film’s UK premiere at Sheffield Doc/Fest on 12 June. Time pressure did not affect the quality of the film in the least, which you should find out yourself if it is showing in a cinema near you.