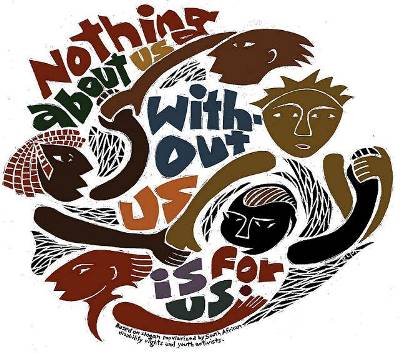 We were recently contacted by Edge Fund, who are looking for people to join their Advisory Group to help them make funding decisions. Read on to find out more about their work and values…

“We think that it is crucial that as refugee women we are able to speak for ourselves – one of our mottos is ‘Nothing about us without us’. Too often, charities and researchers claim to speak ‘on behalf’ of asylum-seeking and refugee women, and are able to attract grant money in doing so, with little input from these women”.

Group run by and for refugee women

This is a story we hear all too often in the applications that arrive in our inbox: people who have had enough of others speaking for them and making decisions about their lives. Of course, this happens to all of us in many situations, particularly relating to government and places of work, but in the charity world it is seldom challenged.

Generally charities are seen as doing good for society, and many of them do. So it can be hard to look critically at them. But it’s our sense that many have become large organisations distanced from the communities they aim to help and run by professional people who come from very different backgrounds from those communities. This is most obvious with large international charities that often have head quarters in the North, directing the work in the Global South, but applies to many smaller organisations too. Charities often take power away from communities as they impose projects upon them in the name of doing good. Funding bodies often replicate this model, again with decision-makers who are unrepresentative and unanswerable to the communities their decisions affect.

People have the right to make decisions about their own lives, and they’re more likely to come up with solutions that are effective and appropriate for them. No matter how educated on a subject a person is, or how well meaning they are – it doesn’t give them the right to have power over others, and especially those less privileged than themselves. That’s not to say that there isn’t a role for people to help others, we can all be powerful allies, but there’s a big difference between leading and supporting.

We need a new way of organising society where everyone can be in control of their own lives and communities and where we all have an equal say. This needs to apply to every corner of society, including grant-making. That’s why we focus our funding on two types of groups; self-organised groups speaking on their own behalves and political groups taking action against the systems of power that affect us all. And that’s why we’re asking people to join our Advisory Group – so we can make sure that the people with the biggest say about applications affecting disabled people are disabled people, and the same for other communities, whether based on race, class, sexuality, gender, immigration status or other grounds. To make it work we need people to get involved, please get in touch.

“We want to do things the way we think they need to be done, not how ‘experts’ and certain philanthropists and funding organisations think they should be done”.

Group run by and for disabled people.

The image features the words “Nothing about us without us is for us”, intertwined with five people of colour holding hands. Small writing underneath reads “Based on slogan popularised by South African disability rights and youth activists”.