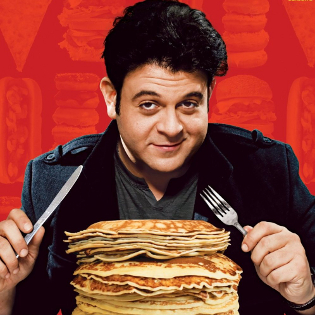 Amy Calvert finds plenty of macho propaganda and some unfortunate portrayals of women when she examines a reality television series following a man’s attempts to conquer super-sized food challenges.

Man v. Food is a US reality television series presented by Adam Richman, a bit-part actor from Brooklyn, New York. The show ended after three series’ on Travel Channel, but for those feeling curious, repeats of the show are easily accessible on Dave, the self-professed “home of witty comedy banter”.

Man v. Food is the quintessential embodiment of this supposed ‘banter’; an elusive word I find impossible to say without dwelling upon its somewhat problematic ties to the justification of sexism. (If you can bear to recall the slimy and repulsive UniLad rape jokes, shielded by the bloke-ish arms of ‘banter’, you’ll know what I mean). Man v. Food has caused mixed reactions amongst critics, from scathing looks and tummy-turning nausea to ‘manly’ expressions of approval, admiration and infatuation directed towards Richman, a now legendary ‘real man’ because of his gastric prowess.

The programme follows a relatively simple structure, following Richman as he travels from one state to another, gorging himself on meal after meal, with obvious bias towards fatty, calorific and meaty dishes. The average episode of Man v. Food generally incorporates four key elements. Richman begins by sampling a local delicacy or speciality, expressing his appreciation through grunts and groans of apparently primitive satisfaction, a token dribble of sauce often smudged across his chin. He then observes the creation of a super-sized food challenge, which he will attempt to conquer in the third part of the programme.

The show ends with a pseudo press conference setup, with Richman playing the role of A-list celebrity and answering questions put to him by an adoring audience of devoted fans that have watched him either succeed or fail in the aforementioned challenge. Richman often dons a pair of aviator sunglasses for this final part of the programme, presumably in an attempt to bolster his ‘manly’ reputation…

Trimmed cover of the Man v. Food Season 2 DVD. This shows a head and shoulders shot of a slightly smiling Adam Richman, with a raised knife and fork in his hands, about to tuck into a pile of pancakes on a plate. This is against a red background, subtly overlaid with faded pictures of fast food items, such as burgers in buns and hotdogs.