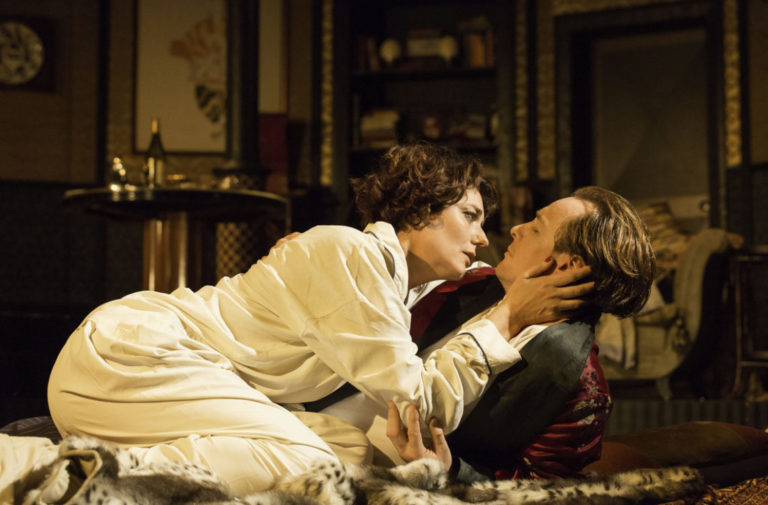 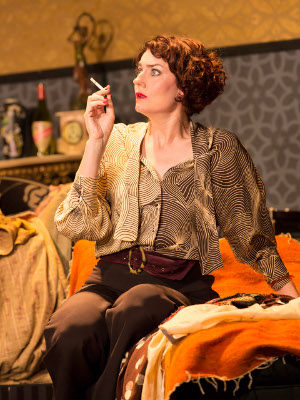 Private Lives is a play of contrasts: old versus new, chaos versus calm and, at times, simply the choice between level-headedness and hedonistic, reckless abandon. This story of a couple divorced five years ago, meeting by chance with their brand-new spouses on adjoining balconies of a hotel in Deauville, has been revived countless times, and yet there’s something that draws artists and audiences alike to this tale of two people so bad for each other that it quite probably makes them the only people who can stand each other. You wouldn’t want to be the sympathetic friend listening to the aftermath of their rows.

It’s also a play you can know too well, with glib one-liners that pepper a louche and sparkling dialogue. No enviable task then, for the four actors who have to revive and refresh it each time, but here we are at the Gielgud and it’s curtain up once more.

Enter Anna Chancellor’s Amanda, a commanding and graceful presence whose comic expressions tickle the audience throughout the theatre, and Toby Stephens’ Elyot, taking what could be the sort of man London would elect Mayor and making him both world-weary and a likeable sort of hysteric instead. Their sexual chemistry is the glue that holds the play’s pieces together. Neither is ever asked to apologise for it or rein it in, a refreshing and very effective way to play the relationship.

Divorce rates are vastly higher now than when this play first came to life in 1930, so perhaps the formation of new couples from old and the spectre of failed marriages past is less exotic for the audience, but the hearty laughter suggested the theme still strikes home. Nor is this production lacking in glamour. What with the velvet evening gowns, silk pyjamas and stylish headwear, you’ll find your fingers itching to hold a cigarette while you make witty bon mots in the bar at the interval, despite the fact that you’ve never smoked and that sort of thing hasn’t been legal indoors for years.

A cautionary tale perhaps, to those men who value mystery over actually understanding and getting to know their spouses

The play’s central conflict becomes plain in the comparison by the nervous new wife of herself against the famous Amanda. It’s not just that Sibyl is a “completely feminine little creature”, making Amanda the “half-masculine wom[a]n banging about” by default. Nor is it the shadow of a “despised” ex-wife who divorced a man for cruelty and infidelity set against the meeker, more polite new wife who promises a life of almost boring contentment. No, in a far wittier way, we find that the problem is one Sex and the City has immortalised: He’s Just Not That Into You.

Sibyl (played nimbly by Anna-Louise Plowman, also Stephens’ off-stage wife) might have been written as a stooge of sorts, but in this rounded and sweet interpretation it truly becomes a choice for Elyot. Only he isn’t actually capable of making that choice, because Sibyl will always lose by virtue of not being Amanda.

Anthony Calf turns in a delightfully blustering performance as Victor, the apparently good egg who can’t understand the woman he’s married. A cautionary tale perhaps, to those men who value mystery over actually understanding and getting to know their spouses. His lesson of taking a woman from her pedestal and trying to make her conform to some traditional idea of a woman and a wife is a hard-learned one.

Usually the mere suggestion of domestic violence will set my teeth on edge, and indeed the sinister implication of it left me shaking after the RSC’s production of The Taming of the Shrew a few years back. The incidents in this production, though, feel more playground spat than the unspoken blight of too many relationships. But after a moment, listening to the hearty laughter over lines like “women should be struck regularly, like a gong”, or observing the clawing, slapping ferocity of a physical fight, you realise this isn’t so very far removed. As is too often the case, the veneer of social status almost obscures the danger of a relationship this volatile: getting hurt is not only an emotional risk for these two.

Amanda and Elyot are most compelling when gender roles are inverted, or firmly wedged in a sort of androgyny where both can be equally wonderful and equally awful 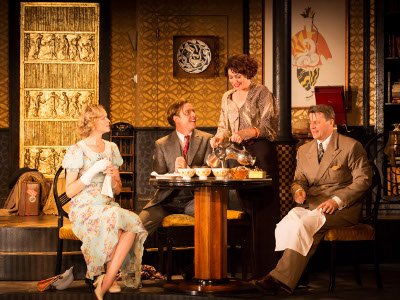 The casting does wonders for the physical comedy required. Stephens has a confident stride around the stage, unafraid to swoon and talk with his hands in a way that might usually be reserved for a female character. Chancellor, a full head taller, is at times far more aggressive in her body language, never more so than in the hilarious dance that Amanda improvises to Stravinsky’s ‘The Rite of Spring’. It’s a choppy and unfettered series of movements, owing its component parts more to badly interpreted martial arts than anything you might see from the Royal Ballet.

Age-old hypocrisies are explored here too, such as how the man is expected to have any relationship he likes during the five years they’re divorced, but Amanda’s activities are seen as promiscuous. She skewers the assumption, naturally, mocking Elyot about crinolines and caraway biscuits.

Love them or loathe them, and at various points you’ll do both, Amanda and Elyot prove that the middle ground is where the real relationship happens. Rejecting the constraints of the traditionally feminine and the pomposity of the manly man, they are most compelling when gender roles are inverted, or firmly wedged in a sort of androgyny where both can be equally wonderful and equally awful. Proof, if proof was still needed, that what society expects and who we are in our private lives are often not the same thing at all.

Private Lives is showing at the Gielgud Theatre in London until 21 September.

Photos are from the Private Lives West End website.

Lola Ripley is a writer who likes her drama on stage, on screen and on the football pitch, living in London and working on her first novel. Tweet her @LolaRipley