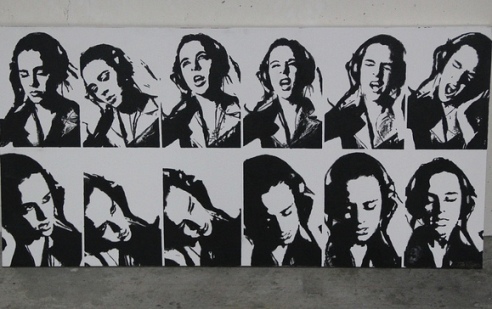 Breaking out of isolation: feminism and creativity

The myth of the lonely artist, chipping away by herself in a corner of the house, reminds me of the myth that sexism is just a personal, singular problem of our own making, not institutionalised oppression. This myth of the individual keeps us isolated, quiet and hopeless. Sexism and isolation are, in many areas, and especially in political and/or creative areas, most definitely alive and kicking.

I think of myself as a creative person. I write and play music, I write about music, art and sexism, I make great soup, I collect things, I grow a garden, I hang out with my friends, I take photographs, I think about books I’ve read and films I’ve seen, I make friends with my neighbours. I’ve spent the past few years trying to build an independent life as a Disabled person trying to take my music and art seriously and writing political songs. A lot of the time I feel paralysed by isolation and fear about the world and my situation in it.

Being a solo musician is probably one of my loneliest creative acts. It has often seemed that I’m the only female performing at the open mic nights I go to or venues I’m booked with. Most of the music promoters, studio technicians, photographers and the audience are blokes. It’s also rare to come across other musicians who sing about sexism, the effects of war or land ownership.

Media is constantly trying to distract us from our own lives and how the choices we make affect the rest of the world. The whole media stream is screaming ‘sex’ and ‘money’ and ‘success’ into our minds, every second of the day. It seems like I shouldn’t waste my time thinking about things which I care passionately about. I should get on, write songs about fucking and break-ups (because that’s where there’s money to be made), or I should just not bother at all and get on with real life (get a real job, get married, get a mortgage, get an ironing pile, have 2.4 children and turn on the TV). But that’s not me.

I had a new experience of music at an event organised by my local feminist group, Bristol Feminist Network, a community group of women and men from the Bristol area who are interested in discussing feminist ideas and actively campaign on issues of gender inequality and oppression. BFN organise an annual event called ‘Where Are All the Women?’ The event is promoted as an evening to celebrate the creative and activist achievements of Bristol’s women and features local speakers, journalists, musicians, performance poets and artists.

When I first heard about it, I pushed myself to get on the line-up despite feeling very nervous. I had previously tried to get involved in my local music scene but something there was really hard that I couldn’t seem to get past and I thought I must be doing something wrong.

I remember shaking while singing my song Newington Green. The idea for this song came to me as I was walking through Newington Green in London one sunny afternoon with a female friend. Our short walk had been followed by so many pairs of male eyes, it seemed as though the eyes were all on stalks, following us around corners, tracking us down.

We came to the site of the first school for girls, founded by Mary Wollstonecraft in 1784, writer of the 1792 manifesto A Vindication on the Rights of Women. A huge banner proclaimed the site the “birthplace of feminism”. Here was a reminder that the fight for the rights of women has been going on for hundreds of years and still needs to go on today when women cannot walk down a street without being sexually objectified. As the lyrics and the vocal presentation of the song are quite provocative, it’s not a comfortable song to perform or listen to.

Playing this in a 100% female line-up and for a female dominated audience completely changed my experience of performing. For the first time I realised how frightening I find it to always play and promote myself at male-dominated line-ups and venues (with audiences rarely more than 20% female), feeling all the time off-balance and unsure of my right to take up space. 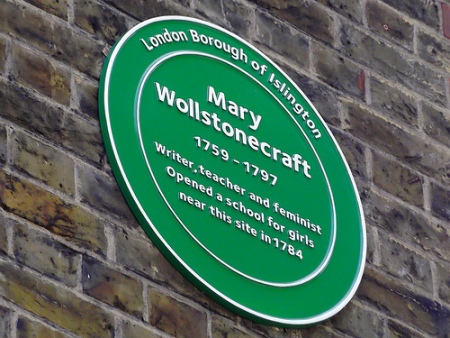 Singing in front of an audience who I knew were not only sympathetic but also similarly enraged opened up a kind of hopefulness I’ve rarely felt before. It helped me to claim the singing of the song for myself as well as getting to fully claim the space around me as a feminist performer.

I could also notice that there were other creative feminists out there. Even if they weren’t performing explicitly feminist or political work, it was good to recognise that all of us had common ground in the belief in gender equality.

On another occasion, I was at the first Bristol Women’s Literature Festival, another BFN affiliated event, superbly organised by the feminist activist, writer and novelist, Sian Norris and was chaired by the writer, journalist and broadcaster Bidisha. The weekend brought together UK women writers, academics and feminist commentators for a weekend of thought-provoking discussion, debate and activity.

During the final questions I realised there were at least three other feminist musicians in the audience who I didn’t know. I was then in the middle of writing an article about creativity and feminism for a local music magazine, Drunken Werewolf, and was getting righteously angry about the isolated place of female performers in the hugely male-dominated sphere of the music industry.

I became inspired to try and reach out to other creative feminists. This was the start of Feministcreate. I imagined a place where creative people, who are also passionate about and committed to gender equality, could come together, whisper, shout or show off about their work or project and see what other like-minded people are up to.

Currently the blog is a platform to profile creative people and their work. It also carries in-depth interviews. I’d like to reach and meet more creative feminists, online and face to face. I’d like to release feminist music and record other performances. And I’d really like to see the site expand in ways I can’t even imagine. I’m also interested in how the arts and creative work exists in a world where it seems only a few are able to make a living in their field and others seem to have to exist in a spiral of Arts Council funding and other charity.

It’s been really exciting for me as the editor/founder of the blog to see, hear and read about other feminists’ creative work. Knowing that people all over the world are viewing the blog and getting excited about it has had a big impact on my own feelings of isolation as an artist. I’ve found myself doing more work, taking more risks and talking to more people about my work and projects.

I think that it’s important for us as feminists to take up space and learn to be more visible about the projects and work we put out into the world and the internet seems to be a great way to start.

I’d really like to welcome you to take a look at the blog and encourage you to think about taking yourself, and any creative stuff that you do, more seriously, in whatever way makes sense for you.

First image is of art work by Robert D. Brooks based on a set of photos by Rossina Bossio of a woman with headphones listening to music, uploaded by Flickr user Robert D. Brooks. Second image is of a plaque in Newington Green, London with the text “Mary Wollstonecraft: Writer, Teacher and Feminist, Opened a school for girls near this site in 1784”, uploaded by Flickr user DAVID HOLT.