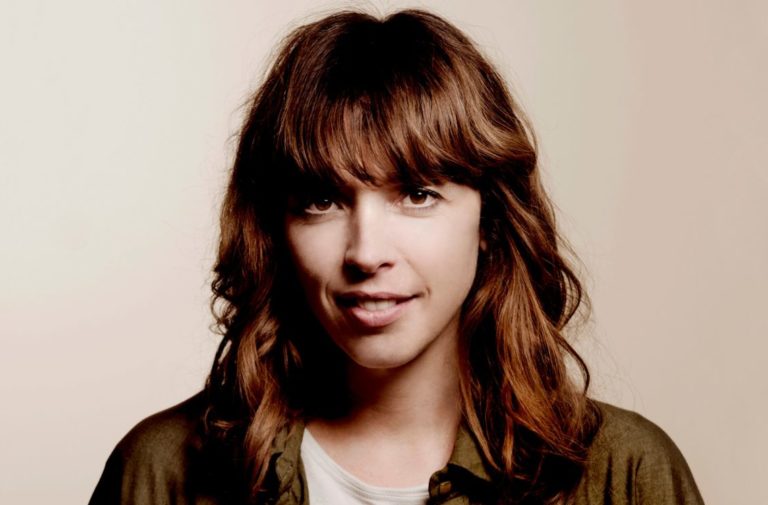 Bridget Christie: A Bic for Her

Opening with the announcement that her show was in fact the second out of 26 warm-up gigs for the Edinburgh Fringe, Bridget Christie’s performance is haphazardly and anxiously endearing but with an unrefined, genuine and powerful message. Christie is a comedian, a wife, a mother and can scuba dive. Christie is a woman. She is unapologetic.

In a “two-thirds full, provincial… thanks for coming” theatre, Christie urgently fumbles through papers on a clipboard and in a memorandum notebook, stammering and shrieking through a plethora of important feminist issues. Her tendency to tick off subjects and occasionally write notes throughout her set is awkward – this is not a criticism. Her awkwardness is hilarious to the point of surreal and it is at times uncertain whether the audience are her conspirators or whether she is simply taking everyone for an experimental ride with her self-conscious brand of comedy, pushing for laughter in the oddest places. 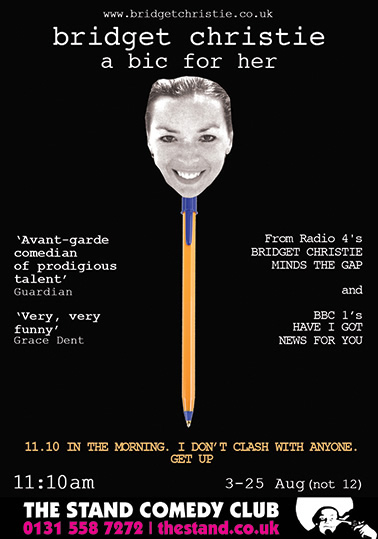 Exuding well-discerned sarcasm, she breaks it down further by reading choice quotes from both public figures. Christie shares how she declined to write a column for a magazine about her own feminist icons, as she was discouraged from writing about Malala Yousafzai by the publication because they wanted to use a photograph of Lena Dunham instead. If this doesn’t seem like laugh-a-minute comedy material, it certainly feels necessary and engaging to watch an articulate and intelligent adult spend a considerable amount of time expressing her utter love and admiration for Malala.

Christie addresses the difficulty many people have with the term “feminist” and the difficulty many people (women amongst them) have with admitting, for example, that they think women and men should be equal. This is something I have been thinking about for a long time: why do some people seem to find it so embarrassing to be a feminist? Surely, the alternative is ridiculous. Why does Jackson Katz call himself an “anti-sexist activist” instead? Christie also ridicules the gratitude with which feminists are often expected to react when a man suggests that women’s rights are important.

“GOOD!” she screams. In a particularly bizarre moment, Christie invents an audience of polite male hecklers to whom she explains that she is sorry but she just doesn’t yet have the skills to cover such issues as genital mutilation or child brides in a short comedy set.

I almost want the set to end here, with the audience plunged unexpectedly into self-awareness and awkwardness

The title of the show, A Bic For Her, comes from the strange marketing angle that the makers of Bic biros used when they designed a series of pens specifically for women. They are available in a variety of pastel shades and have a cushioned grip. Christie demonstrates how difficult it is for her to hold a regular biro in her tiny female hands, before using her uncanny ability to portray people from the past. As she adopts the persona of all three Bronte sisters, the audience is told why such classics as Jane Eyre and Wuthering Heights were so terribly one-dimensional: they just couldn’t get on with such masculine writing apparatus. If only more regular household products could be tailored to our weaker brains.

At times Christie’s comedy visits some very dark places. In an instant she can destabilise the audience by dropping from a mischievous rant into an uncomfortable portrayal of reality. It isn’t a gimmick or a tool – she makes you care about what she cares about. Towards the end of her set, Christie discusses domestic violence and the value that our government places on a human life. Monetary comparisons between a hypothetical murder case concerning a woman killed by her partner (one dead woman), Margaret Thatcher’s funeral (one dead Tory) and the high-speed rail network (various punctual humans) are drawn. Christie deduces that, to David Cameron, 11 victims of domestic abuse have the same value as the ex-prime minister. This doesn’t end with a joke and it is brutal. I almost want the set to end here, with the audience plunged unexpectedly into self-awareness and awkwardness. Naturally, Christie lightens the mood with clever one-liners, but the urgency of the message is clear and real.

Bridget Christie is, in a word, genuine. This is a brave move for a comedian. Perhaps her honesty is a product of the under-rehearsed state of a show still in development; unfiltered and uncompromised. I hope that by the time it reaches Edinburgh she continues to deliver her set with the same chaos and impulse. Christie’s passion for feminist issues is raw and accessible. Her commentary is an acute display of perfectly timed comedy that gauges her audience confidently, with challenging, but not alienating, bursts of sarcasm and reckless whimsy. At an awkward time when misogyny appears to be making a comeback Christie is a refreshing feminist voice, relevant and funny as hell.

The comedy section is new to The F-Word. If you would like to join the reviewer pool or pitch a piece, get in touch with [email protected]

First image is of comedian Bridget Christie. Second image is a poster for her new show along with an image of a bic pen with Christie’s head where the pen lid should be. Poster details are listed above.

Alicia Rodriguez has recently graduated with a BA in Fine Art from Norwich University of the Arts. Some of her work and writing can be found here