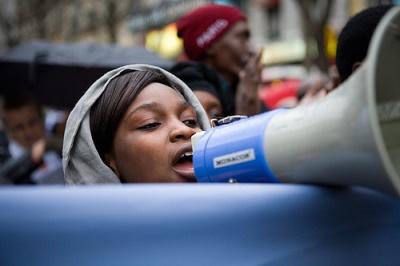 Fighting anti-immigrant racism in the UK

Chitra Nagarajan reflects on the UK’s history of racism towards immigrants – as well as the positive benefits of immigration – in light of recent Home Office targeting of immigrants and black people, and explains what we can do to fight back

By Chitra Nagarajan, who blogs here and tweets here.

Intense debate and action on immigration is a recurring theme in British politics. Hostility towards immigrants has always been a feature of British society but it seems to have particularly intensified recently. In June, Theresa May introduced a refundable £3,000 bond for visa applicants from countries seen as at high risk of overstaying. In July, a government van campaign seemed to take its lead from far right groups, warning that people should ‘go home or face arrest’ if in the country illegally. The most recent furore has centred around spot-checks of people at underground stations that seem to be targeting only black people. This is hardly news to some of us as it has been happening for some time, but the news of the racial profiling in particular has led to it being picked up by the media and many speaking out against the practice.

Of course the intersection between women’s rights, government policy and public reaction to immigrants has always been an arena of struggle for black women. Post-war policies meant Caribbean women, who came to the UK independently and in almost equal numbers to men in response to British government recruitment drives, could only claim rights on the grounds of marriage. In the 1970s, the practice of ‘virginity testing’ i.e. state sanctioned sexual assault of South Asian women ‘tested’ whether she was a ‘bona fide virgin or fiancée’. In recent times, we have seen attempts to limit family-related migration and remove legal aid from non-detention immigration cases, especially problematic for women subject to domestic violence. In addition, the government uses women’s rights to justify racist immigration policies, such as banning non-EU spouses under 21 from entering the UK to ‘prevent forced marriage’ in the face of little evidence existing showing the link. For more on migration, race, class, gender and the state, read here.

Unfortunately for British politicians, it seems as necessary today to look tough on immigration as it was to be tough on crime a decade ago. Analysis is based on perceived voter appeal rather than on facts. Although the narrative of popular anxieties about the ‘influx’ of refugees, asylum seekers and migrants and their demands on public services continues to be challenged by evidence and research, it remains the dominant discourse. Immigrants, including those from Eastern Europe, actually have a net positive contribution to the British economy. Recent Office of Budget Responsibility figures even show that if the UK had zero net migration, the debt-to-GDP ratio would be 40 percent higher and that it is probable that immigrants make a more positive contribution to public finances over their lifetimes than natives. The Organisation for Economic Cooperation and Development stated recently that public debate about immigration across ‘developed’ countries is being distorted by unfounded concerns over the financial burdens new arrivals put on governments and that, in some cases, politicians find it easy to stereotype immigrants for political gain.

The Ouseley Report, commissioned after the riots of 2001, found Bradford’s problems were rooted in widespread poverty and social disadvantage faced by working class families and youth of all racial backgrounds. What is actually the problem is government policy that promotes decline in state institutional responsibility, continues to fail to address the housing shortage and actively cuts back on and underfunds welfare services. This continues to be overlooked in the immigration debate and fails to be addressed meaningfully by politicians and commentators who scapegoat immigrants while at the same time promoting cohesion and shared citizenship. How are immigrants who see signs telling them to go home supposed to feel a sense of belonging to the nation? The racism and the ‘Paki go home’ signs that were ubiquitous in 1990s Oldham definitely contributed to my actively rejecting any suggestion of British or English identity for years.

I have spent the past few days working with others to add to the growing mobilisation against all of this. We formed Action Against Racism and Xenophobia, an alliance of academics and activists. We started a petition to tell Theresa May and the Home Office to stop public targeting of immigrants, which gained 1,000 signatures in less than 24 hours. We have devised a street survey to find out people’s experiences and perceptions of the government campaign so that we can find out what is actually happening and how people feel about it. We are going in small groups and conducting these street surveys, as well as distributing rights information at the same time to ensure that, if someone is stopped, they will know their rights.

The debate is dominated by the perception that most people are profoundly anti-immigrant. We need to show support for an alternative view: that people in the UK are against this unjust, discriminatory and racist targeting of immigrants and resist the narrative that ‘they come over here to take our jobs and benefits and are the cause of all our problems’.

So, what can you do?

Get in touch if you are able to translate rights information into other languages, take part in distributing information on rights and/or conduct the street survey. You can email aarxgroup [@] gmail [dot] com or tweet me (@chitranagarajan)

Attend one of these public meetings (registration required)

Donate to enable distribution of advice and information, a programme of public education on the reality of immigration, information and resource packs for migrant community organisations and more – get in touch with 0208 478 4513 or rita [dot] chadha [@] ramfel [dot] org

Photo of a black woman shouting into a megaphone at a protest by looking4poetry, shared under a Creative Commons licence.