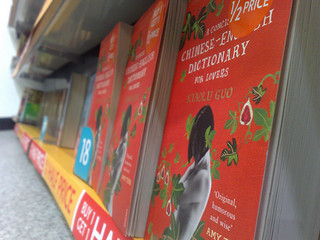 I’ve always looked sadly on the fact that there are more wonderful books in existence than I will ever be able to get through in my lifetime. (Though I suppose, practically speaking, this actually works out well for me – I ought never to be short of reading material.) As the F Word’s Fiction editor I am frequently reminded of this by the many interesting reviews that come my way, some about books I will probably never read. However, I will certainly investigate Xiaolu Guo, the author featured in the latest offering from reviewer M. Lý-Eliot, sooner rather than later:

In her earlier work in particular, Guo tends to focus on adventurous young female protagonists from rural China, forced into the metropolis to escape the devastating dreariness of impoverished peasant life. And in a way that closely resembles Guo’s own biography, ideas of reeducation and internal revolution, or 反身 (fǎnshēn – meaning ‘to turn the body’ in Mandarin) – are crucial. Time and again her engaging protagonists undergo complete, painful destructions of their pasts and their memories in order to survive in the contemporary metropolis, be it Beijing or London. […]

Female isolation is a particular theme in Guo’s early novels, especially because the characters tend to be surrounded only by men. Embarking on her first screenplays, Fenfang tries to write a female character before suddenly realising that she does not understand women and has no female friends at all. In her words, “It seemed every woman in this city was busy with her children or her mortgage. Money was the only friend she needed. And I wasn’t my own friend either.” In Guo’s representation of China in the 2000s, the country’s rapid development as a market-based economy destroys any sense of solidarity that might previously have existed between women, especially for women with an artistic, non-conformist bent like Fenfang. Older women spy on her, accusing her of sexual impropriety because she lives alone, and she is totally dependent on male friends, partners and film directors for emotional and practical subsistence.

Sounds fascinating. Plus apparently a central feature of one novel is an “out-of-place and smelly eel”. What more could you want?

Image shows a row of copies of A Concise Chinese-English Dictionary for Lovers in WH Smith (used under a Creative Commons licence, with thanks to BuhSnarf.