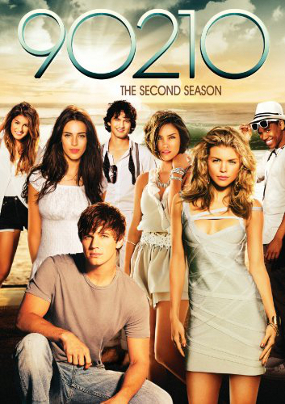 With its fifth and final series currently showing on E4 in the UK, the US fictional teen drama 90210 has tackled some familiar issues affecting young people. Robyn Harris goes back to series’ two and three to examine two storylines where female characters experience abuse and is disappointed to find the show ultimately doing very little to help dispel victim blaming.

Ever since reaching my teens, I have often found myself to be powerless against the lure of scandalous US (United States) sitcoms. Much like my unabashed devotion to the various different types of “reality” television that have stormed the small screen in recent years, I am drawn to the unrealistic absurdity of some US dramas – with my absolute favourite being 90210. I always find myself never quite believing the plotlines to be within the realms of possibility but equally unable to detach myself from them. Was it the sensational beauty of the cast members that got me hooked? Or perhaps it was the salacious existence of such rare and profound creatures? But let’s not get too bogged down in detail; each of those things were the bait and I was shamelessly ensnared.

However, since I have long proceeded my teenage era of existence, I have outgrown the luxury of ignorance and am left with a catalogue of unanswered questions in my mind. For example, how realistic is the hyperbolic lifestyle of the residents of the famous zip code? Have the more troubling aspects of the sex lives of these US teenagers led to a dangerous precedent being set out for the real-life High School goers of the US when it comes to the acceptance of abusive behaviour? And, most importantly, does this precedent of acceptance contribute to the rape culture that infests modern day society?

Aside from the intangibility of the lives of these teenagers (let’s not forget that the actors in 90210 are portraying the lives of people much younger than themselves), I would like to ask: is there evidence of this US drama promoting victim-blaming in cases of sexual incursion against young girls? Or does it highlight the issue and then seek to displace it?

The original iconic 1990’s/2000’s show, Beverly Hills, 90210, was aired from October 1990 to May 2000 and produced by Spelling Television. The modern day adaptation, produced by Rob Thomas, Jeff Judah and Gabe Sachs, dropped the prepositioned city name and re-created the show as simply 90210. This ran from September 2008 to May of this year (shortly after it had exhausted all the possible ridiculous avenues for the plot to take).

Typically, the more current 90210 satisfies the entertainment industry’s need for scandal and sensationalism through the use of flawlessly beautiful actors, the promotion of a rich and inconspicuous lifestyle and a succession of high status happenings and glamorous events. The producers have managed to amalgamate a variety of High School stereotypes in aid of creating a falsely entitled “see, we can all get along” friendship group. Throw in a few expensive cars and the odd trust fund and we have ourselves the perfect misrepresentation of High School entity.

Having said all this, I would say there is one thing the show promotes that I think can hold a candle to reality: its suggestion that some of the female characters are falling at the mercy of “victim blaming”, a phenomenon that is encapsulated in rape culture…