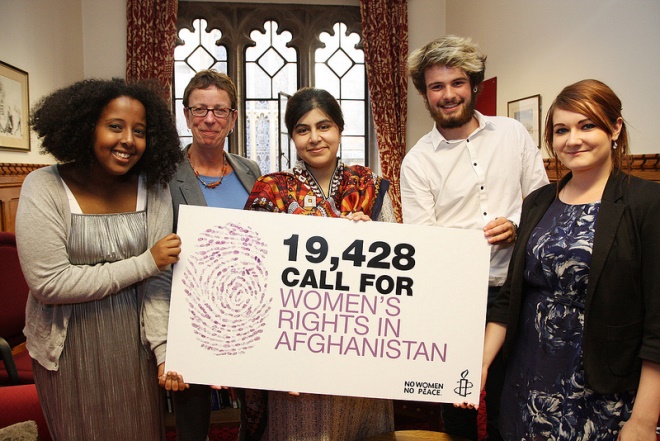 Warsi: Women can and must play a crucial role in building the Afghanistan of the future

Our April guest bloggers, the No women, no peace. campaign, report back on their petition hand-in last month

After 4 months of campaigning, and 19,428 signatures later, No women, no peace. and Amnesty UK handed in your petition calling for strong UK action to tackle violence against women to Baroness Warsi at the end of last month. We want to thank F-Word readers for your support on the petition, and the No women, no peace. campaign.

In Afghanistan, as in most parts of the world, violence against women is endemic in society. More than 87% of Afghan women experience domestic abuse in their lifetimes, yet women are often excluded from political and peacebuilding decision making. Our petition brought the facts of this reality to the desk of Baroness Warsi, a Cabinet Minister, who commented:

Tackling violence and discrimination against women and girls is essential for a stable and peaceful Afghanistan, for building a stronger economy and a fairer society.

Women’s political participation gives voice to a marginalised section of society, enables women to shape the decisions that affect their lives and will ultimately secure the sort of future for Afghanistan that its people deserve.

Praising the work of the campaign in protecting and promoting the rights of Afghan women, Warsi welcomed the petition and commented:

The UK remains absolutely committed to Afghanistan, and this commitment will continue after 2014 when our combat forces leave. Women can and must play a crucial role in building the Afghanistan of the future.

By coming together, we have not only brought this issue to Baroness Warsi, but also ensured it is an issue the Government cannot afford to ignore. It is through our continued pressure, determination and solidarity that we can hold the UK government firm to their commitments to the women of Afghanistan.

This is a crucial time to protect Afghan women’s rights, as international forces prepare to leave Afghanistan in 2014. The No women, no peace. campaign will continue to stand with Afghan women and demand that their participation, safety and voice in public life is supported and upheld if we are to see a stable Afghanistan moving forwards.

The image shows Baroness Warsi and four other smiling people holding a sign that reads “19,428 call for women’s rights in Afghanistan” next to a large fingerprint, the candle/barbed wire Amnesty logo and “No women, no peace”.