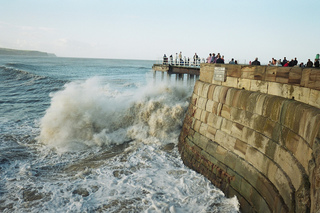 It’s the time of the week when we round up the stories that we spotted this week that we didn’t have the time, capacity or spoons to cover. We don’t agree with everything we link to – some things we just found interesting or wanted to draw attention to. Also bear in mind that some external websites may not be safe spaces, so do take care before clicking.

And in a change from the usual kind of video that concludes these round-ups, I am sharing this just because I discovered the phenomenon this morning and found it really quite wonderful. If you need some cheer in your life, check out some springboks pronking.

[The image is a photograph of a large wave crashing against Whitby harbour wall. It was taken by Mark Morton and is used under a Creative Commons Licence]