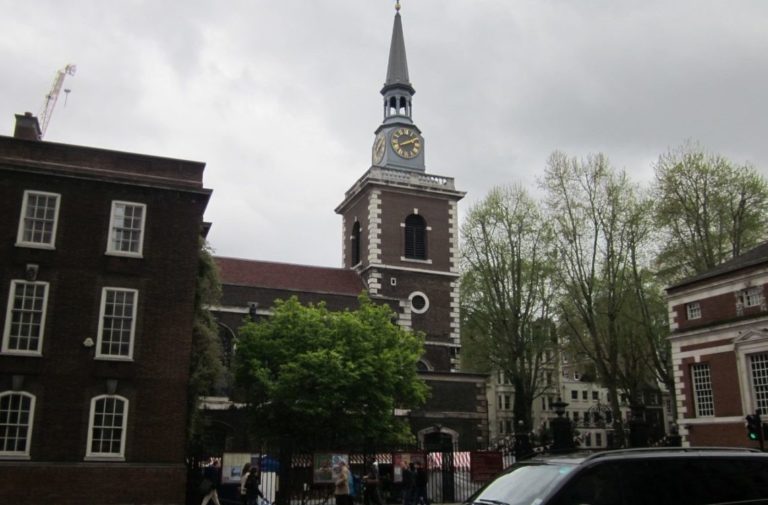 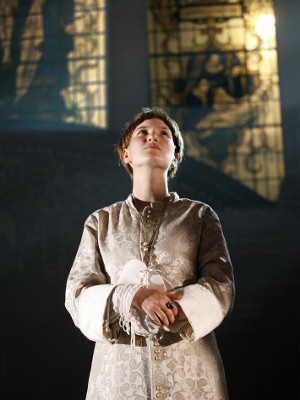 This production, commissioned and performed by the National Youth Theatre, was explicitly feminist in its expressed aims. Pope Joan was supposedly a medieval woman who disguised her sex and rose through the Catholic Church to its highest position, only to fall pregnant, give birth and be shunned. Her legend is one that has divided historical opinion. Playwright Louise Brealey explains in her introduction to the play: “Whore, heretic, heroine, pagan, demon, Pope Joan has been called them all. Over a thousand years of history, she has been deployed on behalf of, among others, disaffected monks, Reformation Protestants and feminist theologians.” Brealey herself was intrigued by the circumstances that would create such a person, and decided to write the play to “have a stab at telling her story and find out what she might have to say to a 21st century audience.”

The play starts with Sophie Crawford’s Pope John (the name of her male identity) binding her breasts in bandages. Through song, we are told that this is the story of Our Lady’s annihilation: the story of breast amputation. This message is continued throughout the play, as we learn that in hiding her sex and gender, the Pope becomes hard-hearted in order to convince others of her rightful place among men. She is a defender of the faith, inflicting cruel and severe punishment on non-Christian criminals and banishing a prostitute out of the city. This put me very much in mind of the modern archetype where women who hope to succeed in business can feel pressured do so by replicating traditionally masculine behaviour, demonstrating that Pope Joan remains relevant for today’s audiences.

In showing how the Pope found herself in such a position, a woman masquerading as a man and apparently abhorrent of her own sex, Brealey contrasts scenes of Pope John preparing for Easter Sunday, with Joanna, the girl she once was. We see that Joanna was a curious, inquisitive and religious child, full of questions and desirous of knowledge but denied learning due to her accident of birth as a woman. Joanna, aware of the restrictions upon her, chooses to cut her hair and don male clothes in order to enter a seminary and pursue learning. She excels there but is constantly punished for her obstinate insistence on recognising non-traditional texts and opinions. She believes in a Christianity where Jesus valued Mary Magdalene: a scorned character for Medieval Christians. 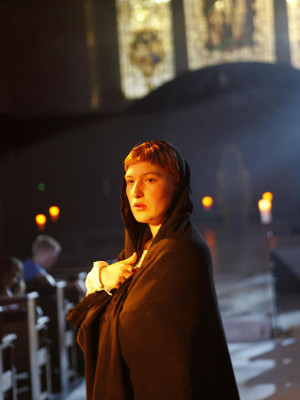 Brealey succeeds in showing why Joanna would have chosen to live as a man, demonstrating that she was coerced into the deception she enacts by an intolerant society and Church. Some people interpret the legend as suggesting the Pope was trans, but this is not an avenue that Brealey chooses to explore. She focuses instead on the more mainstream assumption that a woman eager for learning necessarily had to present as a man in order to paradoxically nurture her own identity as a Christian scholar, an identity which perhaps becomes more important than her female one. However, there is a glaring gap between the young girl and the older Pope, and at no point do we see just how the idealism of Joanna transforms itself into the somewhat stiff cruelty of the Pope. We understand why Joanna chooses to live as a man, but not why the behaviour she then enacts is so vindictive.

The play is set a few days before Easter Sunday and John, famous for a scandalously close relationship with a favoured cardinal, is now pregnant. Against religious impulse, again forced into a moral dilemma by the severity of the Church and its lack of freedoms, the Pope attempts to abort the pregnancy through the use of herbs, but fails in doing so. Over the next few days, the Pope begins to feverishly unravel, as enemies plot against her and her secret body is accidentally revealed. The culmination comes on Easter Sunday. Threatened into abdicating by Robert Willoughby’s brilliantly played Anastasius, who hopes to become Pope himself, John uses her last speech to lecture the Church on its misguided approach to women. She bathes the feet of the prostitute she’d earlier banished, reciting the story of Mary Magdalene’s doing so for Jesus, and ruminates on the idea that when God punished Eve by making Adam her master, perhaps He only intended this to be true until Jesus came to die for the sins of humanity – women and men.

The problem with John’s feminist evangelising is that it is very sudden. Brealey has expressed, “My Pope Joan is the story of a lonely, clever, ambitious woman who has more enemies than friends and who risks her life daily for the cause she believes in. She wants to change medieval Christianity, and if she had succeeded, she would have changed the world.” This is an admirable sentiment but the play as it stands shows a Pope who only on threat of her own demise stood up for women. We go from the principled young Joanna to a wooden, self-denying Pope and then to this final scene of proselytising. We hear that the Pope has had love affairs, and see her react longingly to a sensitive cardinal, but these romantic and sexual impulses and actions are not explored fully enough to tie into our image of the Pope. We never fully see what leads to this transformation – only that it occurs.

For a play focused on feminism, it’s noteworthy that there are only three female actors in a cast of 50 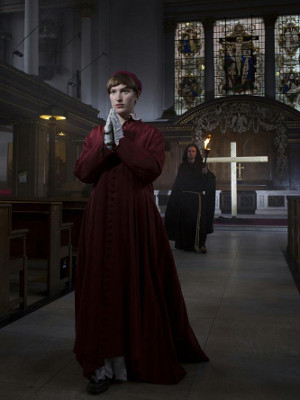 The production succeeds in showing a woman alone in a man’s world and how problematic that society was. Yet its messaging remains simplistic while it over-exerts itself in other dramatic elements. The large cast of monks provides a suitably atmospheric backdrop, but the production’s mixture of modern and naturalistic dress, speech and characterisation is sometimes jarring, while its more symbolic scenes are occasionally sensationalist and lacking in additional insight. This includes one where the topless Pope climbs upon a group of monks, raises her arms wide in an image evoking Jesus on the cross and is then carried off stage, prostrate.

For a play focused on feminism, it’s noteworthy that there are only three female actors in a cast of 50. It may well be the case that the National Youth Theatre wanted to emphasise the solitude of these women, and the Church’s rejection of them, but why is it that the third woman, the prostitute, is almost entirely speechless? And why could no hooded, lineless monks have been played by women, so as to give young female actresses the chance to develop?

The play is performed in a church and this setting adds a lot to the story. Space is used inventively, if sometimes unnecessarily: audience members often had to twist around in their seats to witness action behind them and it was not always clear when characters were hidden in the recesses of the building.

Overall, Pope Joan is an interesting play, but in trying to achieve a lot dramatically, it sometimes missed the mark in its messaging. Its plea was simple – for women to be treated equally to men – but this was very much grounded in somewhat elementary Christian thought and was not explored further. Were there religious or moral implications for John’s forbidden romances? Did John’s enemies deeply hate women or were they simply desirous of power and willing to use any weapons available in their pursuit of it? Did John remember her womanhood and let this influence her once she reached the papacy, other than in bodily terms? It would have been interesting to delve into some of these questions more deeply. This is a very good first attempt from Brealey but one that would benefit from further development and a deeper focus on the relationship between religion and feminism.

The feature photo is the 17th century St James’s Church from Wikimedia. The first photo in the text, by Simon Annand, shows the character of Pope John in a white robe, looking heavenwards, with a stained glass window in the background. The second photo, by Simon Annand, shows Pope John wearing a black cloak and hood, looking anxiously into the middle distance, with stained glass windows and candles in the background. The third photo, by Helen Maybanks, shows Pope John in a red robe walking through a church, hands together in prayer, followed by a man in monk’s garments holding a flaming torch.

When Shoshana isn’t considering the needlessly complex relationships between gender, sexuality and religion, she can often be found with a book in hand and a cup of tea