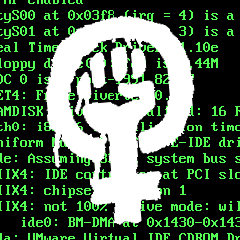 This is a guest post by Milena, who is a technology manager by day and a blogger and campaigner by night. Causes she is passionate about include LGBT domestic abuse, violence against women, and digital rights. She blogs at milenapopova.eu and tweets as @elmyra.

On September 12th, a diverse group of academics, campaigners and activists will gather in Milton Keynes for a conference titled “Gender violence and virtual worlds: brave new world(s) of regulation?” Issues at the intersection between digital rights and feminism are becoming ever more pressing. The case of Caroline Criado Perez is only the most recent in a series of incidents which have shown that digital spaces are often unsafe for women and minorities. At the same time, censorship and surveillance of the internet is becoming commonplace, and in many cases it is superficially feminist arguments which are being used to justify such actions.

As both a feminist and a long-time digital rights activist, I am contributing a talk to the Virtual Gender conference 1, entitled “When Worlds Collide”. I will be exploring issues where the worlds of feminism and digital rights can appear at odds with each other: the delicate balance between someone’s right to tell me that I “need a good raping” and my right to free speech online; the need, perceived by some feminists, to stop young people from accessing pornographic material online as opposed to the dangers of creating unregulated frameworks for censorship of digital spaces.

The persistent and violent abuse that Caroline Criado Perez and other prominent feminist activists experienced on Twitter has prompted many feminists to call for tools which make it easier to have accounts automatically suspended for abusive behaviour. Yet this knee-jerk reaction is more than likely to come back and bite us. The first use an abuse button is likely to be put to is to silence exactly the same people who were previously receiving the abuse. What’s even worse is that the more vulnerable and marginalised a group is, the more disproportionately affected they would be by the downsides of an abuse button: accounts highlighting transphobia and the experiences of sex workers are already routinely suspended by Twitter.

As digital rights activists we need to recognise here what we already know as feminists: that campaigns of misogynist online abuse are a free speech issue in and of themselves. It doesn’t matter if it’s the state doing the censoring, or Facebook, or a bunch of trolls who make us feel unsafe about speaking out – the effect is the same. As feminists we need to acknowledge what we already know as digital rights activists: that automated censorship is open to abuse and tends to create more problems than it solves. We need to use this knowledge to find subtler solutions which address the real issues rather than damage our own campaigning infrastructure.

Similarly when it comes to David Cameron’s proposed web filtering measures – welcomed by feminists like Gail Dines – in the name of protecting children from “harmful content”, we need to ask two questions: what is the actual problem we’re trying to solve here; and how could the proposed measures be abused? It quickly becomes apparent that default-on web filters will not stop young people from accessing porn, while potentially denying them access to vital information around sexual health or LGBT issues. High-quality compulsory sex education in schools is the only possible answer here, yet this is something the government has almost unanimously voted against. At the same time, once such filters are operational with no democratic oversight, it becomes trivial to consign material other than pornography – say advice on abortion, or media coverage of the revelations around the NSA and GCHQ’s surveillance programmes – to eternal digital obscurity.

The worlds of feminism and digital rights will not stop colliding any time soon. If anything, issues at the intersection will become more complex and challenging. It is increasingly vital for feminists and other campaigners to understand the technologies that underpin our campaigns and actively engage with digital rights issues. Anything else risks letting our causes be used to harm not only us but human rights in general. At the same time it is also imperative for the digital rights community to reach out beyond its traditional audience of geeks in black t-shirts and ensure that the message that digital rights are human rights which affect us all reaches precisely those most marginalised communities who are most at risk when such rights are eroded.

The image at the head of this post is called #digital_feminism and was created by Helen from a combination of a partial, modified screengrab of a GNU Operating System bootsplash (GNU General Public License) and Stencil Womanpower 0969, which is a Creative Commons Attribution-Share Alike 3.0 Unported image from Wikimedia Commons.