New review: The liberty to learn 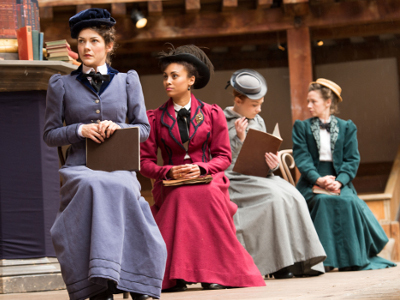 Educating women. It’s been a controversial and much-discussed topic throughout history. The thing is, if you educate women, we might be more inclined to think for ourselves – and where would that get the world? Still, despite this obvious massive downside, there have been those advocating for equal education in Europe for quite some time.

For example, Catherine of Aragon. Primarily known for marrying Henry VIII (and his brother before him – cue divorce justification), Catherine was all for equality in learning. She commissioned The Education of Christian Women, by Juan Luis Vives, which claims that women have a right to education. And there’s nothing like a Queen of England espousing a view to make it a bit trendier.

We also have Mary Wollstonecraft, better known than Catherine for her feminist credentials. Before writing A Vindication of the Rights of Women, Wollstonecraft published Thoughts on the Education of Daughters. Although focusing on how an education could make women better mothers and wives, it was still revolutionary in suggesting women should be taught marketable skills alongside analytical thinking.

There’s also the Flying University, an underground establishment in Poland meeting in secret and regularly changing location to avoid detection. Its pupils included one Marie Curie, who went on to do rather well (the only person ever to have received Nobel prizes in multiple sciences).

Around the same time as that, there was also focus on the education of women in the UK, which is what Blue Stockings is all about.

Jessica Swale’s debut play at The Globe is the powerful story of women fighting for their right to higher education, in particular the women of Girton College, Cambridge in the 1890s. Although Cambridge was the first university to host women students, it was the last to grant them degrees. “Blue stocking” was a term of abuse to describe a woman of intellectual pursuits. We need look no further than recent twitter abuse towards academic Mary Beard to see that although the term is out of use, the misogynistic attitudes that underpin it are still festering, over 100 years after effigies of female students were doused in oil and burnt in protest against women receiving degrees. After seeing this play, “blue stocking” sounds more like a badge of honour.