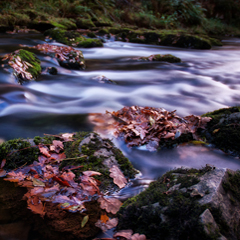 This week’s closing video is ‘Distance’ by Gill Sandell from the album Light The Boats:

Image attribution and description: The image at the head of this post is called flow. It shows some autumnal oak leaves floating in a stream and was found at ben matthews Flickr photostream. It is used under the terms of the Creative Commons Attribution-NonCommercial-ShareAlike 2.0 Generic license.