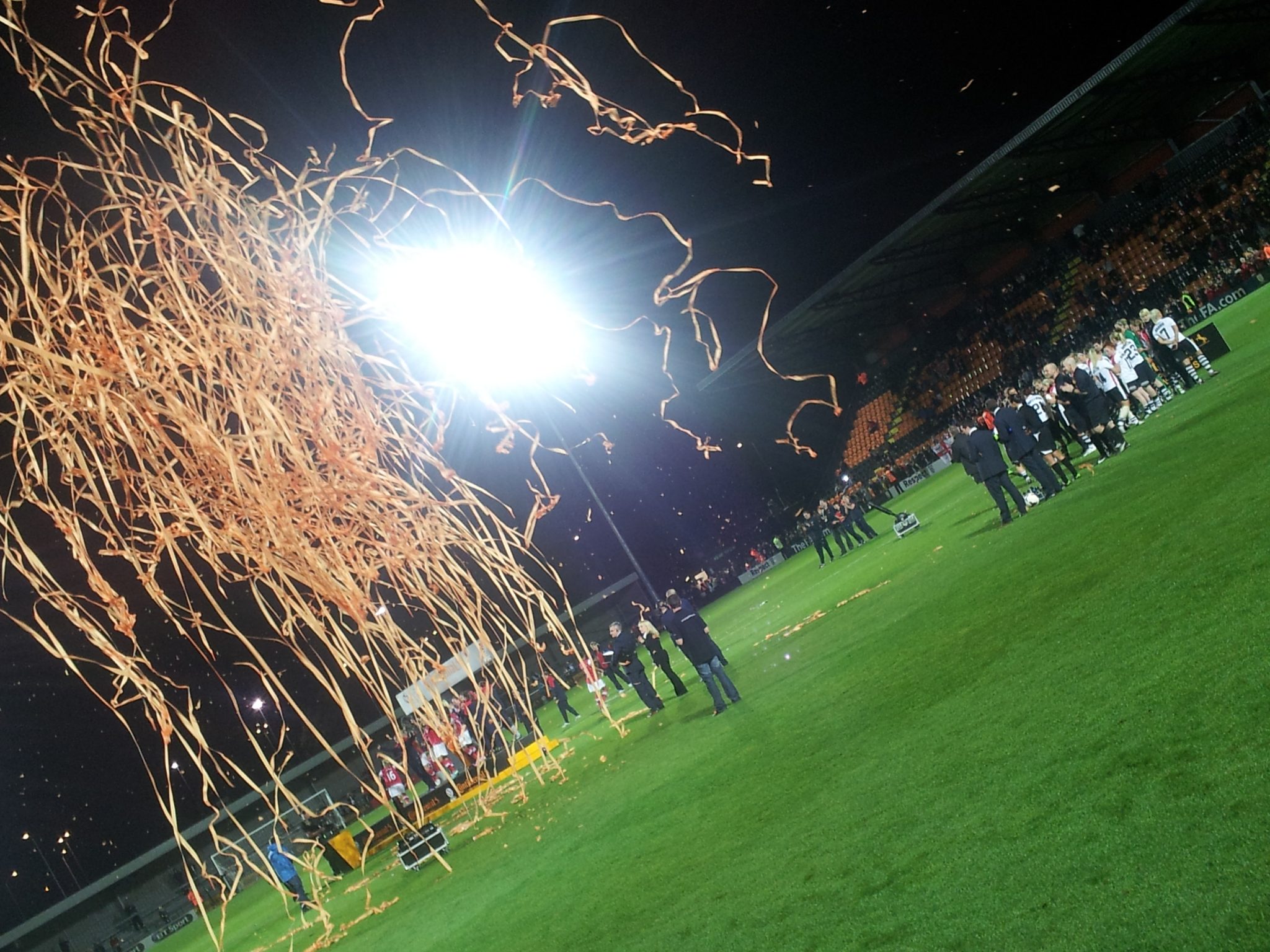 It was an overcast evening at the Hive in Edgware, with rain in the air, and a rather smaller Girls’ Football Festival outside than spectators enjoyed last year across north London at Underhill.

In fact, it wasn’t till midway through the FA Continental Cup final, between Arsenal and Lincoln, that the stands began to fill up; maybe casual fans failed to realise that it was a 7.30pm kick-off on this Friday evening, or maybe they hadn’t heard that Barnet had relocated.

The usual squads of girls’ teams populated the ground in small pockets; and unsurprisingly this close to Islington (where Arsenal’s men’s team are based) and to Boreham Wood (where Arsenal’s women’s team play their home matches) they were mostly chanting to cheer on the cup holders.

There was a rather less festive atmosphere inside the ground as well, it seemed; possibly partly the weather, but perhaps also because this match was the end to a rather unhappy season for both sides. While Arsenal failed to win their domestic league for the first time in a decade, Lincoln have ended their 18-year tenure in the city thanks to the FAWSL’s franchising system, which is moving them across the country to Nottingham, in the same season they reached their first Cup final.

Last year, the trophy presentation on the pitch was celebrated by small boys running around gleefully in the streamers decorating the podium – Arsenal midfielder Katie Chapman’s two sons. 12 months on, she’s since taken a brief maternity leave, announcing in March this year that she was seven months pregnant, and then promptly returned to first-team action in July.

Babysitting duties for her new arrival were taken for part of the first half by Karen Carney, who recently claimed a hat-trick for England against Belarus. She was there as an analyst for a TV channel showing the match live, along with her international team-mate Natasha Dowie.

So too was retired Arsenal captain Faye White, now a mother herself, and venturing into the media as a pundit and co-commentator, this time for national radio.

The match was entertaining enough to please even the toughest critic. Lincoln defended solidly from the start, with England pair Casey Stoney and Sophie Bradley immovable in the middle, and marshalling their colleagues so effectively that Danielle Carter, Ellen White and Rachel Yankey were repeatedly denied.

Yet it was Lincoln who had the first chance of the second half, with the lively Jess Clarke shooting from 35 yards out, but it flew over goalkeeper Emma Byrne’s head and over the crossbar too.

Arsenal hit back, with Scottish star Kim Little racing down the left and sending a powerful ball across the box to White at the far post, who could only manage to slice it across and wide.

White made a strong claim for a penalty shortly afterwards, brought down in the box by Bradley, but referee Lisa Rashid was unmoved.

The hard-working Arsenal striker was finally rewarded for her unceasing efforts on 76 minutes, picking up a through ball from the ever-creative Little, then moving in from the left and pelting in at pace past the goalkeeper.

Little proved herself invaluable at the other end just two minutes later, hacking a clearance from the goal-line as Byrne fluffed a punch, knocking it above her head and failing to collect on its return.

Fittingly, it was she who capped the evening with an exquisite finish, taking on three players before chipping into Karen Bardsley’s top corner on 86 minutes to wrap up Arsenal’s successful defence of their trophy.

The streamer fireworks exploded round the stadium; Steph Houghton lifted the trophy as her team-mates danced around her and their opponents looked on applauding; Chapman did her post-match interviews with two of her sons clinging to her legs and the smallest in her arms; and in the morning papers it was difficult to find a mention of this final match of the women’s domestic season.