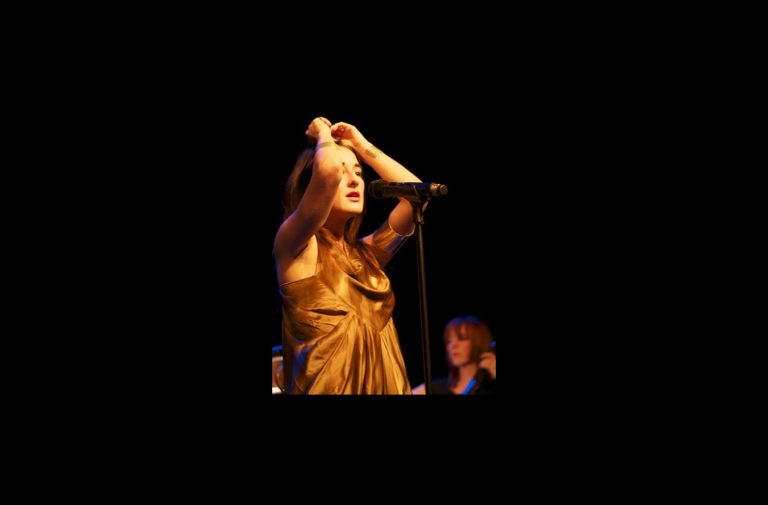 The Tabernacle – “the Taj Mahal of North Kensington” – is an impressive castle-like venue tucked away in a small side street in the middle of a West London nowhere, so it’s not until you approach the actual gates that you can see or hear that there’s anything going on there. Nika Danilova, aka Zola Jesus, said she had made an ambitious list of venue choices for this Versions tour – and this one, on 3 October, certainly seems to be intentional. The show is taking place in an upstairs space that looks more like an intimate theatre than a music venue. The stage is very low, almost on the same level as the audience, and around the square floor space there are beautifully sculpted balconies behind which a number of benches are arranged. The dimmed lighting contributes to the strange aura. It’s an hour until the show but all seats are taken, as are the crucial couple of front standing rows.

No support was announced and none happens. The tension grows as the evening goes on – three different stage times were advertised and Zola Jesus still makes us wait. At 9pm sharp the all-female Mivos Quartet appear, followed by conductor J. G. Thirlwell, the avant garde/industrial composer and producer who teamed up with Danilova and created string and beat arrangements for some of her songs on the titular Versions, released as an album in August…

Nika Danilova at the microphone on stage, with a member of the quartet just visible behind her against the black background. She wears a gold dress and her arms are held up with the elbows bent and her hands resting on her head. Taken from a performance at HAU Berlin, 5 October, 2013 (a later European Versions date, two days after the performance reviewed here). By hds, shared under a Creative Commons license.