This is a guest post by Jem, one of the founders of the Everyday Whorephobia project, with input from trans sex workers. Everyday whorephobia is a project set up by sex workers in a variety of countries to challenge the sterotypes of sex workers and highlight the abuse, on and offline that we face. We can be found on Twitter @whorephobia or contacted by email on [email protected] 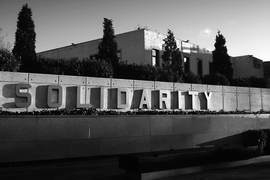 ‘No platform’ is a familiar idea for those who have fought against groups like the EDL and, in earlier days, the National Front. It is a simple idea, although not without its critics: you refuse to provide oxygen to those ideas so pernicious and vile that they have no right to be aired. People may hold them in private, and do, but at a structural level they are excluded.

I am a sex worker, I am used to the idea that things that directly impact on my life are seen as a theory to be debated by some. It’s as annoying as hell but you get used to it. What people do not seem to realise is that their debate, about gender, or legal models, or whether all women are welcome under the tent of feminism is a lovely parlour game while women are dying.

Picture this: you wake up one Sunday morning to see a friend has been outed. Now outing is a term people think they understand, but outside certain communities frankly they don’t. Outing means losing your job, dog shit through the letter box, abusive phone calls, hate mail. Outing means, in many cases, losing your children, after they have been bullied, teased and interviewed, and after you have been asked if you allow people to sexually molest them. Outing means never being able to work in your chosen non-sex work career again, trapped into sex work by people who oppose the fact you are a sex worker. Outing means being shouted at by strangers in the street, shaking with fear every time the phone rings, waking up to abusive emails as a matter of course. That’s just for a white, cis sex worker, the top of the privilege pile so to speak.

On Sunday a trans woman of colour who is a sex worker was outed by a feminist who attends conferences as a key note speaker (including RadFem2013), and has prominent feminist followers. The stats on violence against trans women, and particually trans women of colour make sickening reading. Her real name, her location and links to her work site were all listed by someone who has been given a platform and whose presence in feminism is accepted and defended.

In case you haven’t guessed yet, that feminist is Cathy Brennan. This is not the first trans person she has outed of course: from revealing the personal details of a 17 year old to his school, to contacting the employers of trans women, she delights in it. Her various sites include name the problem, where she slips in pictures of trans women alongside rapists and murderers, Pretendbians and a host of others. If you do go looking I suggest you follow the advice here.

Her latest wheeze has been supporting a transphobic group who invented a story about a trans girl attacking people in the toilets at her school. This is a huge issue to Brennan and her ilk because for some reason they really, really need to know the genital configuration of the person in the stall next to them. These are not debating points about gender and gender expression; this is targeting vulnerable women and children, people at a high risk of suicide and living with the threat of rape and violence.

Those with the privilege of not having to fear being outed advise ignoring her. Interestingly that wasn’t the advice given by feminists this summer when online abuse hit the headlines and the targets were cis white women. Others say she is entitled to her opinion, it’s noone’s place to say what is or isn’t feminism. The fact she has a platform is fine, build your own, and everyone will be equal.

Feminism, if it is to be anything but moving around the master’s tools to make his life more comfortable, has to be truly radical, not in the exclusionary way of TERFs but in a way that recognises that a well-off, white lawyer has immense privilege. Yes, we all live under patriarchy and suffer, from the patriarchal nature of society. However, to say simply by virtue of being born with a vagina you are a voice that needs to be heard in feminism is itself privileged. Feminism needs to challenge the fact that white cis women hold more power than their trans sisters, their sex worker sisters, their sisters of colour. Right now it is simply upholding the same standards that put white cis men at the head of the table, and there is nothing radical about that.

[The image is a photograph of the word solidarity on the wall of a public square. It was taken by Alex Morrice and is used under a Creative Commons Licence]