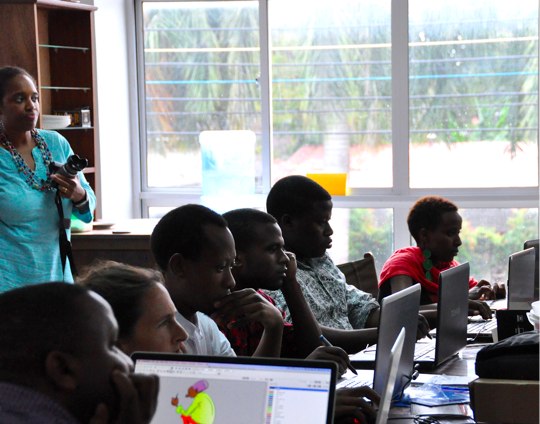 If technology is the answer, where are the women?

At the junction of two of the biggest roads in Dar es Salaam, up a flight of stairs, in a white room with white tiles and white curtains, you can find Kinu. This is a tech space, where university students come to develop apps, kids aged 6-10 learn to build robots from lego and tech businesspeople can rent a cheap desk with an internet connection. Yesterday, when I visited, a group was receiving training on digital animation.

Kinu was one of the first stops on a tour of Tanzania I am participating on as a fellow of the International Reporting Project, with a group of 11 other journalists. We will be travelling around Tanzania to learn about hunger, poverty and agriculture – and see some of the projects on the ground and in the field that are working on these issues. And I will be writing about the trip here, over the next week or so, particularly about women’s stories and experiences. 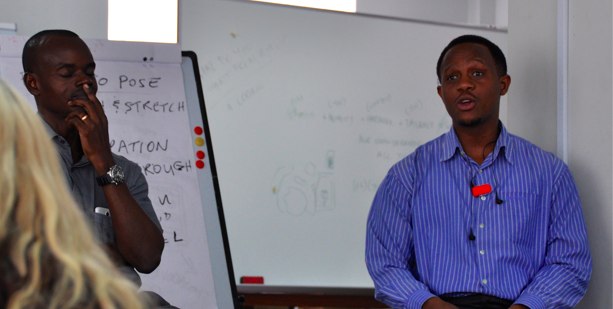 Some of the developers who come to code, socialise and trade business ideas at Kinu are working on mobile apps that help farmers access the price of crops in the marketplace, hence our visit. Some of the developers we met at Kinu are also farmers, like Benedict Tesho (above right), who is working to connect farmers with price information from the marketplace, and is also a watermelon farmer.

But I am a little sad to report that women only make up 20 per cent of the community members at Kinu, and 80 per cent are men, according to one of the founders that we met, the enthusiastic Johnpaul Barretto. In other words, it’s not that far from what you would find if you rocked up at the equivalent spaces in London like the Tuttle Club. As Johnpaul says, ‘It’s reflective of the sector.’ That’s true. But perhaps that’s not the whole story.

Next week, Kinu will host its fourth Girls’ Night Out event, this time aimed at “aunties, bibis and other ladies with a few more years behind them”. The most popular attracted 50 women. But, according to a report by iHub Research it has been difficult to keep women coming to the space afterwards:

The problem has been sustainability of the programs and retaining the women in the programs.

Meanwhile, in the broader context of Tanzanian society, adult women’s literacy rates, for example, are about 85% that of adult men, according to UNICEF. I did try and find statistics around women’s access to mobile phones and technology, but didn’t manage to get a satisfactory answer. An app being funded by the Cherie Blair Foundation, called Business Women, hopes to attract 75,000 female entrepreneurs here – but, again, information on the uptake so far is hard to find and the foundation hasn’t responded to my questions about it so far.

Back at Kinu, I also got to briefly talk to Salome Donati, a mushroom farmer. She is one of the 11 women to attend entrepreneurship training offered by an organisation called FEMTANZ. The programme is designed for women running tech-focused businesses, or about to start one up, according to their flyer. We only talked for a few minutes, and I couldn’t quite work out how Salome is using tech to grow and sell her crop of oysters, a business she started in December last year as a result of attending FEMTANZ. But she’s clearly enthusiastic. ‘It was very, very valuable to me,’ she says, particularly as a way to exchange business ideas. ‘It inspired me.’

But then she has to correct me when I ask how big her mushroom farm is. ‘I think you mean how many sheds do I have. I had one I started with, now I have three,’ she explains, patiently. I obviously have a lot to learn about farming, Tanzania, and how women fit into the picture. In the next series of posts, I hope to take you along with me as I learn.

Photos by me, of a class of animation students concentrating intently on their screens, and two developers of apps aimed at farmers. John M. Kagaruki, left, is an entrepreneur with a vast number of businesses, and taught himself the coding skills he is using for his own app by Googling.