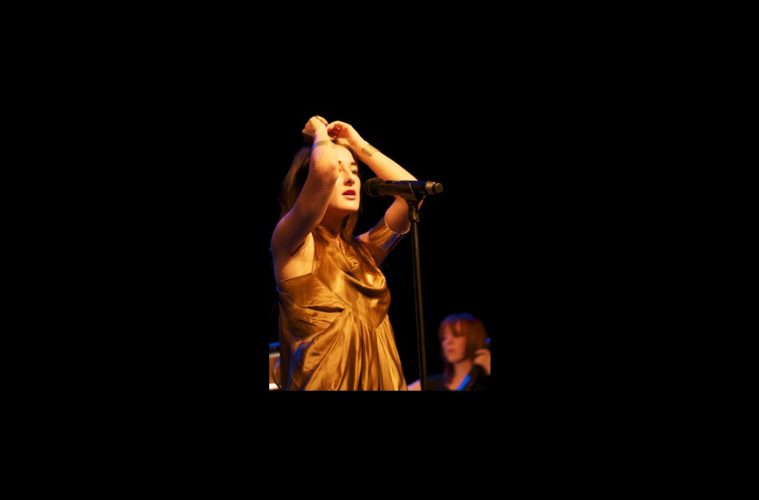 As monumental as ever

Russian-American singer songwriter Nika Danilova – aka Zola Jesus – is known for her very physical stage energy. Marta Owczarek heads to the Tabernacle in London to check out a gig with J. G. Thirlwell and Mivos Quartet and finds a more low key but nonetheless powerful performance

The Tabernacle – “the Taj Mahal of North Kensington” – is an impressive castle-like venue tucked away in a small side street in the middle of a West London nowhere, so it’s not until you approach the actual gates that you can see or hear that there’s anything going on there. Nika Danilova, aka Zola Jesus, said she had made an ambitious list of venue choices for this Versions tour – and this one, on 3 October, certainly seems to be intentional. The show is taking place in an upstairs space that looks more like an intimate theatre than a music venue. The stage is very low, almost on the same level as the audience, and around the square floor space there are beautifully sculpted balconies behind which a number of benches are arranged. The dimmed lighting contributes to the strange aura. It’s an hour until the show but all seats are taken, as are the crucial couple of front standing rows.

No support was announced and none happens. The tension grows as the evening goes on – three different stage times were advertised and Zola Jesus still makes us wait. At 9pm sharp the all-female Mivos Quartet appear, followed by conductor J. G. Thirlwell, the avant garde/industrial composer and producer who teamed up with Danilova and created string and beat arrangements for some of her songs on the titular Versions, released as an album in August.

Finally, Danilova enters the stage. Even on platform shoes, she is tiny: her head just about pokes out over the first row. Her now dark hair is in a neat bun, held by a silver band, matching a similar she has on one arm. She’s wearing a simple, but interestingly cut, grey dress and the spotlight is right on her, so vivid it’s bewildering. She starts with a version of ‘Avalanche’ (although not the slowed down arrangement from the record) and, instantly, it feels very natural to have her incredibly powerful voice un-obscured by too many electronics. “I conveniently got a cold on the plane,” Danilova complains after the first few songs. Someone in the audience immediately shouts back: “You still sound great!” and it’s true: Danilova’s vocal performance is spotless and as monumental as ever, despite the intentionally minimal arrangements of music, speech, dress and stage decor.

Danilova stares into every face in the first row, leaning in close and singing the line “It hurts to let you in”, which feels electrifying even when seen from a distance

In most of the new-old songs, the strings seem familiar and fitting, particularly on tracks such as ‘In Your Nature’. However, they occasionally sound as if they are out of tune on purpose, grabbing the audience’s attention with the unexpected. Thirlwell is the conductor but also the DJ – he puts on his headphones to control the beats but they are quite different to the ones we may be used to from Danilova’s previous work. Interestingly, the songs sound less heavy and almost more poppy than their originals, which is not usually the expected effect after adding a string quartet to a performance. Some become different songs altogether, such as ‘Sea Talk’ or ‘Night’, which feel even more raw and emotional in their stripped down versions.

One factor contributing to the effect of heightened intimacy is the fact that Danilova’s usual stage energy is largely contained on this occasion. When she supported Xiu Xiu at XOYO three years ago, she was climbing up on speakers and running around the stage; now the most she allows herself is to occasionally put away the microphone stand and walk from one end of the stage to the other. During ‘Collapse’, Danilova cranes her neck and stares into every face in the first row, leaning in close and singing the line “It hurts to let you in”, which feels electrifying even when seen from a distance. She then steps down from the stage and begins wandering in the audience but because she is so tiny all we can see is a wave moving through the crowd, sometimes her outstretched hand and, unfortunately, paparazzi-like flashes of mobile phone cameras. She keeps singing at particular people in the crowd and then stops towards the back, in an empty spot against the wall. No one has the courage to step closer and the light moves onto her, drowning out the camera lights so that even they don’t break the focus and attention. This is the most intense, compelling part of the performance. Danilova walks back to the stage slowly, ignoring the continuing flashes in her face. When she is back up she sweetly says, as the music drowns out, “Thank you for letting me do this.”

The following ‘Clay Bodies’ (not included on Versions), ‘Vessel’ and the only new track ‘Fall Back’ turn up the already high levels of intensity with even more elaborate beat arrangements and prominent string parts. For the first instrumental outro, Danilova steps back to the side of the stage and turns back, facing the curtain, as if to direct the focus solely on the music and erase herself from the setting. Some people in the audience become more animated, jump and raise fists. ‘Fall Back’ is a particularly stunning track and the lyrics are at Danilova’s most emotional: “This is my home/You are my only one … I would do anything to be the one with you”. At the end of the track, she steps to the side again but this time watches as Thirlwell and the quartet give their best to its finale. Like in a theatre, everyone comes over to the front of the stage, Danilova and Thirlwell hold each other and bow together a couple of times. Then she thanks him and the quartet and they disappear. The lights go on and because it’s a show with no support, the audience perhaps thinks maybe there won’t be an encore either; at first people start leaving but, after a few minutes of confusion, the clapping starts after all and Zola Jesus and her band come back for an encore: a fantastic, slowed down version of ‘Avalanche’ (possibly the highlight of Versions). After the final theatrical goodbye, Danilova high-fives someone in the audience, which seems to be yet another part of the fascinating collage of close and cold, full and bare, string and beat.

Nika Danilova at the microphone on stage, with a member of the quartet just visible behind her against the black background. She wears a gold dress and her arms are held up with the elbows bent and her hands resting on her head. Taken from a performance at HAU Berlin, 5 October, 2013 (a later European Versions date, two days after the performance reviewed here). By hds, shared under a Creative Commons license.

Marta Owczarek is an activist and journalist living in South London, as well as a sex-positive intersectional feminist, vegan, queer and keen consumer of culture, thriving particularly on live music. She wants to change the world, in part by being the frontwoman/singer/guitarist for a riot grrrl band Power Cunt. Amateur gardener, bread baker, craftster – overall doing her clumsy DIY best. She tweets @martalucysummer and sometimes posts on her blog Women, Fire, and Dangerous Things