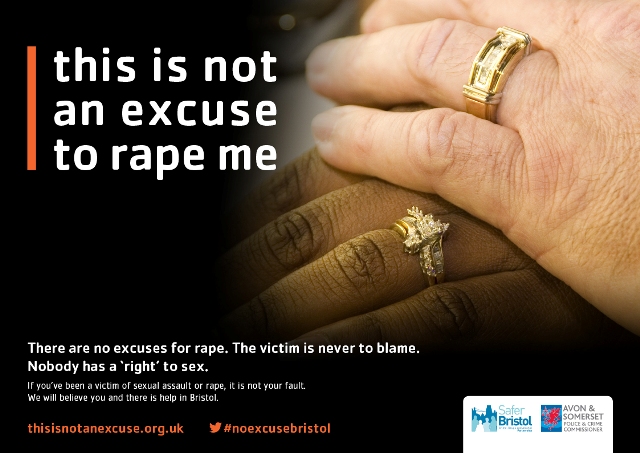 Today saw the launch of Safer Bristol’s this is not an excuse campaign. When I was first told about this, in anticipation of a BBC Radio Bristol discussion I took part in this morning, I braced myself for another round of tedious victim-blaming messages. However, I was pleasantly surprised to find the prevention emphasis being firmly placed on perpetrators. There are four key points driving this campaign:

A victim who was drunk or had been drinking is to blame for rape.

A victim is never to blame for rape whether they have been drinking or not. The rapist is to blame.

A woman wearing sexy clothes is to blame for rape.

Whatever a woman wears, she is not to blame for rape.

Consenting to one activity is never also consent for sex.

Partners have a ‘right’ to sex when in a relationship or married.

No one has a ‘right’ to sex. Sex without consent is rape.

Unfortunately, it seems these messages have been dismissed all-too-easily when they have been repeated by feminists. As Sian Norris says in her blog post about the campaign, one of her Bristol Feminist Network colleagues was previously told by the police that a safety campaign focused on perpetrators would be “offensive to men”. This makes this particular campaign an important step in rape prevention advice but, in itself, it is also a depressing reminder that getting the establishment on board is often the only way to get a feminist message taken seriously or, at least, reported on in a way that doesn’t caricature anyone who dares to call for change.

It’s frightening that even in 2013, there is still a perception that there are certain conditions where a woman can be widely considered to have surrendered control over her own body, leaving a man to now do whatever he likes with her. However, listening to the vox pops from people around Bristol, while waiting for today’s brief radio stint, I was pleased to hear most respondents firmly asserting that rape is not even partly victim’s fault, with one man quite rightly saying “I think at all times, everyone should have the right to decide what happens to their body”. However, there were still some who claimed at least some of the responsibility for rape is borne by the victim. This commonly expressed “asking for it” view (albeit often couched in It-shouldn’t-be-like-that-but-it-is) means the messages in this campaign clearly need to be repeated.

Something else that may be testimony to how far we have to go is that, even as a feminist, I actually found myself fudging my words slightly during today’s radio discussion. This was due to feeling a need to justify that this particular campaign is very necessarily focused on the rape of women by men and the sexual entitlement some men feel. Sadly, there’s no getting away from the fact that a campaign calling out apologism for the rape of women by men is very much needed and long overdue. As Safer Bristol’s campaign pack states:

Why does your campaign only feature women? What about men who are raped?

The campaign is targeted specifically about attitudes to women. It challenges the idea that women are in any way “asking for it”. The same notions don’t apply to men in the same way.

When did you last hear someone commenting that a man was “asking for it” because he was dressed in revealing clothing? Both women and men are victims of sexual violence but women are over six times more likely than men to be a victim of a sexual offence – on average 2.5 per cent of women and 0.4 per cent of men suffer sexual violence in one year (Ministry of Justice, Home Office and Office for National Statistics, January 2013).

One of the four posters for the this is not an excuse campaign. This is mostly black with “this is not an excuse to rape me” written along the top left side in large white lower case letters. In the top right is a picture of one hand over another (both wearing wedding rings). Underneath is the following smaller text (also in white): “There are no excuses for rape. The victim is never to blame. No one has a ‘right’ to sex” followed by a line containing “If you’ve been a victim of sexual assault or rape, it is not your fault. We will believe you and there is help in Bristol”. The final line at the bottom contains “thisisnotanexcuse.org.uk” (left) and the twitter bird symbol alongside “#noexcusebristol” (right). The Safer Bristol and Avon & Somerset Police and Crime Comissioner logos are on the bottom right.