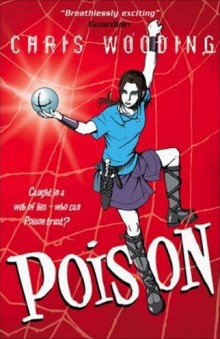 “Oh, you’re lucky,” Peppercorn said, her eyes shining. “I would love to go and see the world! The people who come through here tell me such stories…”

“Then what’s stopping you? You can just walk out of here!”

“I’m not strong enough,” Peppercorn said, “I’m only a girl.”

“So am I,” Poison pointed out.

Meet Poison. She chose her own name and now she’s putting on some thick leather boots and trampling through the razor-sharp grass of her home marsh to get out into the world and rescue her kidnapped sister Azalea from the Phaerie King.

She faces a seemingly endless list of trials; the house of the Bone Witch, a cavern of giant spiders, and the political tussling of realms far beyond her comprehension.

You could be forgiven for worrying that this is just another ‘strong woman adventure’ and that our intrepid protagonist is simply a boy to whom the author has given a girl’s name in an attempt to tap a new market, but Poison by Chris Wooding is a young adult novel published in 2003 and imbued with the strength of both real and fantastical women. It is teeming with female characters who indulge in varying levels of moral ambiguity, from the naïve and good-natured Peppercorn to the twisted and self-serving Lady Asinastra.

A hardy and strong-willed protagonist, Poison pursues her quest with a dogged self-awareness. This story is a meta-fantasy; it is self-aware, and it is self-critical. The characters know that their adventure is adhering to some eerily story-like tropes, and an attempt to rebel against this nearly leads to the collapse of their realm. Its feminism is occasionally clunky, sure, but clunky is better than absent.

Its women are not merely strong, they are real; heroes and villains alike, with vulnerabilities and talents that hinge on their humanity (or lack of) rather than their gender. Poison’s womanhood is in itself a rebellion: her decision to choose Poison as her new name on her name day demonstrates her ability to take a cruel jibe from her stepmother and pull it on, to wear it as a new skin, and to own it. Poison’s harshness is drawn in a deliberate dichotomy to the much softer and sweeter Peppercorn, who she meets on her way to save Azalea. Here we have two women – one a cynical, capable adventurer, the other a “doll that had suddenly found it had been discarded”. Peppercorn plays a porcelain part for much of the story, and is a foil for Poison’s own grappling with what she perceives as the less favourable elements of femininity. Ultimately, neither is an ideal, and both successfully grow.

The author Chris Wooding, who has produced multiple works featuring varied casts of women including The Haunting of Alaizabel Cray and The Braided Path, is not afraid to strike upon issues which may not occur to other male authors, or may seem of little consequence to them. Early in the tale, Poison finds herself traveling alone with a surly wraith-catcher and his grint (a large, lumbering reptile of a non-lethal nature, which is rare for Poison’s world, which hauls the cart they are restricted to while traversing the marsh’s volatile vegetation. Poison notes, with the quiet expectation that women are taught all their lives to internalise, relief that her companion has not taken advantage of the situation by trying to rape her. The observation left me with mixed feelings – it was of course a possibility that had occurred to me on my first reading, but to see it spelled out so plainly made me wonder. Did it need saying? Was I glad that it had been? On the other side of the coin, “doesn’t rape young girls” does not really count to me as an example of a man’s moral fibre, as it has been used here. It’s more of a basic expectation of human decency.

A few unfortunate archetypes do appear; Poison is not a flawless novel championing a new age of feminist fantasy literature. Beauty is epitomised in milk-white skin, and Havisham-style madness makes a gruesome appearance in the portrayal Lady Asinastra, the Spider Queen. In describing herself as “schizophrenic” as an adjective, Asinastra strikes even the less interpretive reader as an ableist construct of feminine “madness” while simultaneously casting inaccurate aspersions on real people with schizophrenia. Poison’s feminism is not intersectional, and its dealings with segregation fall short. Humanity in this book shares a mutual loathing with the other species that inhabit the realms of Wooding’s world, such as Phaerie and Spider, and this is grand and unquestionable, featuring little of the nuance and micro-aggression that pervades the world of real racial discrimination.

Aside from Poison’s occasional grousing, there is no real dispute of the superiority of Phaeries in their lavish castles, or the gruesomeness of the spiders in their webbed kingdom. Each fantasy race is a blank face onto which value is assigned; brutish, beautiful, clever, wicked. A faint ray of recognition for this shortcoming comes from humanity’s condemnation for being “divided”; a call, perhaps, from the author for social and racial unity.

These failings should not go unchallenged, but Poison is still a novel with plenty of offer. It has been a personal favourite of mine for half a decade now, and it was not until I began exploring my feminist leanings that I began to truly understand why. Wooding directly condemns the endless casting of dashing young male heroes sent off to save waif-like women from their doom, and even the most vapid shadows of his female characters turn at the last moment to reveal their hidden depths. Poison is an ardent believer in herself, and does not hesitate to challenge what the world presents her with, if it does not sit well with her. Every so often, a direct rebuttal of narrative norms rears high and jolts the reader, making them ask questions about their own assumptions, too:

“Poison wondered when they had all decided the stranger was male, since physically there was no way to tell in a creature so outlandish.”

Of course, in this instance, when Poison and her assorted party of quest-goers encounter the bizarre and frog-like Myyrk, the narrative proceeds to refer to him as male regardless – but the question has been flagged, and it needles the reader and Poison alike. Myyrk himself expresses surprise that Poison is not a handsome prince.

Fantasy is a genre in need of more feminism – a genre overflowing with stereotypes and cliches, it stands alongside science fiction one of the best narratives for harnessing into critical tools that can lay bare the ridiculousness of the stories we like to tell, and make us think twice about the way we try to tell them. Wooding’s efforts with Poison are by no means perfect, but it’s a start.

Laura is a game design student from Lincoln, UK. She writes on her blog Being Loquacious about feminism, sexuality, mental health issues and fandom. She was previously a game reviewer for the California Literary Review. She can be found on Twitter at @coffinfinate