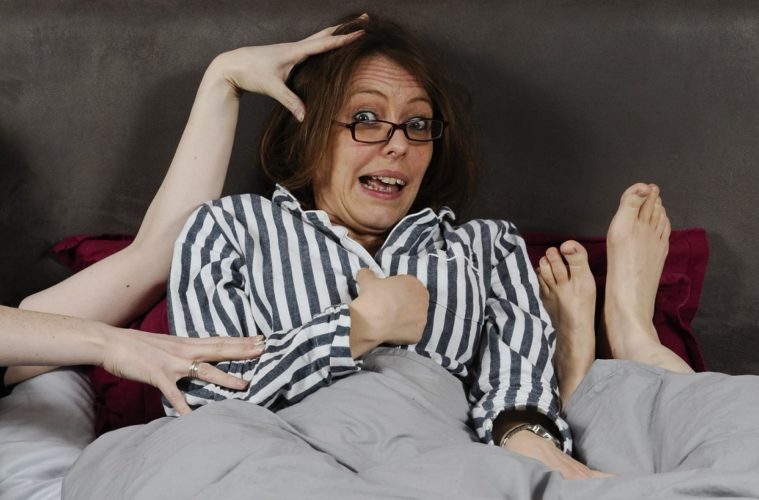 Rosie Wilby asks an interesting question in Is Monogamy Dead? Chella Quint attends this cheeky and enjoyable new show and tries to work out the answer 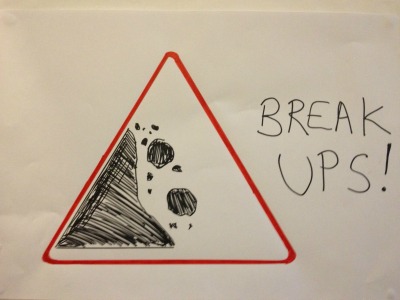 Rosie Wilby asks an interesting question in the title of her show: Is Monogamy Dead? Whether or not you’ve ever wondered this yourself or even care one way or the other, you’re in for an excellent evening, as Rosie deftly weaves real stats, cheeky experiments and hilarious, hand-drawn infographics into a seamless one-hour, one-woman show.

She puts the audience at ease, making small talk, checking out who’s married, civil partnered, single, on a date (which I reckon is very brave and is either going to turn out super awesome or really awkward). Then she launches straight in, telling us all about how several other lesbian couples she’s been close with have recently split up, making her question her own serial monogamy, leading to her plan to develop this show in the name of science. Her last two most recent shows, The Science of Sex and Nineties Woman both also involved factual research, and this consistently ads depth and a real intelligence to her shows. 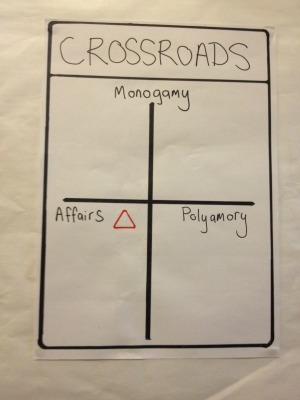 It’s not all highbrow, however. Amid laugh-till-you-snort-worthy 1980s pop culture references, Rosie charts her own relationship journey for us, throwing in historical shout outs to puritanical types like cornflake co-inventor John Harvey Kellogg and even testing his hypotheses on an audience member. (Full disclosure, I was the audience member. She asked me to eat a cornflake. I ate a cornflake. Reader, I can confidently report that said cornflake neither increased nor decreased my level of sexual arousal. You’re welcome.) The atmosphere is positive and the audience participation, which can be annoying in some shows, works really well here.

Wilby shares quirky, hand drawn diagrams of the choices couples make when they reach a crossroads in their relationship, warnings about unrealistic expectations and my favourite: the different shapes that the connections in a polyamorous relationship can take. This comes across as very tongue in cheek to those hip to the polyamory jive and is charmingly educational for those who are new to the concepts.

The survey is presented as a Family Fortunes game on the flip chart. The answers, some of which are completely unexpected, divide the room

Watching couples in the audience adds an extra layer of entertainment as they try to clock each others’ reactions before laughing at a joke or answering a question with a raised hand or applause. Whether they’re with one partner, multiple partners or on their own, the audience has a great time throughout: joining in with pop quiz questions, winning small prizes, laughing along. However, the results of an anonymous survey really shake up the crowd; this is presented as a Family Fortunes game on the flip chart and we are asked to guess what behaviours those surveyed would consider infidelity. The answers, some of which are completely unexpected, divide the room! You will have to see the show to find out as I’d hate to spoil it, but I will say that it is fascinating.

The show concludes with a chance for the audience to vote on whether or not monogamy is dead. In a Peter Pan panto “I believe in fairies” moment, Rosie invites those who wish to keep monogamy alive to applaud, and then proposes marriage to us, throwing confetti on those who accept.

Reader, I married her.

You can catch Rosie Wilby: Is Monogamy Dead at a number of venues around the UK this month:

Pictures courtesy of Rosie Wilby are of Rosie Wilby, looking horrified, in bed with two other sets of hands and feet poking out of the covers, indicating that she is not alone; a doodle of a road sign with falling rocks and the word ‘breakups’; and a hand drawn diagram of a crossroads, with monogamy at the top and ‘affairs’ and ‘polyamory’ written in the corners.

Chella Quint is a queer, Jewish, atheist, lesbian, feminist, four-eyed comedy writer, performer and education researcher from Brooklyn, New York. She loves comedy activism, science communication, libraries, intersectionality, social justice, chocolate chip cookies, dinosaurs, outer space and deconstructing the media. She lives in Sheffield, which is exactly like Brooklyn, but farther away from the Hayden Planetarium. She is @chellaquint on twitter, and her website is www.chellaquint.com