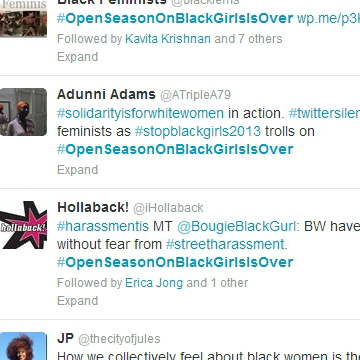 This is Estella Adeyeri’s first guest post for The F-Word. She’ll be blogging for us throughout November. Estella has recently completed an MA in political philosophy, and has a vested interest in examining social issues through an intersectional lens. She is also an avid music fan and an occupational daydreamer. Tweet her at @EstellaAdeyeri

So last week I noticed this trending on Twitter: #stopblackgirls2013.

This hashtag was accompanied by other assorted variations too – #stoplatinagirls2013, #stopwhitegirls2013, and others. The purpose of each appeared to be to depict women from each designated group in the guise of their most sanctioned-against stereotype, imploring them to “stop”, and generally whipping up a flurry of vile online hatred of women and in particular women of colour. In consideration of the sometimes coded and oftentimes flagrant prejudice that I routinely hear reports of, witness and personally experience, this really shouldn’t have shocked me all that much.

The ridicule had an added ugly trait – the mainstream associations that supposedly represent a believed trait of each identified group (e.g. for us black girls, tropes depicting us as ‘fat’, ‘ghetto’, and ‘hypersexual’) were not only ridiculed, but the idea that women contained within these roles could ever see themselves as beautiful, as worthy of public ‘selfie’ fodder in our supposed ‘share’ generation – this idea that they could consider themselves welcomed active participants of this culture was presented as so outrageous that it in itself constituted the joke. Selfies are for Miley Cyrus and Cara Delavigne. Plus-sized black women with a multi-coloured weave? Cue laughter, disgust and shame.

Let me make this clear: the bodies of women, cis or trans, are not automatically available for public humiliation, denigration and mockery. This seems so obvious to me that I am baffled by the need to state it at all. Yet routinely this basic idea, stemming from the simple and surely universal notion of mutual respect between persons, is far too regularly attacked, be it via the media, the internet. And from the language spewed by regular and otherwise seemingly affable average Joes and Janes.

In perpetrating such behaviour, women and in particular marginalised women are shamed. We are shamed for being fat, being dark, for having afro hair, for being deviant, for being promiscuous, for being prudes, for being LGBTQ, for being poor. The list continues. Often this equates to being shamed for merely daring to exist. This rhetoric forms a part of a relentless attempt to invalidate our sheer existence, to annihilate any positive sense of self, and to reinforce the idea that we are other, we are not worthy, and we most certainly do not belong.

Shaming is (amongst many other things) a silencing tactic, with an intent to negate any attempts at providing support or arguments in favour of our rights as human beings due to perceptions that some aspect of ourselves is intrinsically ‘wrong’.

Who is going to listen to our repeated insistence that we be taken seriously, are respected, and are allowed to fully participate within our own societies if our very humanity is eroded in this way? If we are constantly attacked with this overwhelming claim that, by our very nature, we are not worthy of such privileged standing? If our cultures and very natures are routinely mocked, misrepresented and misunderstood, how do we even begin to approach conversations surrounding the deconstruction of our multi-layered oppressions?

There will always be those who refuse to submit to such framing, who are willing to challenge the status quo in various ways – from shouting back in cyberspace, to simply insisting that we are seen, heard and valued. Whilst I sometimes fear that these messages are not reaching those who need them most, I am still grateful for these efforts, for these beacons of support when the constant barrage becomes too wearying. These remind me of why I for one refuse to be ashamed of my status as a woman of colour. That feeling should be the preserve of those who continue to hold pathetic, outdated and wholly unwarranted assumptions of their inherent superiority based on prejudice and accidents of birth.

Image is a selection of tweets from the hashtag #OpenSeasonOnBlackGirlsIsOver, a phrase which was coined by Black Amazon on Tumblr in 2011 and has gained a new lease of life on Twitter in response to recent abusive Tweets